France looked to win their first Guinness Six Nations championship since 2010 as they hosted Scot...

France looked to win their first Guinness Six Nations championship since 2010 as they hosted Scotland on Friday night.

The fixture was postponed from Round 3 of the championship after several French players and backroom staff tested positive for COVID-19.

France came into the match knowing that they either needed to win by 21 points and score four tries, or score six tries and win by 20 points in order to win the title. If they could not, then Wales would take home the championship.

Despite taking an early lead with a Romain Ntamack penalty, France quickly found themselves on the back foot after Duhan van der Merwe got the visitors on the board.

After a lineout deep inside the French 22m, Van der Merwe joined the maul and capitalised to crash over the line for the opening try.

Duhan van der Merwe with the opening try in Paris!

Finn Russell went on to extend the Scottish lead with a penalty, after having already converted Van der Merwe's try.

The South African-born winger went from hero to villain, though, as a skip-pass and a missed tackle from Van der Merwe allowed Brice Dulin to cross over and retake the lead.

The Scottish woes would be compounded before half time, as not only did Ntamack add a penalty to their lead, but Stuart Hogg was shown yellow just before half time for repeated offences by the visitors.

France were unable to capitalise on their penalty kick to touch, though, and Scotland took the teams to half time, trailing by three. 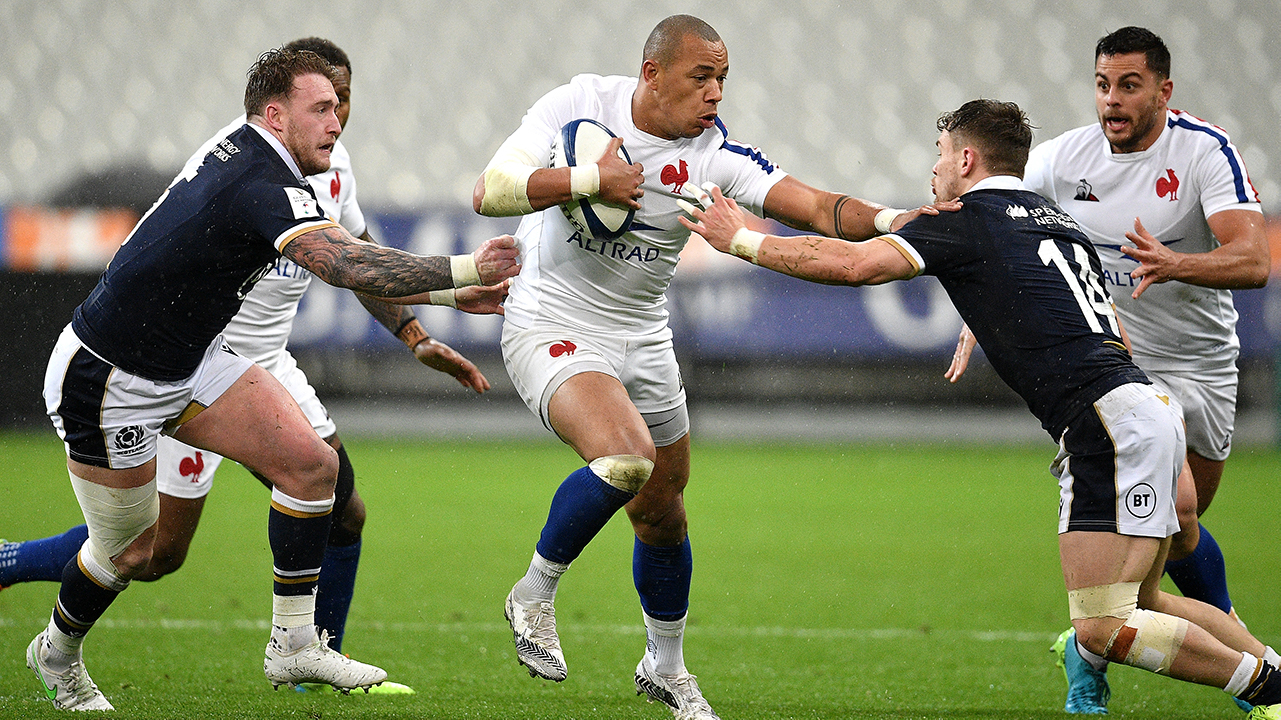 With a man down at the start of the first half, Scotland were unable to keep a flying French side away from their try line.

A powerful, long drive from Gael Fickou up the midfield put France in great field position deep inside the Scottish 22m.

Although Scotland were able to push the French back, their flare was on show after Dulin took a quick tap inside his own half, before offloading to Ntamack, who in turn eventually got the ball in the hands of Virimi Vakatawa.

Vakatawa offloaded to Damian Penaud, who chipped the ball on and eventually scored a great try to take the hosts eight points ahead.

WHAT A TRY! 🇫🇷

With Hogg back on the pitch, the Scottish defence looked much more solid, particularly covering the back. Russell put Scotland back within five with a penalty to make life that much more difficult for the hosts.

Scotland took the lead through a try for Dave Cherry with just over an hour played to almost guarantee a Welsh Six Nations title, as Russell added the extra points.

Les Bleus were determined to earn their victory, though, as they proceeded to regain the lead through a Swan Rebbadj try with 15 minutes left to play. Ntamack was unable to add the extras, meaning that France still needed another 18 points for the title.

FRANCE ARE NOT GIVING UP! 🇫🇷

With the game in the balance, Scotland were dealt a massive blow with a red card to Russell, for fending with the elbow directly to the neck.

However, with seven minutes left in the match, Baptiste Serin was sent off with a yellow card for entering a maul from the side, after repeated infringements from the hosts.

As the game entered its final minute, Wales were guaranteed to win the championship, however neither side were willing to let the match end.

After a penalty which put Scotland inside the French 5m, Scotland eventually crossed over to end the French hopes of a final victory. Van der Merwe finished off a great try to win it for the visitors. Hogg added the conversion to win 27-23.

Wales are the 2021 Six Nations Champions.