Alan Quinlan joined Ger and Nathan on this Monday's OTB AM to reveal his Ireland depth chart for ...

Alan Quinlan joined Ger and Nathan on this Monday's OTB AM to reveal his Ireland depth chart for the backrow as we continue the countdown to the 2020 Six Nations.

Andy Farrell's options at the base of the scrum are arguably the deepest in any area of the pitch, with Dan Leavy back fit and Gavin Coombes also emerging on the scene in recent months.

However, Quinny doesn't see Andy Farrell making too many adventurous calls, given the levels of talent and versatility he has at his disposal. 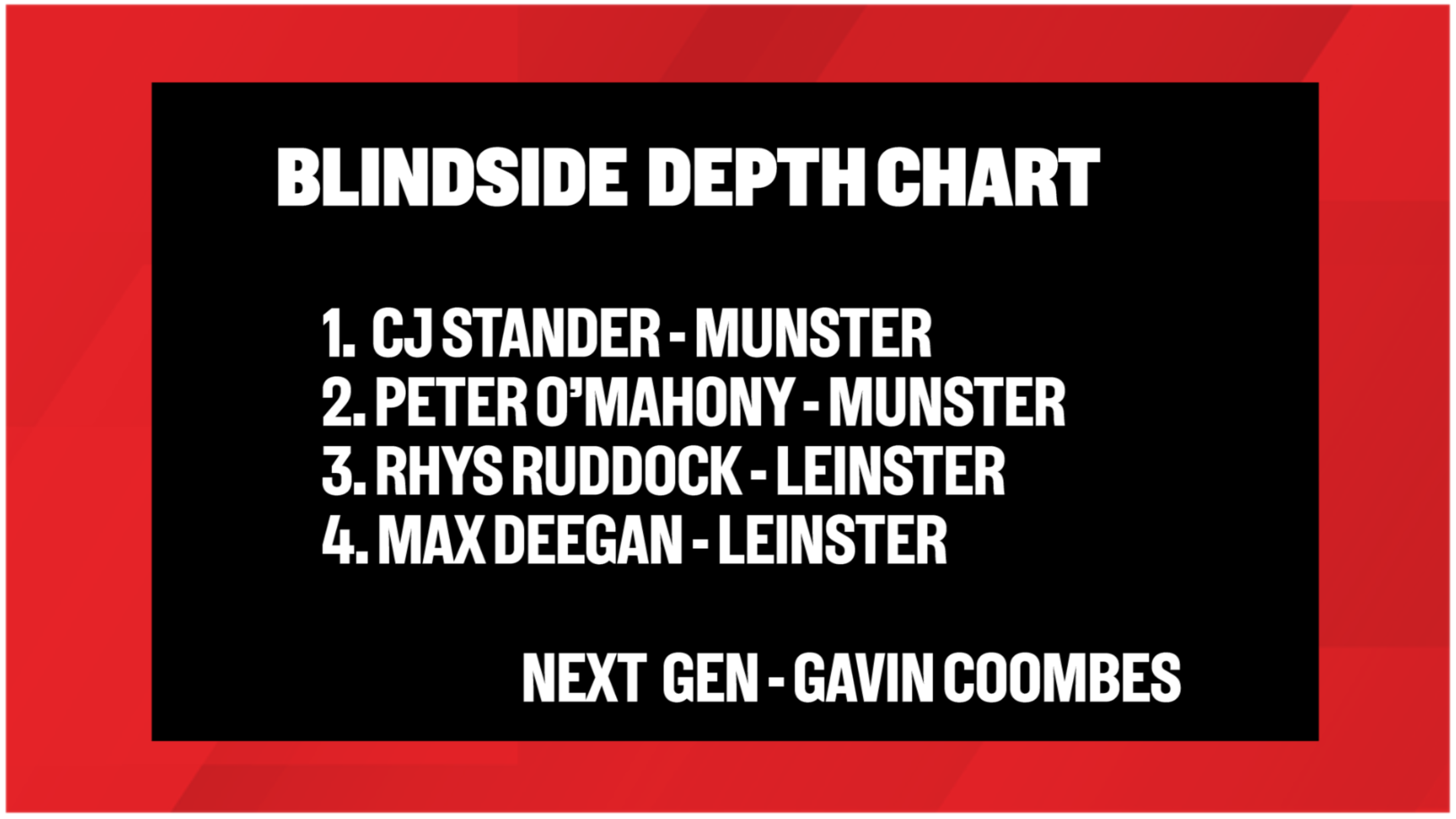 Right across the backrow, Quinny believes Andy Farrell's best weapon is the versatility of the group, with CJ Stander and Caelan Doris both capable of starting at blindside and number 8 if needed.

However, he believes Stander is the most likely ma to wear the number 6 shirt against Wales in the opening 6 Nations game against Cardiff.

Equally, should Stander fall to an injury, he believes Peter O'Mahony would be likely to switch from openside, before Farrell looks outside his starting group.

"They're all interchangeable. Out of 15 names that I could give, I've only given 12 for those three positions across the backrow because obviously if Stander doesn't play at 6 and was injured, there's every chance that O'Mahony will move to 6 and van der Flier, Connors or Leavy will go 7. The same applies to 8, if Doris doesn't play then Stander will, so it's not a case of being pigeon-holed into one position.

"Behind Stander, the next 6 would be O'Mahony. For me, Rhys Ruddock has been brilliant for Leinster, ever dependable, is a fantastic player and doesn't get the credit, or have the flamboyance that others have. He's relentless in everything he does. He'd be my next 6.

"An up and coming one is Gavin Coombes this year. He's played really well with Munster, a big physical presence. If he can add more to his game he can come into the reckoning. Any of these guys can jump up the line if they have a good game. It can change the prerogative," Quinny said.

As well as the names mentioned, Alan Quinlan also highlighted the ability of Ireland's second rows to play across the backrow for particular games. Just as England have often used Maro Itoje at blindside flanker for games in which they require the power of an extra second-row, Quinlan says Ireland also have that option.

"If you play England or South Africa, or you're looking to have more physicality you could do that. Lots of those second rows can play in the backrow; Tadhg Beirne, Iain Henderson, or even someone like Ryan Baird if you want to get some of his athleticism into the team. That's something that could happen, Tadhg Beirne has played a couple of times there and is familiar with the backrow. He's probably very comfortable playing there. It's down to horses for courses," he said. 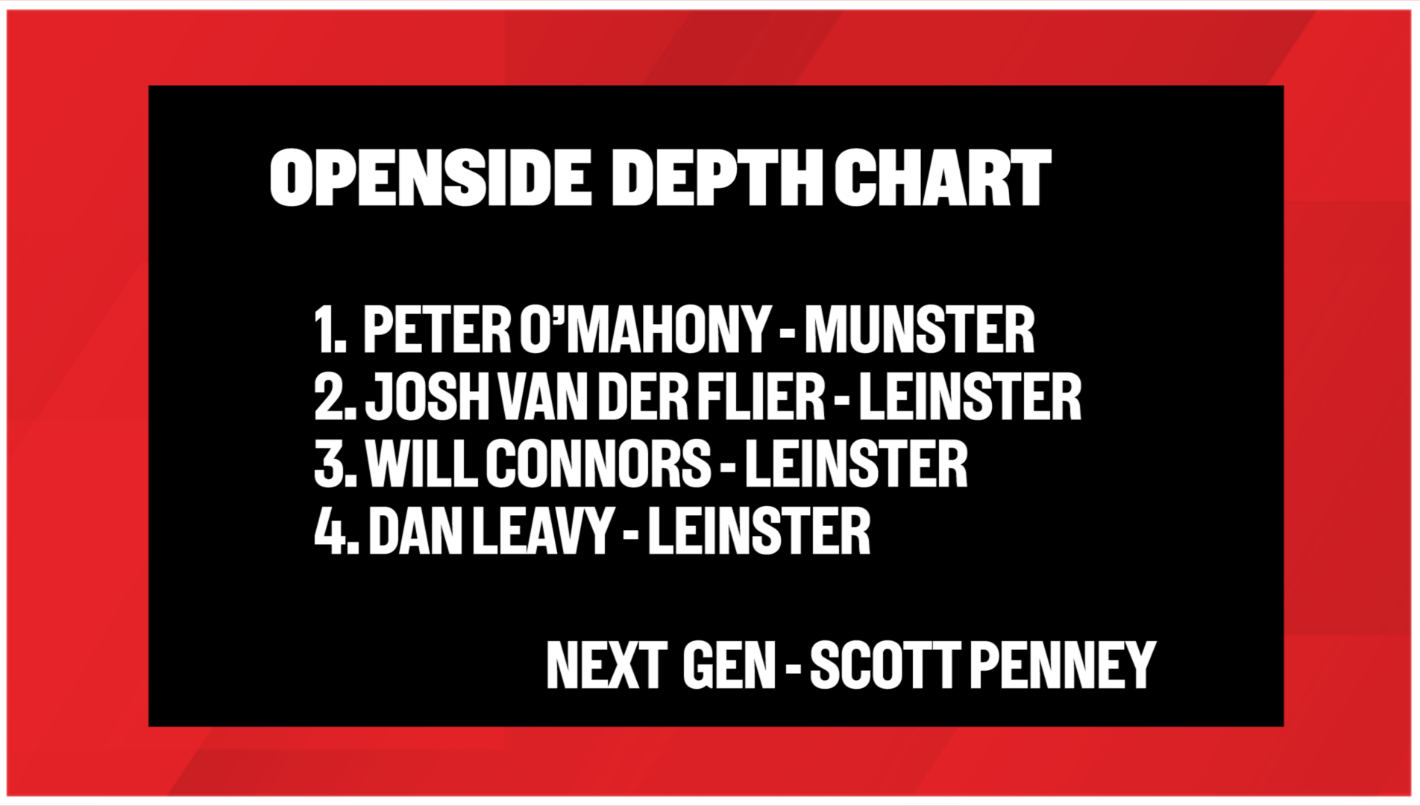 At openside flanker, Peter O'Mahony's form since reugby's return from lockdown in August gives him the nod in the seven shirt, a position he's been playing more of with Munster since Gavin Coombes forced his way into contention at the province.

And after that, Quinny say the door is wide open for a trio of Leinster blindsides to fill in with ease.

"It's hard to put them in order to be honest, I'd like to make that point!

"Peter O'Mahony at 7, he probably has the jersey and will get it going forward for a while, but they you have Van der Flier, Connors and Leavy, how can you separate those?

"Leavy is still working his way back, and it does take a long time when you're out for that period to get that fitness up and intensity and hardness in the body. Van der Flier and Connors are neck and neck at number two, and then Leavy is next in line.

"Scott Penney is the one where there's been a lot f talk about in the last 18 months or two years, and his ability as well. He's probably the up and coming one.

"When you start putting these names down, you think how are these guys going to stay at Leinster if they want to play for Ireland, I know it's a conundrum Leo Cullen has found himself in", he says. 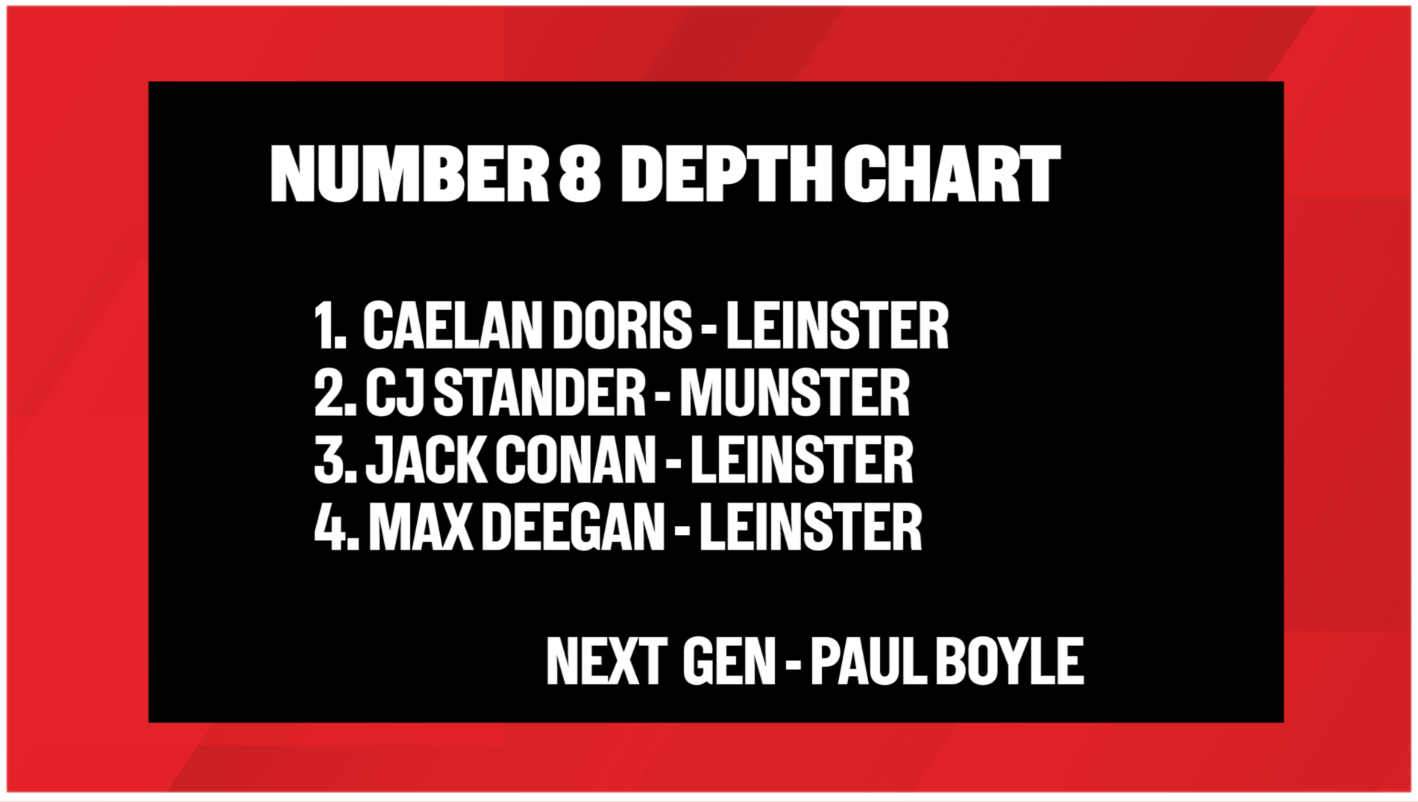 "Doris is at the top, because he's made that jersey his own now, he's so talented, has a bit of everything in his game and it's top quality throughout. I think he's going to be a bit more physically imposing, he's still very young. I'm sure he'll be a more confident player putting on the Ireland jersey.

"If he got injured, they wouldn't leave Stander at 6 and bring Conan in at 8. I think they'd start Stander and look to move someone to 6.

"Jack Conan - I'm a fan of - is a brilliant player. He's been very unlucky with injuries, and he hasn't kicked on to the next level, he has the ability to do that.

"The up and coming one is Paul Boyle, I picked from Connacht. He's done really well and has become a leader in the Connacht team. You could add Eoghan Masterson in there as well who is a really talented player. They are the five for number 8."

Join us this Thursday on #OTBAM as Ronan O'Gara picks his depth chart for Ireland's half backs.

Check out our previous depth charts, with Keith Wood analysing the Irish front row for the Irish depth chart and Malcolm O'Kelly making his call on the second row.