The Premier League has said improvement is needed in Video Assistant Referee (VAR) procedures, following a meeting in London today.

A meeting with shareholders from the clubs came about after a number of controversies involving the technology during its debut season in the top flight.

Referees' chief Mike Riley admitted to the delegates that improvements to VAR were required.

“There is going to be an investigation.

“There was a lot of debate. We are making good progress. What I can say is that VAR is alive and kicking.

“This is a brand new system. We just have to be a bit more patient. We will get it right.”

In a statement today, the Premier League said there will be more information given to fans from now on.

"This will explain in more detail what is being checked. 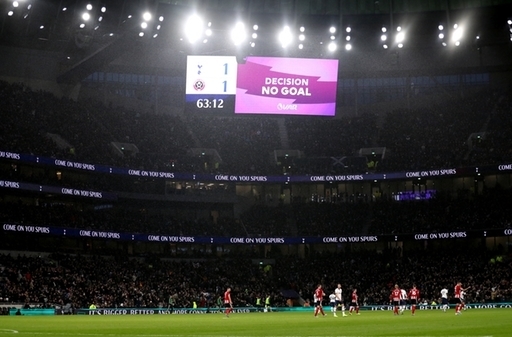 VAR is used to check Sheffield United's David McGoldrick's 1st goal before it is disallowed during the Premier League match at Tottenham Hotspur Stadium, London.

"This enhancement will be delivered in December 2019."

It was also said today that Premier League stadia will not shy away from showing video footage of incidents on the big screens.

"Importantly, the Premier League will continue to show the definitive clip or image for all overturned decisions in stadiums and remains the only major European league to do so.

However, IFAB protocol prevents video clips or stills being shown in stadiums until the referee has made a decision.

The same protocol also does not permit direct audio communication from the referee or VAR to fans."

Some figures were also pointed to in the Premier League's statement that they attest prove the system is helping to get big decisions right.

"The shareholders were also updated that the introduction of VAR has improved the accuracy of match officials around "key match incidents" (KMI).

"With VAR this accuracy has risen to 91 percent this season."