Gaelic Players Association co-founder Donal O'Neill believes the GAA's deal to give funding to the the players' body was a "strategically brilliant" move by the association.

Under the agreement, the GPA receive either 2.5-million Euro or 15% of the GAA's commercial income, whichever is higher, each year in funding.

39% of their income in 2019 came from GAA headquarters and O'Neill says that money has meant the association now deal with a partner in the GPA, rather than a body outside of their control.

"The organisation is obviously quieter," the Armagh native told Off The Ball. "There's a whiff of the civil service about it because there's a set budget and there's a group of people who are doing their best to spend that wisely.

"Any players organisation worth their salt, anywhere in the world, is on a percentage of commercial income. We knew that and it was always part of our ambition in the early days of the GPA.

"The only currency that the GAA truly understands is money and we knew that and that turned out to be the case.

"When we went about our business to disrupt things like the All-Stars, to create our own awards, to agitate  for further commercial opportunities, that upset the GAA and it upset them to the point where ultimately they came to the table and negotiated a deal.

"The GAA is run very much a professional sport, from a management and administrative level...the GAA are in the driving seat and they ultimately control the finances in and around the support, including the GPA."\

On this morning's OTB AM, Meath legend Bernard Flynn said he didn't know what role the GPA now have in fighting for players and he feels they could do without the GPA.

"Of course they are," O'Neill said when asked if the GPA are compromised by their deal with the GAA. "The reason that there's a financial transaction is because there's a give and a take, that's what people must remember.

"I remember back in the day, Dessie (Farrell) took counsel from Gerry Adams at one point, and the advice was "if you're going to go in and take the dollar then make sure you get what you're going in for, go in hard and strike that deal once because you will only do it once".

"So that ship has sailed and the deal that was cut between the GAA and GPA was financially good for the GPA but strategically it was brilliant for the GAA.

"They're fully aware that they're receiving enormous sums of money from the GAA and with the best will in the world, that will impact.

"The relationship we had with Croke Park back in the day, it was very tetchy, I was bad cop, Dessie was better cop and someone else was good cop.

"We literally went at each other across the table...but that's not what this is any more. A deal was done and that was a deal done to the best of the abilities of the people involved at the time and it's been honoured on both sides.

"It was probably a better deal for the GAA in the long-term, truth be told and that's what you're seeing. But that's business, it gives the GAA control.

"When we were agitating on the outside, it's very difficult to control that...they tried to buy me over and when that was rebuked they didn't know what to do, because it wasn't about money at that point.

"Now the GPA has entered an agreement that is pretty much on the GAA's terms and that's why that large sum of money is going across the table. It's because the GAA are getting something meaningly from it, and that's that trade.

"The GPA are essentially endorsing the GAA by taking that money." 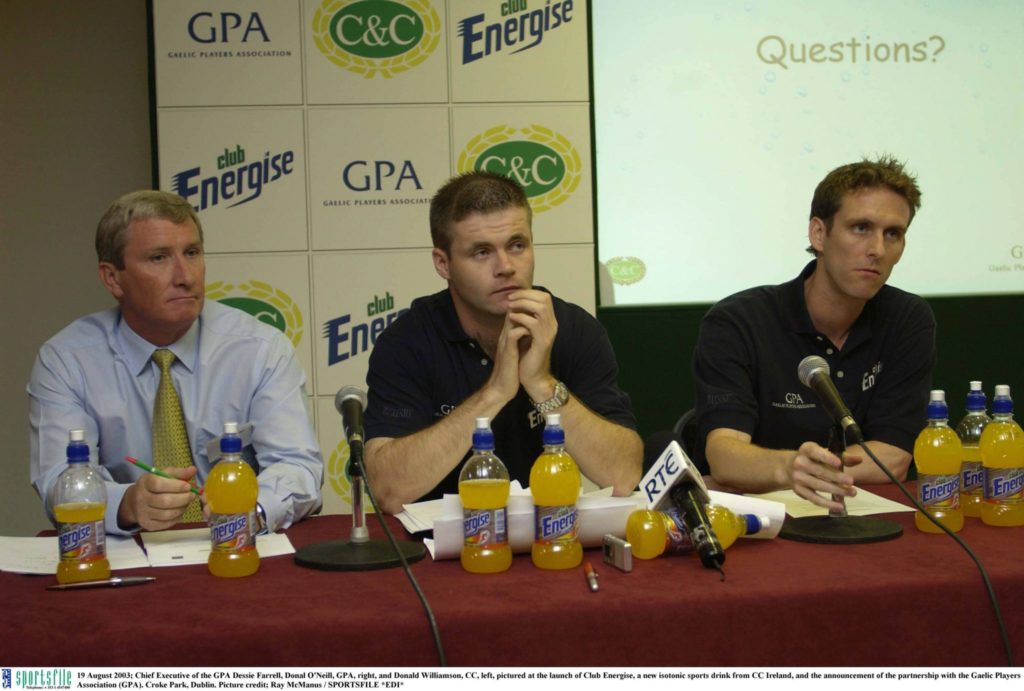 O'Neill feels it's up to officials within the GAA in Croke Park to address issues around the fixtures calendar, rather than the Gaelic Players' Association.

"The club and county relationship is abnormal in the context of sport and it's abnormal because, for want of a better of a better term, a professional code and an amateur code.

"They're not good bedfellows and there is no solution to that without some kind of shift of seasons. That's the big problem and that's not a GPA problem, that's a GAA problem.

"A part of me has always believed that (professional inter-county) is inevitable and a big part of that is because the GAA won't stop going down this very commercial line that they've taken.

"The sport is very well run at a senior management level, when you look at the business of the GAA. But the reality is that it could be brilliantly run, it could do even better.

"There's so much more the GAA could be doing, they could be doing more for county boards and they could even the keel a bit more than what we're seeing at the moment but they don't want to do those things.

"We offered to put a structure together that would equalise counties, that would batch sponsorships...but it's not fair, it's elitist and how do you change that? You go back to the GAA, it's all on their doorstep."