Stephanie Roche has been playing in Italy for the last year.

But this month, she's been back in Dublin as part of her role as Londis' ambassador for their sponsorship of HELL & BACK, which will also raise funds for Pieta House.

And with her season at Italian club Florentia over, she dropped in for a chat on Team 33 with Enda Coll, Jonathan Higgins and I.

You can listen to the full interview right below, here, or on iTunes. Or you can watch above via the Off The Ball YouTube channel.

The 29-year-old Puskas Award runner-up touched on life at club and international level.

At club level, she had missed the first half of this past season due to injury. But Roche did earn game-time in the second half of the campaign as the Florentine club finished in a creditable top-half sixth place.

And now the challenge is to break back into Colin Bell's Ireland squad for the start of the 2021 European Championship qualifiers. 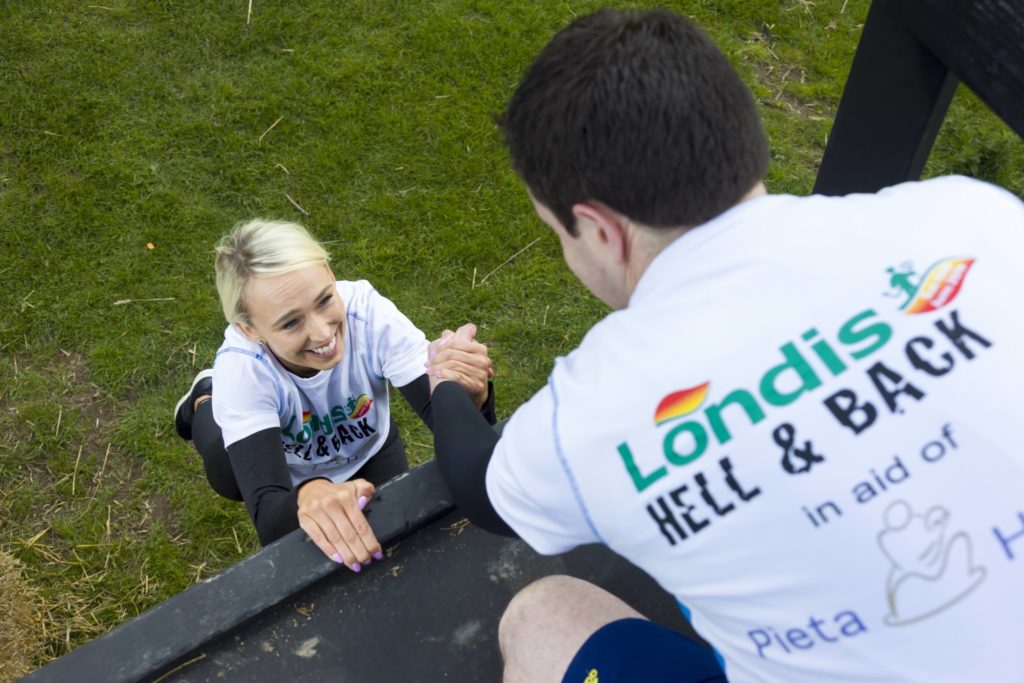 Ireland International soccer star Stephanie Roche gets a helping hand today as she helps Londis announce its sponsorship of HELL & BACK for the third year and to reveal a new charity element in aid of Pieta House. The run takes place on the 15th and 16th June at Killruddery Estate, Bray, Co Wicklow

The ex-Peamount United forward also touched on the changes since she and her Ireland team-mates appeared at a press conference pointing out inadequacies in the resources made available to them by the FAI.

And she also touched on the pros and cons in terms of effect from the Puskas Award nomination from 2014:

"I wouldn't say it was a hindrance because it's an unbelievable experience for me as a footballer to be able to mix with those types of footballers," she said.

"But at the same time, I think a lot of people only know of me in new clubs because of that. They might not have seen me play properly before. Maybe going to Florentia was a bit different because I'd played at Sunderland for three years."

Ireland international Stephanie Roche was on hand to help Londis announce its sponsorship of HELL & BACK for the third year and to reveal a new charity element in aid of Pieta House. This year, Londis will aim to raise funds for its charity partner Pieta House with ‘HELL & BACK for Joy’, giving people even more reason to sign up and take part in the thrilling challenge.

HELL & BACK is Ireland’s toughest physical and mental endurance challenge, attracting thousands of participants through a series of adventure events. Open to everyone and with challenges to suit adults, teens and tots – the first HELL & BACK series will take place on June 15th and 16th this summer. In the lead up to, and during the HELL & BACK event, Londis will raise funds for charity partner Pieta House and aim to attract record numbers to raise money for a worthy cause by participating.

Londis has worked with Pieta House for several years, running the ‘for Joy’ fundraising events in support of the charity. In 2016 a parachute jump fundraiser called ‘Jump for Joy’ raised €42,000. Then in 2017 ‘Climb for Joy’, a fundraiser climbing Carrauntoohil, raised €113,000. And in 2018 the ‘Cycle for Joy’ event, where participants cycled the greenway from Achill to Westport, raised €129,000 for the charity. In 2019, Londis sets a new challenge with ‘HELL & BACK for Joy’ taking place on the 15th June.

2019 FIFA Women's World Cup could be best yet