Cillian O'Connor's incredible scoring abilities were not the only thing Mayo lost due to his inju...

Cillian O'Connor's incredible scoring abilities were not the only thing Mayo lost due to his injury this year, according to Aidan O'Shea.

The Mayo senior footballers do not look like a side that is missing the greatest scorer that the county has ever produced, with a total of 10-57 scored against Sligo, Leitrim and Galway as they won their 48th Connacht Senior Football Championship.

Players like Ryan O'Donoghue, who assumed free-taking duties, Oisín Mullen, Tommy Conroy and Jordan Flynn have all stepped up to the mark to help fill the void left by O'Connor's absence that isn't just about kicking scores.

"Losing Cillian, the top scorer in Championship history was always going to be a challenge, there's no doubt about that," O'Shea told The Hard Shoulder on Newstalk.

"There's always going to be times when people drop out due to injury. Unfortunately, Cillian got a serious one but it was an opportunity for somebody else to step up.

"For people on the outside, they're probably looking at the scores he kicks but it's as much the intangible and the stuff we see off the ball and the press he does up top, that we needed to replace.

"It's not the responsibility of any one person coming in, it's more a collective thing that we all needed to increase our outputs a little bit just to account for it but so far the guys who have come in have done really well.

"I know Cillian is doing a huge amount of work in the background, in terms of forward play, and the free-taking with Ryan and just trying to help in whatever way he can." 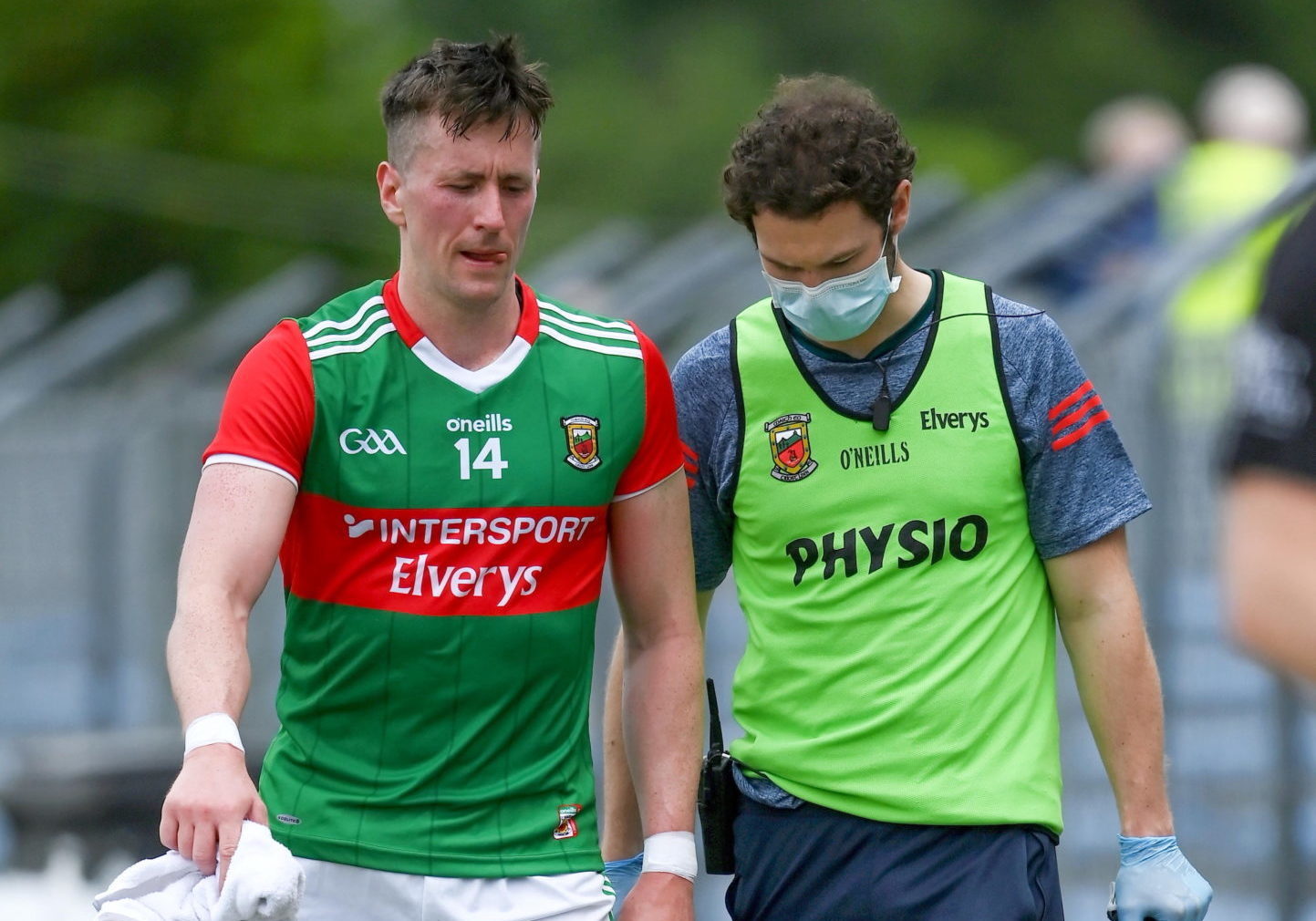 13 June 2021; Cillian O'Connor of Mayo leaves the pitch with an injury during the Allianz Football League Division 2 semi-final match between Clare and Mayo at Cusack Park in Ennis, Clare. Photo by Brendan Moran/Sportsfile

Mayo may be missing the leadership that O'Connor brings to the team on the field of play but that certainly is not something the team lacks when O'Shea is around and it has not gone unnoticed by the man who matters most, James Horan.

The Mayo boss was full of praise for his efforts in the Connacht final, "You saw his tackling out there. He targets key turnovers and turnovers are huge. He got a great one off Shane (Walsh) that created a goal chance for us. He’s very, very good at that and he drifts around the place. Very clever player."

Horan's continuous moving of one of his key chess pieces is something that O'Shea says he enjoys.

"I'm not sure in the modern game, there's any real positions anymore, it needs to be pretty fluid," said the 31-year-old Breaffy clubman.

"I'm not too hellbent on playing one position or the other. I'm probably going to play three or four positions in a game and I need to be able to adapt to that. It's not something that I get too worried about.

"In the lead up to a game, James will talk to me about whatever he wants me to do and these things change once the game starts anyway. In a couple of weeks time, James may have a different role for me and I'm happy to accept."

That different role could be against Kildare or Dublin who meet in the Leinster Senior Football Championship final this Sunday, with the winners facing O'Shea and co in the All-Ireland semi-finals a fortnight later.

Dublin, as ever, are hot favourites to win but even if they do there are many doubters of the Dubs who have lost a lot of key players this year including inspirational captain Stephen Cluxton and sweeper Cian O'Sullivan.

However, like any good inter-county footballer, O'Shea insists that he has not seen too much of either team this year.

"We don't know who's going to come out of that game yet. We'll look at both of them in the same way as we would with anyone else.

"We were in Division Two as well this year so we didn't have an opportunity to play some of the top teams that are still in the Championship.

"We're quite young, a lot of learning has been done over the last eighteen months and continues to happen week on week.

"We need to just focus on ourselves regardless of opposition and hopefully we can put a performance together that's good enough to get us over the next step."