The Manchester United hierarchy believes they may have the makings of another 'Class of '92' among their ranks, according to Daniel Harris,

Speaking on Tuesday's OTB AM, Harris highlighted the excitement surrounding the likes of James Garner, Mason Greenwood, Angel Gomes and Tahith Chong within the club.

"They haven't had a lot of minutes," Harris conceded, "and yes it is true that they wouldn't even have those minutes without an injury-crisis."

"[However], there definitely is an idea to get as much out of the young players as they can.

"I know that the club think Garner, Chong, Angel Gomes and Mason Greenwood could be Manchester United players for the rest of their careers.

"They think they've got a 'Class of '92' standard of young player there."

Partially satisfying "the philosophy, identity of the club," Harris understands that one particular bonus of such a successful production line would be the savings made by the club's American owners. 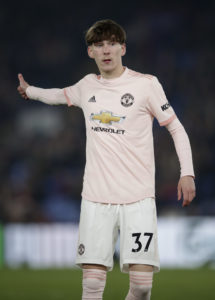 Contending that the club is a "happier place" under Solskjaer, Harris pointed to the emergence of James Garner during a mid-week Premier League tie as evidence of this.

"There's some footage of Jimmy Garner coming on at Crystal Palace last week," Harris noted, "and you can see how delighted everyone on the bench is for him that he is having that moment."

"I heard an interview with Rio Ferdinand earlier and he'd been to the training-ground, where [under Jose Mourinho] a lot of ex-players had not felt comfortable doing that.

"Everyone around the club is happier."

With the younger talents being afforded opportunities under Solskjaer's as-yet-temporary reign, Harris similarly believes that if the Norwegian is given the job on a permanent basis, these same young players will be given every chance to flourish.