The majority of those involved in Ladies Football don’t think it’s feasible for this year’s TG4 All Ireland Championship to be played.

The LGFA surveyed 3,096 of the game's stakeholders last weekend.

Of those, 71 per cent don't think it will be feasible to play this year's All Ireland Ladies Football Championship.

Last week, the LGFA conceded that if it were to go ahead, the championship would not take place in its usual format.

In a statement, they say, "As it is unlikely that inter-county games will be played before October at the earliest, the LGFA is now recommending that inter-county training should cease for now, and only resume when it is advised to do so."

The surveyed group are split almost down the middle when it comes to playing football at all this year.

51 per cent think football at some level will be possible this year, while 49 per cent do not. 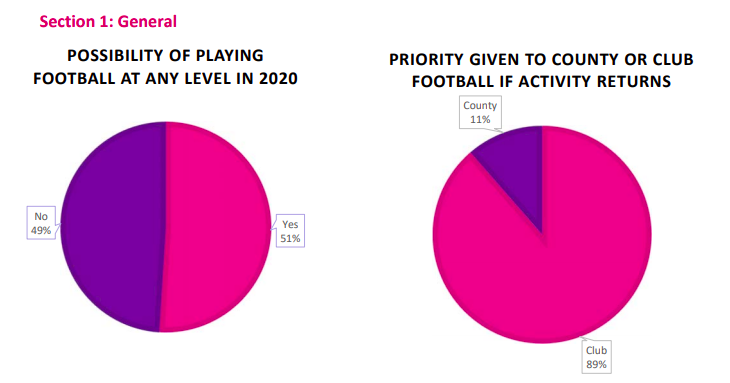 The ladies gaelic governing body says there will be a phased resumption of training at both club and county levels, to allow players to prepare for a return to play.

County footballers are almost as skeptical about a championship being played, with 66 per cent feeling it won't be feasible.

However, if it does come to pass then a resounding 95 per cent would be open to playing matches behind closed doors.

52 per cent of club players feel it will be possible for the club game to pick back up this year.

While exactly half of the 2,060 club players survey feel the emphasis should be on a meaningful return for the club game.

Meanwhile, 74 per cent of club managers feel they should play the TG4 Championship later in the year with the initial focus on club games.

The majority of nearly all of those surveyed would feel more comfortable with an October resumption of action.

Speaking about the results, LGFA President Marie Hickey commented: "I would like to thank all of our stakeholders who engaged in the surveys that were sent out, and completed last weekend.

"The various responses made for interesting reading and it was important to gauge the views of players, managers, referees and officials.

"We all look forward to the time when we can safely return to training and playing games.

"Until then, I would once again urge all of our members to continue adhering to current Covid-19 guidelines, and I wish everybody well during these challenging and unprecedented times."

Waterford unable to fulfil Sligo fixture due to COVID-19 case