John Giles maintains that Jurgen Klopp is still a "one-trick pony", but his clever recruitment has helped solve Liverpool's defensive issues - propelling them into pole position to land a first Premier League title in more than 20 years.

At the halfway stage of the season, the Reds sit top of the league, six points clear of Tottenham and seven ahead of Manchester City. Their 19-game unbeaten run in the league this season has been credited mostly to the defensive improvements brought about with the purchase of centre-back Virgil van Dijk and goalkeeper Alisson Becker.

Speaking on Thursday's Off The Ball, Giles praised the German's ability to transform Liverpool's squad and turn them into this season's team to beat, while staying true to his attacking values.

"He's improved the personnel, but I think his philosophy is the same," he said. "What he was trying to do as a one-trick pony - which is a very good trick by the way - was to [focus on attacking]. But they were conceding goals left, right and centre.

"What they're doing now is they're scoring goals like they did last year, maybe more, but they're not conceding them.

"He's improved the defence no doubt, but he's still got the trick of going forward, which is a great trick. The lads are going for it, but they're not conceding the stupid goals they were letting in last year."

Van Dijk is up there with the best... 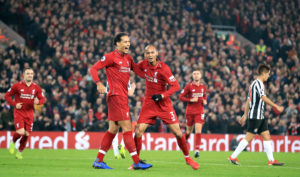 Van Dijk has been hailed as the leading figure in Liverpool's defence and questions hang over him as to whether he is one of the best defenders in the club's history.

"I think it's always a little bit exaggerated. I think he's done very, very well for them. But they do have a new goalkeeper and they have Robertson as well.

"He's probably the best left back I've seen in the league this season. Gomez, who's been injured for a very long time, is coming through as a top-class player.

"So they actually have a new defence. Van Dijk is very good, he's very dominant and he's good on the ball.

"I'm not sure he's as good as John Terry was when it came to throwing his body on things around the edge of the box. I'm being a bit picky there but his influence of Liverpool has been very, very good.

"He's up there with the best. I mean, when you had [Alan] Hansen and these guys playing at their very best, I think it's right to be comparing [Van Dijk] to them.

"He's been a terrific influence for Liverpool since he's been at the club.

"But they have a new goalkeeper - it's all of the defence. It's completely different to how it looked 18 months ago."