The new GAA inter-county season will get underway with the first round of the Allianz National Hu...

The new GAA inter-county season will get underway with the first round of the Allianz National Hurling League on May 8th and 9th with the Football Leagues starting a week later.

The Association's planned 27 week inter-county programme has been back to 20 weeks, which means that there will be no qualifiers in this year's All-Ireland Senior Football Championships, with the provincial football competitions getting underway in late June.

There also won't be a Tailteann Cup competition this summer with London and New York not part of the Championship. The All-Ireland Senior Football final is set to played on the weekend of August 28th and 29th.

The All-Ireland Senior Hurling Championship remains unchanged from December's original calendar and the All-Ireland final has been fixed for the weekend of the 21st and 22nd of August, with the GAA admitting it's unclear if supporters will be able to attend games later in the summer.

The Association are also to seek clarity from the government in the coming days as to whether teams will be able to play challenge games in advance of the commencement of the National Leagues.

Director of Player, Club, and Games Administration, Feargal McGill, told a virtual press conference this afternoon that the Championship draws will take place later this month and more information on the league fixtures will be available in the next ten days.

Club championships are due to get underway in September with McGill adding that there's a commitment to completing last year's minor and under-20 Championships once the government give the green-light to resume those competitions.

The provincial club championships are due to run into 2022 with the All-Ireland Club finals likely to be staged next February. 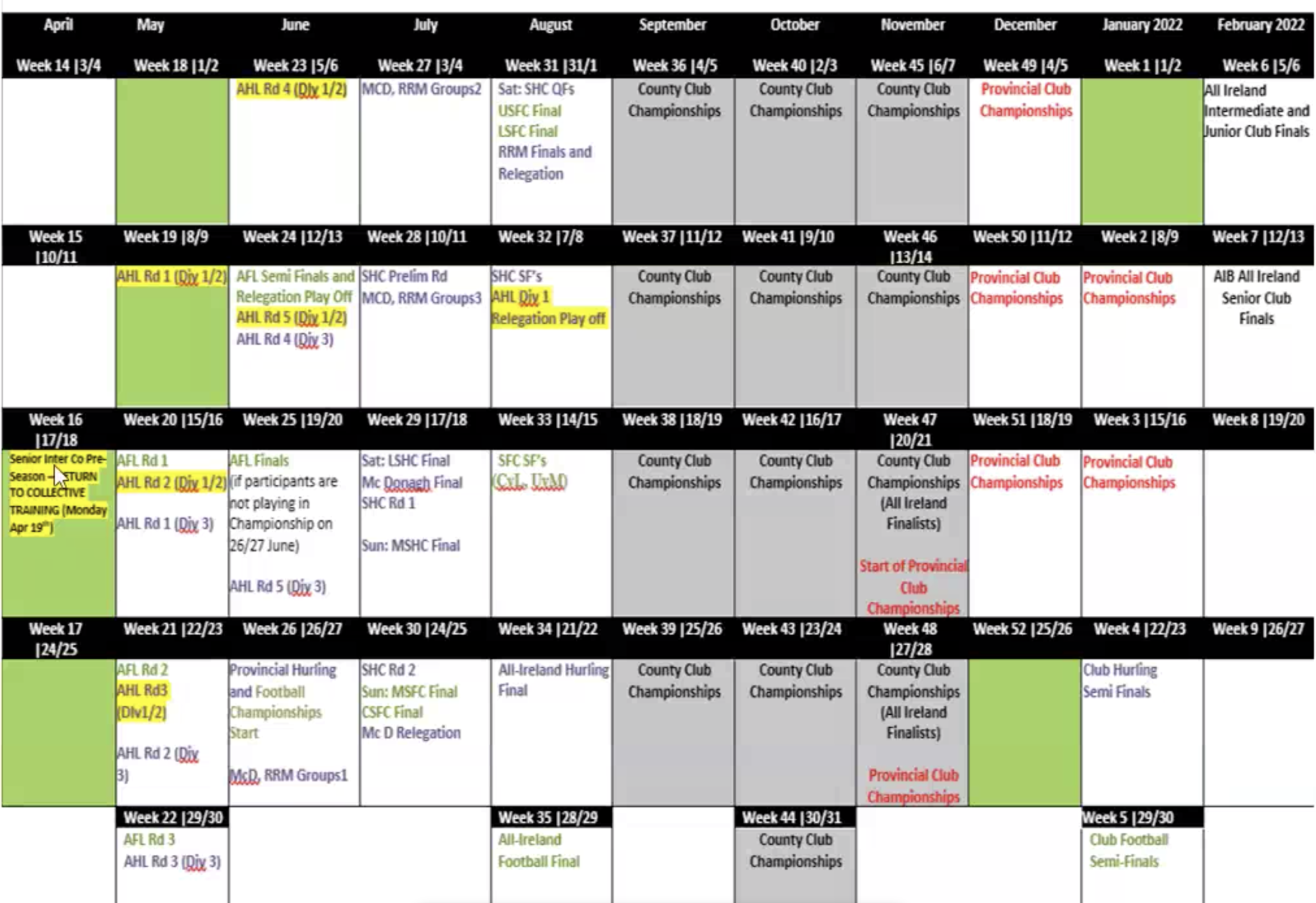 The Allianz Football League will from the weekend of May 15/16 to the weekend of June 19/20 with Divisions split into North and South as originally planned in December.

Four teams will be in each group based on geography with three Round Robin games per team. The top two in each divisional group will advance to the league semi-finals followed by a league final.

The bottom two in each divisional group will play relegation semi-finals with the two losers of those matches relegated. The bottom teams in Division 4 will play a Shield semi-final and final.

League finals will only be played on June 19/20 if counties involved are not playing in the championship the following weekend. If they are, then joint winners will be declared for Division 1 and joint winners and promotion for Divisions 2, 3, and 4.

London will not be participating in the 2021 Allianz Football League.

There will be no Division 1 Hurling League quarter-finals, semi-finals, or Final played. There will either be joint winners for 2021, or or if the teams that win Div 1A and Div 1B meet in the Championship, this will double as a League Final.

The Division 1 Hurling League Relegation Play-off will be played as curtain raiser to Senior Hurling Semi Final in August.

Divisions 2 and 3 will not have League Finals either. The top team in each Division will be crowned champions. The bottom team in Divisions 2A, 2B, and 3A will be relegated.

British based teams will not be involved in the Allianz Hurling Leagues this year. London and London and Warwickshire will start 2022 in Divisions 2B and 3A respectively; Lancashire in 3B.

The 2021 All-Ireland SFC will be played as a straight knock-out competition from the provincial series forward. There will be no Qualifiers and New York and London will not be involved.

There will be a provincial knock-out championship with back-door qualifiers like there was in 2020, but now also with the introduction of relegation to the Joe McDonagh Cup.

There will be a preliminary round in the qualifiers between the two defeated quarter-final team in Leinster with the winners progressing to Round 1 of the Qualifiers and the losers relegated to the Joe McDonagh Cup in 2022.

There will be no semi-finals in the Joe McDonagh Cup which is the only change from what was proposed in December.

The Joe McDonagh Cup winners are promoted in 2021 but do not have a back door into the Liam MacCarthy Cup.

The Joe McDonagh Cup will be played played on Saturday, July 17, the same day as the Leinster SHC Final, and will be broadcast live on TV.

The six competing teams will be split into two Round Robin groups with each team playing one home and one away match. The top team in each group will play the runner up in the other group in the semi-finals with the bottom team in each group playing a relegation final.

If Kerry win the 2021 Joe McDonagh Cup they will play in Leinster in 2022 and replace the team relegated from the Leinster Championship this year.

Two sides to the draw:

Group B - Two teams play in one fixture

Semi Finals: Top 2 teams from Group A are drawn to play against Winner of Group B and Winner of Quarter Final/Relegation play-off

Details will be finalised when there is clarity on a return to training/play date.

2021 Minor and U-20 Football and Hurling Championships

Details will be finalised when there is clarity on a return to training/play date.