Floyd Landis says cycling hasn't really changed since the days of his and Lance Armstrong's dopin...

Floyd Landis says cycling hasn't really changed since the days of his and Lance Armstrong's doping, as he painted a grim picture of the sport today.

The former cyclist, who won the Tour de France in 2006 before testing positive himself for performance-enhancing drugs, has a frosty relationship with renowned fellow doper Armstrong.

Landis joined Ger and Eoin on OTB AM to discuss the new 'LANCE' two-part documentary on ESPN, and he argued that cycling has reached a point where perhaps allowing doping could even be the solution.

"At the end of the day, what really bothers me is they nearly killed a couple of us. Not that we're innocent, but they went to that extreme.

"I don't know what the roles should be or how you tell us someone is contrite going forward, that's why every once in a while I come to the conclusion that... it might be best to just allow it [doping].

"If your goal is really to make it fair, which is another stupid philosophical conversation because that's not a thing anyway - but if that's your goal, to make it as fair as you can, right now given the tools you have and the situation, if you have two working brain cells you can only conclude that it has to be allowed, just let it happen."

The former U.S. Postal Service team member says coming up with another fairer solution would have happened by now if it were feasible.

"I would prefer to have a system that everyone believed was fair... sure people are going to try and chat and some might get away with it from time to time, but that's not what you have now.

"What you have now is a just thoroughly ridiculous situation where everyone knows that if the other guys want to do it they can probably get away with it which leaves you with an impossible choice.

"If there's a way to create a situation where people have relative confidence that they aren't competing against an entirely doped peloton, then I think everyone wants that. 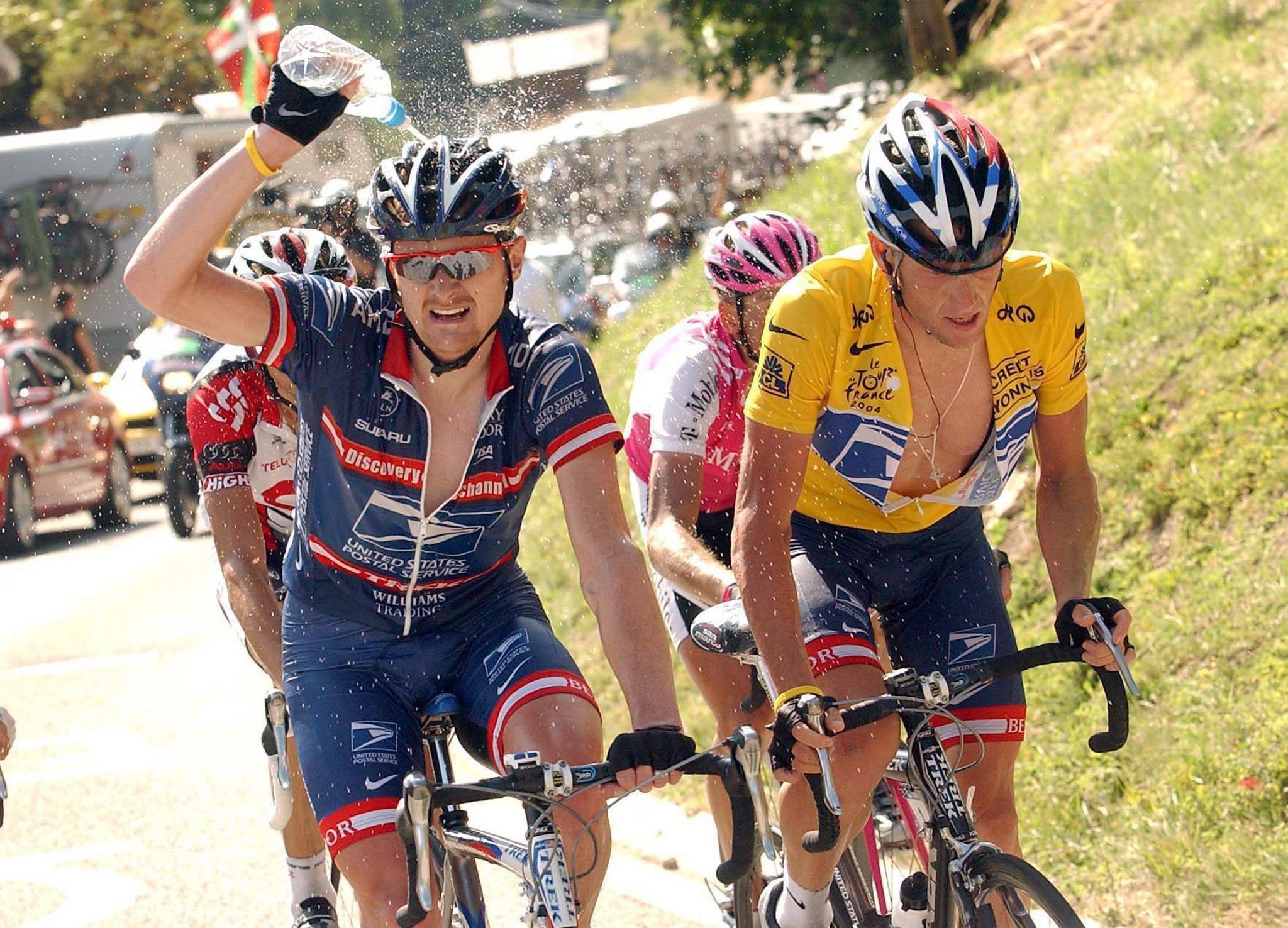 US Postal team rider Floyd Landis (L) from the US pours water over his head as he rides with his teammate and compatriot Lance Armstrong (R) during the 17th stage of the Tour de France cycling race, Thursday 22 July 2004 in Le Grand-Bornand. B |

"I haven't heard a solution that even sounds remotely workable. So, what do we do?

"Given unlimited resurces you could probably do enough testing and even create new tests and maybe keep up, but probably not, somebody would still probably figure a way around it.

"I don't think that's even close, even if you just look at WADA's spending on testing and research, it goes down every year while their budget goes up, it's bizarre."

On Lance the man, Landis says he's a complicated figure who is unwilling to change the person he has always been.

"He has a real story to tell, and it has probably got some good morals to it, but it's gotta come with a new Lance, right? And he doesn't want to do that. He wants to be his old obstinate self.

"You can respect that as a character in the story, he's the most defiant asshole on Earth. At this point we're all grown up, let's figure this out! He's an interesting guy."

LISTEN: Our Lance Armstrong podcast series - hear from those that were closest to him here.