Regan Buckley and Michael Nevin have secured the Irish team's first medals at the European Games in Minsk after winning their respective boxing quarter-final bouts.

Buckley (pictured above) was the first quarter-finalist into the ring and defeated Spain's Martin Molina Salvador with a 4-1 split decision in the men's light-flyweight division.

The Bray boxer revealed after the bout that he lost control of his opponent slightly in the middle round but recovered well.

"[In the] first round, I was controlling the distance very well," said Buckley. "I was catching him a lot on the counter. The second round, I may have got a bit too [involved] with him on the inside.

"Then the coaches told me in the third round to bring it back out to a boxing match. I was working off the jab in the last round and I was catching him with some nice shots. I think that's what got me the fight."

"I've two days until the next bout," Buckley added. "So it'll be straight into recovery and looking on to the next one. No time to dwell on it." 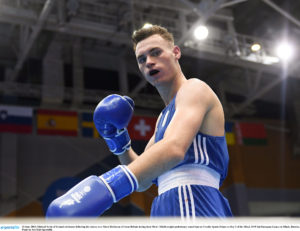 Nevin will take on Salvatore Cavallaro from Italy in his semi-final on Friday night but admits it wasn't easy beating his Turkish opponent to get there.

"It was a good fight. He was a good, strong opponent. That's me with a bronze medal now so I'm happy with that performance.

"A couple of days recovery now, that's three fights for me in three nights.

"On to the next one now, he's a big, strong opponent. I feel good. I feel good, I have a bronze medal now so I'll try to change the colour."

It was a good day as well for Roscommon woman Aoife O’Rourke who saw off the challenge of local middleweight Viktoryia Kebikova on a 4-1 split decision.

O'Rourke progresses to the quarter-finals tomorrow evening when she will face Great Britain's Lauren Price.

"I'm very happy to have the first one over with," said O'Rourke after the win. "It was a tough fight from the start but I expected that. All the girls in the weight are top class.

"I was expecting the cheering and all that, a lot louder from [Kebikova's] side but I was prepared for it so I was able to manage it.

"I think I was just trying my best to follow the instructions the coaches were giving me and the shots were landing."

Meanwhile, there was disappointment for Belfast native James McGivern lost his last-16 bout this lunchtime against European champion Hovhannes Bachkov of Armenia.