For 35 minutes, it looked like Mayo had a real chance of ending Dublin's Drive-For-Five.

But Dublin killed all hope in brutal fashion in the 12 minutes after half-time.

Kieran Donaghy had a bird's eye view of that Dublin match-winning salvo.

"I was right behind it looking out from the corner of the Canal End," the Kerry legend told Off The Ball.

He and ex-Mayo and Armagh forward Billy Joe Padden joined us to review the weekend's two semi-finals.

Donaghy continued on Dublin: "It was so impressive, just how direct they were and how accurate it was. Everything was to hand and they're so strong taking you on up front.  The point-kicking by Paul Mannion and the goals by Con O'Callaghan. [Ciaran] Kilkenny going deep and getting on loads of ball again. Pressing up on the kick-out, boxing everything in and just keeping the onslaught coming basically.

"And obviously then [Brian] Fenton in the middle of the field running the whole show. It was a joy to watch his performance out there. He's a colossus really."

Donaghy also addressed ways in which Mayo could have stemmed the tide in those fateful minutes.

"Maybe going short and maybe looking to engineer a short kick-out and just get on the ball," he suggested.

"And maybe Rob Hennelly could come out a bit and play as the extra man back there for a second and just take the sting out of it and see if you can work your way up and get a score. I guess people talk about responding to goals or coming under the wave of attack. If you're a team and you can see the goal, there should almost be a set thing in your head as a unit that, 'OK, we've conceded a goal and we're going to knock this kick-out short. Let the goalie come out and play as an extra man for a second and pop the ball around. Take the sting out of it.'" 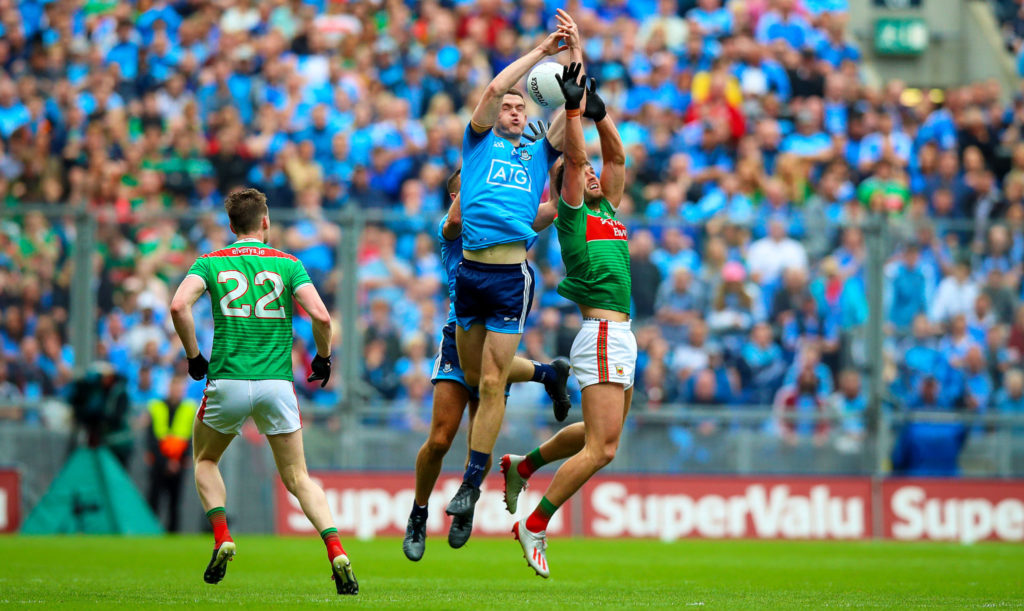 Instead it was "kick-out long after kick-out long" from Mayo according to Donaghy. Padden added that Mayo lost the first-half ability of holding onto possession, ceding momentum to Dublin.

"But you have to hand it to Dublin and their zonal system of pressure high up the field," he said.

Either way now though, Dublin advance to a final against Kerry after his county overcame Tyrone.

Like Dublin, Kerry also had to battle back to overcome Tyrone.

"They were a bit sloppy in the first half," said Donaghy of Kerry.

"They were hand-passing it to each other. It was bouncing twice before the guy got it. There were a few foot-passes that trickled along the ground. You can't be at that in an All-Ireland semi-final.

On the final, Padden feels it'll be "extremely difficult" for Kerry given Dublin's pace and incisiveness.

"At the same time, they can learn from some of the things Mayo did well," he said.

You can watch the full semi-final review on the video player above.