Cork and Waterford already up against it in Munster

The hurling championship has crashed into our psyche, and before we know it, Cork and Waterford could be crashing out.

Remember, it's all change with the round robin system, and in Munster and Leinster, three out of five teams will reach the All Ireland series and two teams will fall by the wayside.

The Rebels will go to the Gaelic Grounds to play All Ireland champions Limerick next Sunday off the back of a 2-28 to 1-24 defeat to Tipperary at Pairc Ui Chaoimh.  Cork conceded 2-24 from play as the Tipperary forwards caught fire.  Liam Sheedy had the midas touch in his first spell as Premier county manager and his charges have hit the ground running, displaying their best Championship form in three years.  John 'Bubbles' O'Dwyer is an exceptional hurler and he scored seven points from play, while also setting up John McGrath for the crucial match winning goal.  Cork will need to tighten up their defence and take the load away from Patrick Horgan if they are to avenge last year's All Ireland semi final defeat to the Shannonsiders.  A second successive defeat could end Cork's summer before it even begins. 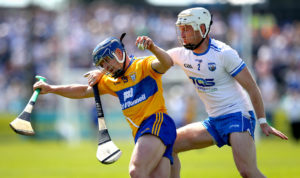 A fast start, some excellent play by Tony Kelly and a dangerous full forward line were the keys to Clare spoiling Waterford's return to Walsh Park in the Championship.  Shane O'Donnell made a notable return to the fray.  The Banner had to hold on tight at the end, but probably deserved the win over the balance of play on a scoreline of 1-20 to 22 points.  The Deise know how fickle the new structures can be; All Ireland finalists in 2017, their campaign was short last year.  They will have to regroup quickly before tackling Tipperary in Thurles next Sunday.  Clare are not back in action until June 2nd.