Here are five things we learned from game Week 5.

The north London derby between Arsenal and Tottenham Hotspur became a bit of a demolition derby as Arsenal thumped Spurs 6-1 at Meadow Park.

Vivianne Miedema cemented her place as one of the best strikers the WSL has seen when she became the league’s all-time top goalscorer.

Not one to settle, the Dutch forward not only broke the record but went onto score a hat-trick within the first half.

At only 24 years old, Miedema overtakes Nikita Parris as the all-time top goalscorer.

Arsenal’s boss Joe Montemurro said after the game that all contracts will be looked at in November. With one year left on her contract, Miedema’s will be top of the pile. 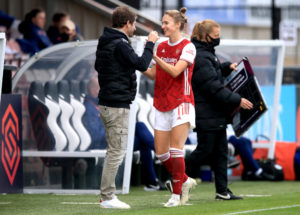 Ireland captain and Arsenal left-back Katie McCabe got Arsenal underway with the goals against Spurs on Sunday. It took just three minutes before Arsenal won a free-kick on the edge of the area. McCabe struck with her left-foot to fire a rocket across the goal and into the top corner in what was a contender for goal of the weekend.

BT pundit and former Arsenal player Rachel Yankey spoke before the game about how underrated McCabe is and pointed her out as the one to watch throughout the match.

The Irish star didn’t disappoint with an excellent overall performance which saw her register an assist for Miedema’s second goal.

The performance was almost marred, though, when Spurs were awarded a penalty for a high-foot against McCabe. However, on repeat, there looked to be no contact made. Arsenal goalkeeper Manuela Zinsberger saved from the spot.

McCabe’s form of late will excite Irish fans as the team heads into their crucial Euro qualification encounter against Ukraine this Friday.

It has taken a few weeks for the World Cup-winners to settle into their retrospective clubs. Well, last weekend saw the US signings register on the scoresheet.

Manchester City’s Sam Mewis has been one of the players to settle more quickly into the team. Mewis scored her second of the season to equalise in City’s 1-1 draw with Reading.

Unfortunately, their US teammate Alex Morgan is still yet to appear for Spurs after a set-back in training forced her out of the derby against Arsenal.

Spurs fans will be hoping the international break will be enough time for Morgan to regain her fitness.

It wasn’t a good weekend in the Oliver refereeing household last weekend. While Micheal Oliver was the man in the middle for the Jordon Pickford challenge on Virgil van Dijk, his wife took charge of another Everton game.

The Toffees dropped their first points of the season in a 2-2 draw against Brighton & Hove Albion, however, that could have been different had Brighton gone down to 10 players.

In a bizarre incident, with ten minutes remaining, Brighton forward Kayleigh Green looked to be booked twice but not sent off.

The FA Player has been an excellent way of making WSL matches available to watch for free, however, the standard of commentary needs improving.

On numerous occasions this season we have heard commentators make too many mistakes when it comes to players' names. Granted, mistakes can happen, but when it is to such an extent that has been the case then something needs to be done.

There was no greater example of this than the commentary for Miedema’s record-breaking goal during the north London derby on Sunday. As Miedema slotted away her 50th WSL goal, the commentator proceeded to call her by her teammate’s name, Lia Walti.

If Mo Salah was about to break a record would he be mistaken on commentary for Roberto Firmino?

The WSL takes a break for international action and will resume on November 8th.

As part of that international break, the Republic of Ireland will take on Ukraine in Kyiv on Friday evening, with kick-off due at 5pm, Irish time.

This is the biggest match in the history of the women’s national team and you can watch the action unfold on RTE.