Here are five things we learned from game week four.

Arsenal took on Brighton & Hove Albion away on Sunday with the Gunners' 5-0 victory taking them to the top of the table.

It was Vivianne Miedema who showed once again why she might be the greatest goalscorer the Women’s Super League has ever seen. The Dutch forward got herself on the scoresheet twice, bringing her tally in the league to an incredible 49 goals in just 49 games for Arsenal. This equals Nikita Parris’ record on the all-time goalscoring charts.

At only 24 years old, Miedema still has many more goals to come and she will be hoping to break that record in the north London derby this coming Sunday. 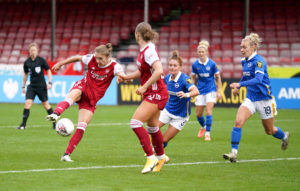 Sunday saw the meeting of last season’s league winners and runner-ups, which was set to be the stand-out fixture of the weekend when Manchester City headed to Kingsmeadow to take on the champions, Chelsea.

Both teams came close to breaking the deadlock in the first half-hour but it was a contentious penalty decision that brought the first goal. The penalty awarded in the 35th-minute for an apparent handball by Ellen White was slotted home by Maren Mjelde after a lot of arguing by the City players.

White was booked for the handball which, on replay, showed the ball hit off City defender Demi Stokes' elbow/side. Not only did the wrong player get a yellow card but it would seem it was not a handball at all, a decision which had BT pundit Karen Carney calling for the introduction of VAR to the women’s league.

Despite the penalty, Chelsea showed their dominance over a City team that at times struggle to put away chances. It was Fran Kirby, in the second half who caused all sorts of problems for City, setting up Sam Kerr with chance after chance and it proved to be third time lucky when Kerr tapped in a Kirby cross to make it 2-0.

City pulled a goal back through a penalty of their own when, once again, Chole Kelly scored from the spot. In form Kirby then bagged herself a goal to give Chelsea a 3-1 victory over their rivals.

Chelsea did not let up throughout the 90 minutes and dominated play by putting out a statement performance over a star-studded City side. 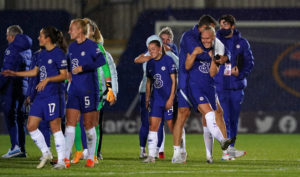 Tottenham Hotspur cannot seem to score at the moment. They took on Manchester United at home and while they caused certain problems, they could not convert their chances. Yet another game went by with no debut for star-signing, Alex Morgan. This match was crying out for someone with her goalscoring calibre. Not named on the bench but looking on from the stands, Morgan could be seen giving her team-mates some advice just before the second-half kicked off.

Having only given birth five months ago, it is understandable why the World Cup winner is not quite match fit yet. With her contract only until the end of the year, Spurs fans will be hoping to see her on the pitch soon and scoring goals.

It was goalkeeper Becky Spencer that Spurs fans had to thank for keeping the scoreline down to 1-0 after Millie Turner headed home for United to take the three points. 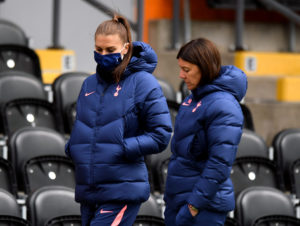 Everton kept their brilliant start to the season going with a 3-1 win over West Ham United. That victory brought them to four wins from four games and puts them joined at top of the table alongside Arsenal.

West Ham would have hoped they could challenge the Merseyside team but Willie Kirk’s side are playing full of confidence and will punish anyone when given the chances.

The win keeps Everton’s 100% start to the season going, something Kirk will be delighted with having joked before the game about neither of Everton’s men or women wanting to be the first to lose this season. 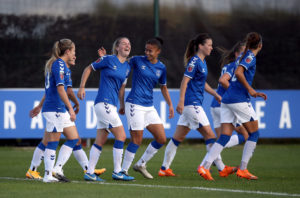 While there was lots of quality football on show over the weekend, the reality of the world’s current situation was also on show. The weekend saw the first postponement of a game in the league so far this season due to COVID-19 concerning the clash between Bristol City and Aston Villa. The game was called off after an Aston Villa first-team squad member tested positive for the virus.

A number of Villa players are now self-isolating, resulting in their fixture with Chelsea also being postponed.

The rest of the league’s action will continue on Sunday with matches streaming on the FA Player. BT Sports will broadcast the north London derby between Arsenal and Tottenham Hotspur on Sunday, October 18th at 2.30pm.