The WSL is two weeks in and with some big-name signings still to make their debuts, the season is...

The WSL is two weeks in and with some big-name signings still to make their debuts, the season is sure to hot up. Last weekend saw plenty of goals and goalscorers.

With 31 goals scored across the women’s super league, here are five takeaways from the weekend’s action.

Chelsea bagged nine goals against Bristol City last weekend. With nine different goalscorers, it shows the Blues can get goals from all over the pitch.

Maren Mjelde gave the home side the lead from the penalty spot after Ji So-Yun was fouled by Yana Daniels.

Amongst the goal scorers, was England international, Fran Kirby. It was Kirby’s first goal in 16 months having missed most of last season after being diagnosed with a rare condition called pericarditis; an illness that causes inflammation to the fluid-filled sac around the heart.

Record-signing Pernille Harder also got her first goal for the club with a lovely backheel finish. Coming on in the 60th minute, Harder showed her class immediately by setting up fellow new signing Niamh Charles for her first Chelsa goal. 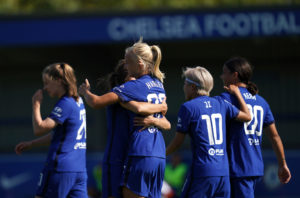 Chelsea was not the only team to score nine in gameweek two. Arsenal followed up their six on the opening day with a 9-1 defeat of West Ham United at the weekend.

With Chelsea, Manchester City and Manchester United all bringing in high-profile signings, it was a worry Arsenal would struggle to challenge. However, there is a long way to go in the season and the early signs are positive.

Arsenal may have signed smart rather than big ahead of this season, strengthening in defence with the signings of Steph Catley and Noelle Maritz. Going forward, they are as devastating as ever with Dutch duo Jill Roord and Vivianne Miedema already sharing 10 goals between them in the first two games of the season. Roord followed up her hat-trick on the opening day of the season, with another against West Ham, while Miedema got her second brace of the season.

Beth Mead, Leah Williamson, Caitlin Foord and captain Kim Little were also on the scoresheet for the Gunners, while Kenza Dali struck beautifully from the edge of the area for West Ham to make it 2-1. 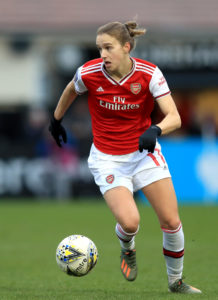 Manchester United fans will be waiting patiently to get a glimpse of USA star signings Tobin Heath and Christen Press, both are yet to join up with the team due to quarantine protocols.

Casey Stoney’s side showed they can put the goals away without the World Cup-winning forwards.

United put five past a decent Birmingham City team on Sunday, proving they are serious challengers for the top three this coming season.

Finishing fourth in last season's WSL, the Reds will hope Heath and Press can give them the edge to challenge for that newly assigned third Champions League spot. 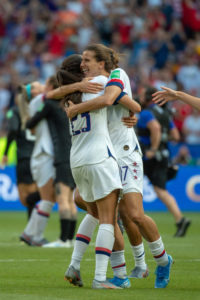 With 31 goals in the league last weekend, one could be forgiven for thinking Manchester City accounted for a large amount of those. City’s three closest rivals notched 23 between them. But it was not to be with a 0-0 draw at home to Brighton & Hove Albion.

City made lots of exciting signings during the transfer window but they seem to be lacking something going forward. Although winning their opening match 2-0 away to Aston Villa, they missed a huge amount of opportunities. Against Brighton at the weekend, they failed to score.

Brighton goalkeeper Megan Walsh was probably the player of the match so there were plenty of goal scoring chances, with Ellen White and Chloe Kelly having the best of them. City manager Gareth Taylor will be frustrated with his team’s finishing and decision making in the final third. 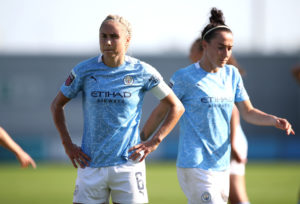 There is little doubt about the gulf in quality between the top four teams and the rest of the league.

It is clear to see the difference investment makes with teams like Chelsea, Arsenal, Manchester United and Manchester City showing they are a class above the rest.

Everton and Tottenham Hotspur will be hoping they can try to reduce that gap. Everton are showing good signs of progression under manager Willie Kirk. While Spurs have made clear they want to challenge with the signing of two-time World Cup and golden boot winner, Alex Morgan.

With the increasing popularity of the WSL, it is vital this investment continues and that clubs back their women’s teams. The relegation of Liverpool to the Women’s Championship last season highlights how important that is.

WSL action returns on October 4th after the international break with the continuation of last season’s FA Cup fixtures.