There were bizarre scenes on the Faroe Islands, as Slovan Bratislava failed to show up for their ...

There were bizarre scenes on the Faroe Islands, as Slovan Bratislava failed to show up for their UEFA Champions League qualifier with KI Klaksvik.

Originally scheduled for Wednesday evening, the game was postponed for 48-hours after Slovan's physio tested positive for COVID-19.

This led to the entire Slovakian champion squad being quarantined by Faroe Island authorities.

And as Friday's 5pm kick-off approached, there was no sign of the visitors.

Positive COVID-19 tests, and the inability to field a team has already worked in Linfield's favour in the competition.

The Danske Bank Premiership champions progressed from the preliminary round after their Kosovar opponents KF Drita were unable to enter Switzerland for their tie.

But their rules add, "If at least 13 players registered on the A list (including at least one goalkeeper) are available, the match must go ahead on the scheduled date."

As of midday today, Slovan said they were working to resolve the situation.

They even went so far as to dispatch a second squad for the Faroes to fulfil the fixture. However, a member of that squad then tested positive for COVID-19

What was looming was a similar situation as met Scotland in October of 1996. Following a row over kick-off time, their Estonian hosts failed to show for their World Cup qualifier. 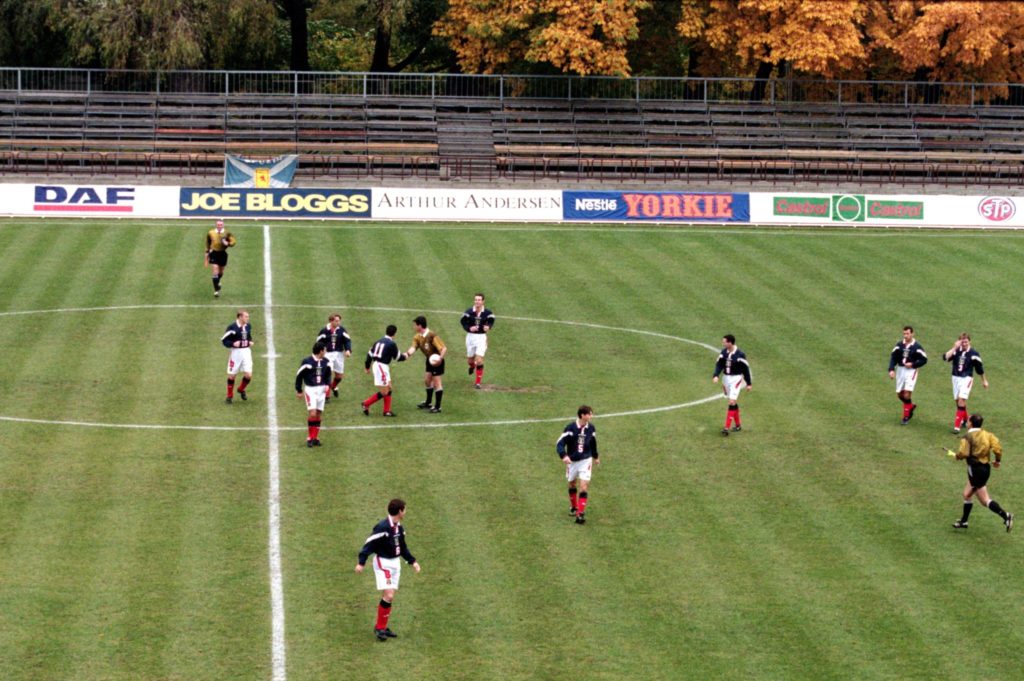 John Collins, Scotland shakes hands with the referee after Scotland's match against Estonia was cancelled

Scotland kicked off the 'game' in farcical scenes, before trudging back to their dressing room.

The game was played four-months later in the neutral venue of Monaco and ended in a 0-0 draw.

In a similar vein, Klaksvik players warmed up in preparation for a game - it was becoming clearer - wouldn't happen.

The live stream of the game even managed to bag a pre-match interview with bewildered Klaksvik midfielder Jakup Andreasen. In full kit.

The game was officially cancelled by UEFA, but they are yet to decide the final outcome.

Slovan claim, "You can see that Slovan had enough players who arrived with the second expedition and tested negative for COVID-19".

Time isn't necessarily on anyone's side. Swiss champions Young Boys await in a second qualifying round tie on Wednesday.

FAI say they have encouraged all players to receive COVID vaccine