Monaco manager Thierry Henry has been temporarily suspended by the club, with a decision on his future with the club still yet to be decided.

"AS Monaco announces that it has decided to suspend first-team coach Thierry Henry," the club said in a statement on Thursday evening.

"Franck Passi will train the first team this Friday."

The move comes after a run of dismal results, with the side second bottom in Ligue 1 having earned just 15 points from 21 games.

Henry's side were beaten 3-1 by Metz in the French Cup round of 32 over the weekend haven't picked up a league win since the start of December. With only two wins in their last 20 league games, the Monaco board have chosen now to act. 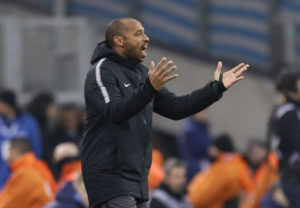 Thierry Henry may be on his way out of the club.

Off The Ball this week spoke to French football expert, Lauren Juliens, who explained how things have gone wrong for Henry at club where he honed his craft.

"The heart of the problem for me is that he thinks he is above other people," he said.

"He still behaves like he is either a player or a pundit, but not really like a manager.

"For me, what he said to Kenny Lala is what you can say from one player to another in the heat of a game [...] but not when you are a manager, that doesn't work anymore.

"He has to change his attitude, the way he behaves, his body language is wrong.

"Sometimes he looks like he's one of the boys. Until he changes to manager mode, I think he's unclear as to where he's going!"

You can catch that full interview below.

Arsenal hit back at Saint Etienne with Saliba statement

Lyon president believes it's "not too late" to finish French season