After a weekend where Rangers recorded their first defeat of Celtic away from home in nine-years, Pat Nevin singled out manager Steven Gerrard for praise after the Liverpool legend delivered an impressive tactical performance.

A matter of weeks after being denied his first trophy in management by Neil Lennon's Celtic, the possibility of even greater success opened up for Steven Gerrard as his Rangers side recorded a long-awaited win at Celtic Park.

The dominant side in a Scottish League Cup final that ultimately went in Celtic's favour earlier this month, Rangers saw out a 2-1 win on Sunday that will give neutral fans hope that Scotland is set to witness two teams battling it out for the title in 2020.

Sitting two-points shy of Celtic who remain atop the Scottish Premiership table, Rangers, who have one game in hand on their Glasgow rivals, owe much of this latest success to Steven Gerrard, according to former Scotland international Pat Nevin.

"The one thing that I took out of the game more than anything else was Steven Gerrard," admitted Nevin to Off the Ball, "he's got it technically.

"His tactics were actually pretty special and he did quite a few things in the game that I was so impressed with that were very different and very modern."

I just wonder about this new group coming through, they've learned from looking at Klopp, Pep - they've not learned from, dare I say it, Jose Mourinho 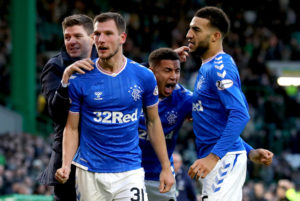 Furthermore, after a complicated few years for the blue half of Glasgow, Gerrard will undoubtedly be keen to stand in the way of Celtic as they chase a ninth title win in succession.

Although Pat Nevin remains confident that Celtic are better equipped than Rangers to win the Scottish Premiership this season, he has been impressed with Steven Gerrard and the lessons he has taken from his managerial peers.

"His adaptability is exceptional," explained Nevin. "His bravery, and that is something you see from him and these other young managers coming through, they are utterly fearless.

"It is the weirdest thing because they are different from others who are set in their ways.

"I just wonder about this new group coming through, they've learned from looking at Klopp, Pep - they've not learned from, dare I say it, Jose Mourinho.

Celtic's new kits for the 2020-21 season have been leaked