Was Steve Staunton really that awful as Ireland manager?

Okay. Let's cut to the chase here. No, Steve Staunton was not great as the Ireland manager, to put it kindly. However, there was intangible optimism when the Dundalk defender's name was announced as Brian Kerr's successor in January 2006.

After all, Jürgen Klinsmann, with no managerial experience to his name, took over from Rudi Völler as the Germany boss following a disastrous Euro 2004 campaign for the international giants. The Tottenham Hotspur legend revitalised the national setup, promoting youth to replace an ageing generation of national stalwarts.

And, after initial teething problems, it worked. Germany came third in the 2006 World Cup, losing a semi-final thriller against eventual champions Italy after extra-time.

There was an inkling of logic in taking a massive punt on Staunton, then.

This was Steve Staunton. Capped 102 times by the Republic of Ireland. The first player to reach a century of caps in the green shirt and the only man to have played in all 13 of Ireland's World Cup matches to date, ranging from 1990 to 2002.

This was Steven Staunton. The versatile and classy defender, league and FA Cup winner with Liverpool and two-time league cup champion with Aston Villa. 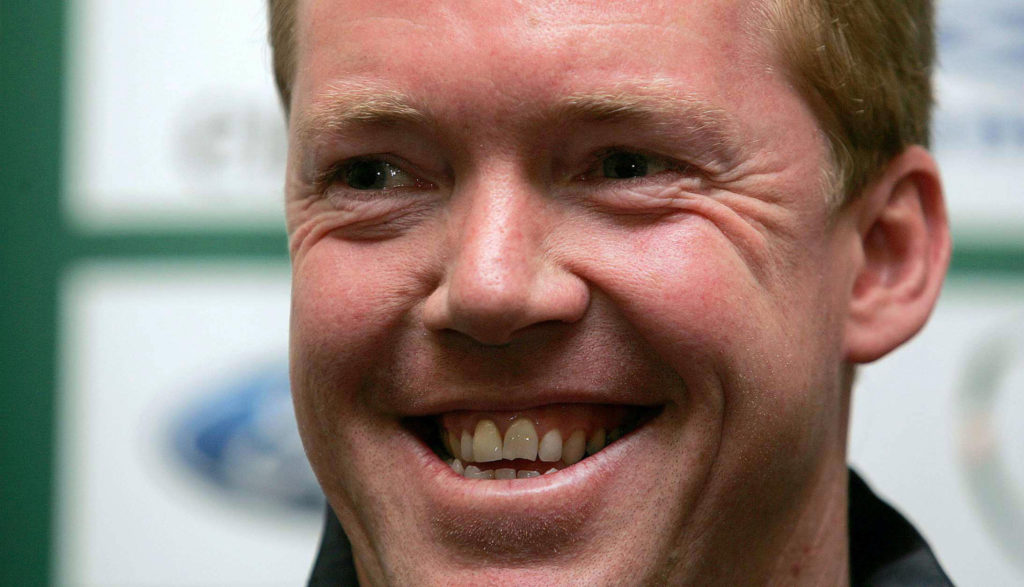 Republic of Ireland manager Steve Staunton during a press conference at the Danube Hotel, Bratislava, Slovakia.

When the FAI headhunted Staunton from Walsall - where he was acting as player/coach under manager Paul Merson - the public was caught off-guard. What happened to the Bobby Robson rumours or the Terry Venables hearsay? Even Alex Ferguson was linked to the post at one point.

The FAI had promised a "world-class" management setup to lead Ireland into the upcoming European Championships. What the country got was a completely untested manager, appointed a week shy of his 37th birthday who would be backed by the ailing Bobby Robson and assisted by Kevin MacDonald and Alan Kelly.

Nevertheless, it felt refreshing if not something a little different at the time. Robson was a touchline legend and would guide an on-pitch icon to dugout success. That was the outside hope.

It was an exciting period to be an Irish fan. This would rejuvenate the international setup following the meek climax of Kerr's tenure three months prior.

Then the unveiling press conference occurred.

We all know the quote now. It's as ingrained into Irish football fans' psyche as Thierry Henry's handball. Perhaps less remembered is Staunton's insistence that he would use one of the greatest managers football has ever known in "whatever role I see fit."

It was a landmark moment in Staunton's tenure, bookmarked for eternal preservation. Nostalgia tells you that it was all over before it began for the Louth man.

However, Ireland started well under their new gaffer, beating a strong Sweden side 3-0 in a friendly at the old Lansdowne Road. Each goal was significant. Damien Duff's strike was the Chelsea winger's first Irish goal in two years.

The second finished smartly by Robbie Keane, with the Tallaght native captaining his country on the night for the very first time. While the third, the unquestionable pick of the bunch, was scored by the late Liam Miller. It would be the Corkman's only goal for Ireland.

On reflection, Staunton's reign should have ended right there, where it all started.

Ireland would lose their next four matches. The initial two in this sequence were friendlies, both in Dublin; a 1-0 reverse to Chile and a 4-0 drubbing against the Netherlands. The latter, Ireland's heaviest home defeat in 40 years.

Staunton had a relaxing schedule to start with following Ireland's failure to qualify for that summer's World Cup.

Come September, it was down to business in Group D of the 2008 European Championship qualifiers. 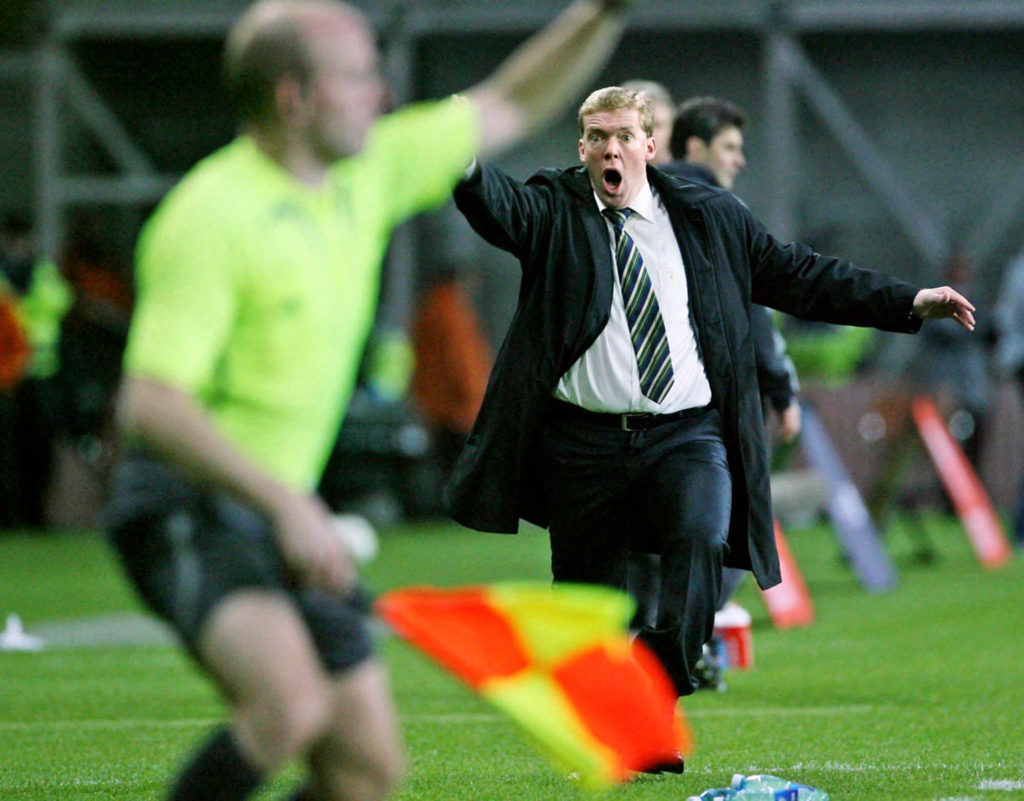 Ireland started with Germany away; their most difficult fixture on paper in a group also containing the Czech Republic, Slovakia, Wales, Cyprus and San Marino.

The hosts came out on top courtesy of a Lukas Podolski goal-to-nil in what was new manager Joachim Löw's first competitive game in charge of the Germans.

Staunton kicked a water bottle in anger during the game and was sent to the stands, where he watched from in the next match - the 5-2 humiliation in Nicosia against Cyprus.

It already felt like the end and it was only autumn.

The tides were turning and any conceivable honeymoon period was rapidly dissipating.

When the talented Czech Republic visited the capital in October, the pressure was on. Kevin Kilbane, a mainstay in midfield during the Staunton era, gave the hosts a most welcome lead with a beautiful left-footed finish.

Paul McShane debuted that night at Lansdowne, winning man of the match in a superb display, comfortably his best in a green shirt. Despite McShane's heroics, he couldn't prevent the fearsome Borussia Dortmund striker Jan Koller from spinning in the box and finding the far corner. 1-1. Not bad, though.

Ireland had earned their first point of the campaign against an excellent team and followed it up with a convincing 5-0 demolition of San Marino in the last game ever to be played at the old Lansdowne Road. Robbie Keane netted a hat-trick and Staunton breathed a proud sigh of relief to see 2006 out with a brief reprieve.

Staunton couldn't be accused of tactical conservatism, certainly when compared to the more risk-aversion approach of his predecessor. It was always two up top, with a pair of wingers and an attacking midfielder in support.

But there was a crucial absence of any discernable cohesion or genuine strategy.

The problem was it went too far the other way. It was chaotic, with players often questioning the management team's plan amongst themselves at the back of the bus, as Stephen Hunt pointed out when asked in the Off The Ball studio.

Hunt, by now a Premier League regular with Reading, finally made his senior debut in the reverse match away to San Marino. It was the first game of 2007 and one of the low points in Irish football history.

It was definitely the worst match of all-time that Ireland have won.

Only thanks to a last-minute Stephen Ireland tap-in were San Marino denied their first-ever competitive point. Minutes earlier they had levelled the match due to a calamitous defensive mishap between Wayne Henderson, Richard Dunne and McShane.

Afterwards Staunton cited the three points won as the only relevant information but the aforementioned defensive disaster proved symbolic of the manager's reign. This Irish football team were out of control and not in a punk, anarchy-driven sort of way.

Despite widespread calls for his dismissal, Staunton stayed and oversaw consecutive 1-0 victories at Croke Park - the first two football matches played there - against Wales and Slovakia.

They were good results. Wales were of similar ability and Slovakia were dangerous opponents, but respective Stephen Ireland and Kevin Doyle goals made it nine from an available nine at the start of the year. 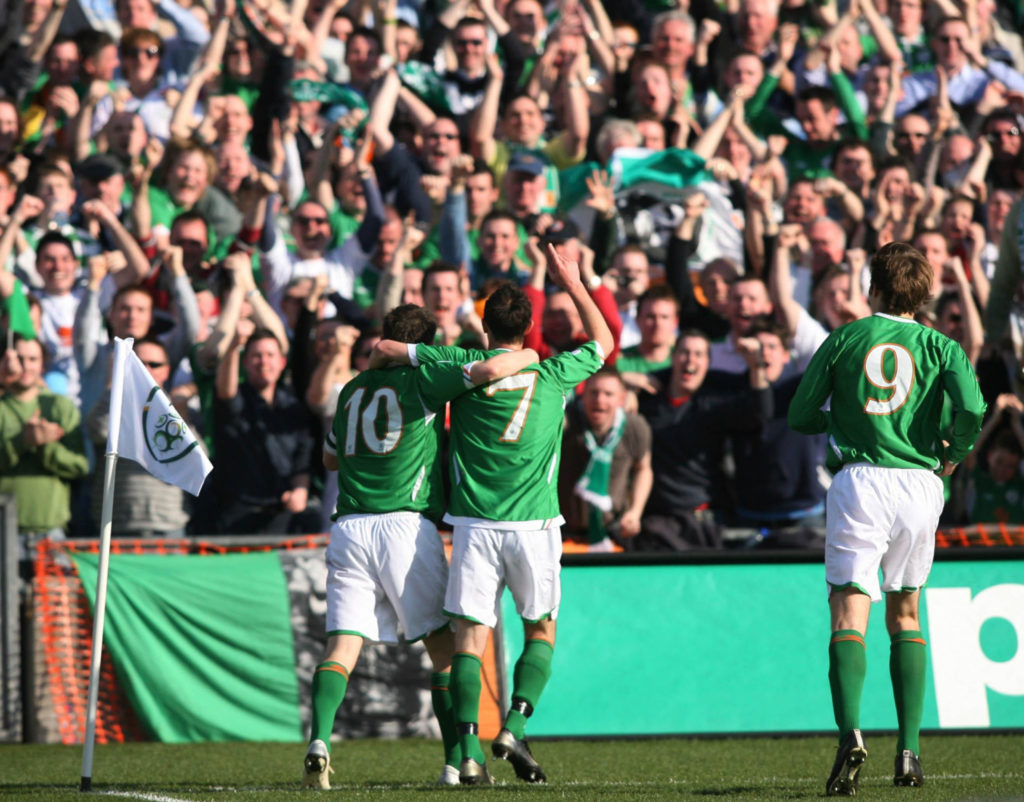 Republic of Ireland's Stephen Ireland and Robbie Keane celebrate the goal with the Irish supporters during the UEFA European Championsip Qualifying match at Croke Park, Dublin.

Friendly internationals followed that summer where Ireland went unbeaten in all three encounters, including decent 1-1 draws with Bolivia and Ecuador in the United States and a fabulous 4-0 victory in Aarhus against Denmark where Robbie Keane and Shane Long grabbed a brace each.

It was arguably the high point in Staunton's time as manager.

Then, the Stephen Ireland saga happened.

Loss of a star

It's hard to believe that the last game Stephen Ireland played for his country was on September 8th, 2007. But the prodigiously gifted midfielder has never surpassed his six senior appearances for the Republic of Ireland.

His final game resulted in yet another goal - four in six matches - the first of four goals in a disappointing 2-2 draw away to Slovakia. It was a devastating result as realistic qualification hopes were dashed following Slovakia's late, late leveller.

Worse was to come before the next game fours days later against the Czechs. Stephen Ireland had left the camp, the reason(s) is history and the truth only recently revealed. The point is, the man from Cobh never returned. 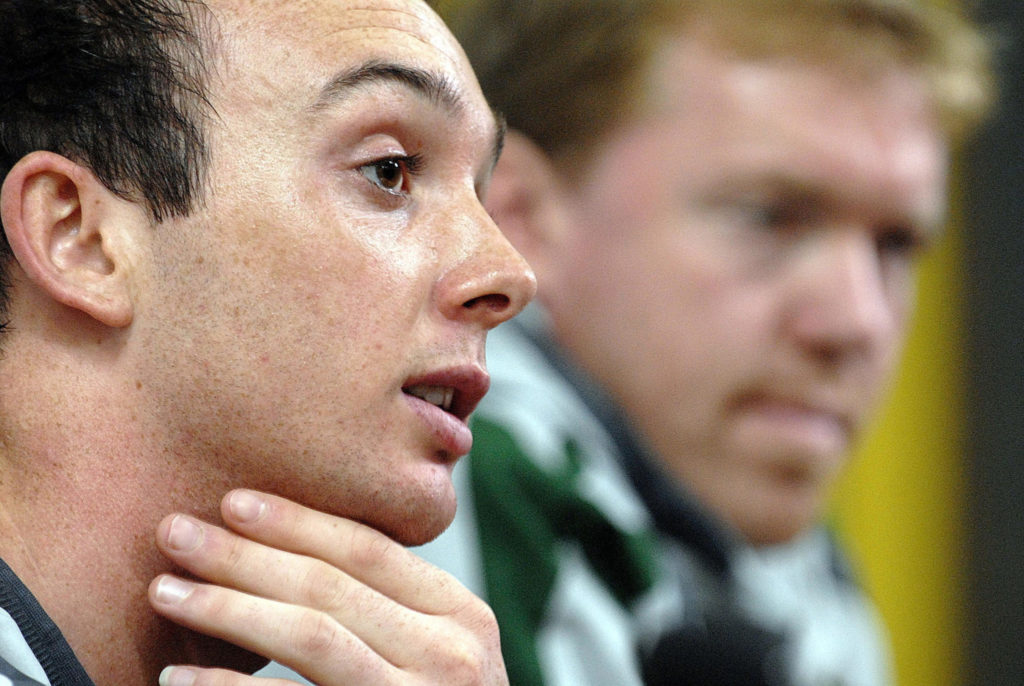 In his absence, Staunton's side would lose 1-0 in Prague, with Stephen Hunt sent off after coming on. Ireland wouldn't win again until a new permanent manager was hired.

A decent 0-0 draw at home to Germany followed. A more than reasonable result considering Germany would go on to reach the Euro 2008 final, losing only by the odd goal to a Spanish team considered one of the finest international sides in history.

But the damage was done and the goodwill gone.

Here's the thing with Staunton's reign as Ireland manager: When you place all the emotion aside and solely analyse the results from his 17-game, 21-month tenure, the reading is not exceptionally poor. It's just, Staunton's lows were lower than most. And the nadir was just around the corner.

Ireland hosted Cyprus in Croke Park on October 17th, 2007. It was an ugly night. Hopes of progression had evaporated but the home crowd's expectation remained. Even though Ireland didn't lose, it felt worse than the 5-2 ignominy in Nicosia.

Cyprus dominated their hosts and deservedly went ahead late in the game. The thousands in attendance were baying for blood. No player was safe. Robbie Keane was subject to a torrent of abuse from the stands but the harshest criticism was reserved for the boss. 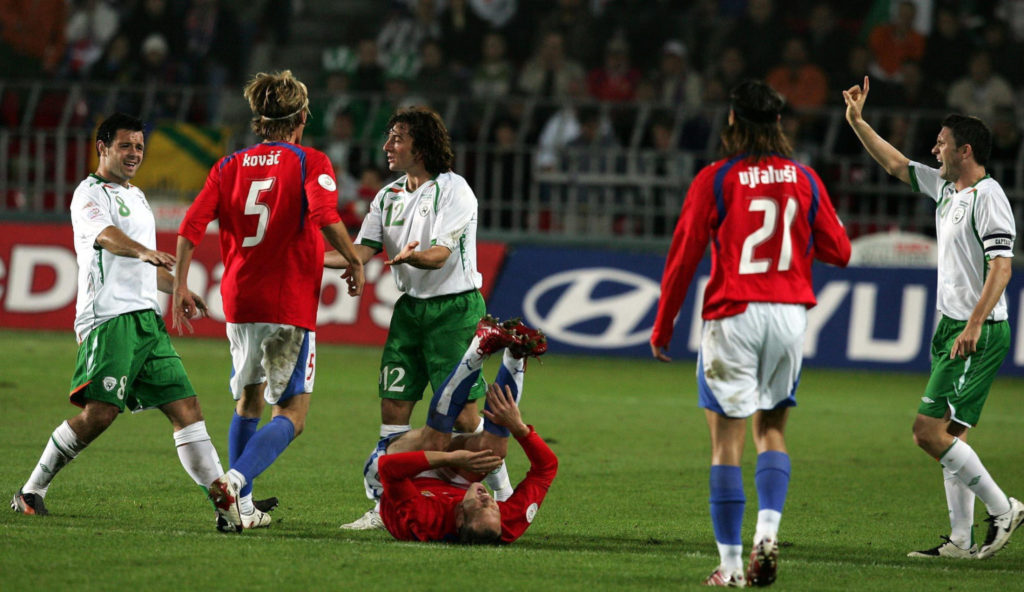 Republic of Ireland's Stephen Hunt (centre) reacts before being sent off during the UEFA European Championship Qualifying match at the Sparta Prague Stadium, Prague, Czech Republic.

Steve Finnan's equaliser - his only competitive Irish goal - is possibly Ireland's most forgotten. The shambolic performance outdid any result on offer.

Staunton was left to face the media.

Within a week, it was all over for Stan. Don Givens took charge of Ireland's final dead-rubber group game, a 2-2 draw away to Wales, before Giovanna Trapattoni was installed, two years after the FAI's plan to hire a "world-class" manager and supporting crew.

And that was it.

Staunton would be without management work until being appointed the Darlington boss in the 2009/10 season. He failed to see the campaign out. That followed a similarly brief stint as assistant manager at Leeds United under Gary McAllister.

After the Darlington job, Staunton took up short-term scouting positions at Middlesbrough and Sunderland but has largely been left in the shadows since that fateful autumn night in Drumcondra 12 years ago.

Above all the public utterings of nonsense and bluster, the most notable remnants of Staunton's reign is that he can boast no landmark moments of positivity.

Every other Ireland manager in the last 30 years has had something to shout about. Jack Charlton took Ireland to their first three major championships. Mick McCarthy brought Ireland to the World Cup in 2002.

Trapattoni qualified for Euro 2012 and had the mother of all near-misses in the playoff against France in November 2009.

Martin O'Neill had the joy of Euro 2016 and entered the second leg of the playoff for the 2018 World Cup at the Aviva against Denmark tied scoreless from the first leg.

Brian Kerr was beaten only once in qualifying for the 2006 World Cup and had a 55 per cent win ratio; the highest of all the managers mentioned.

What does Stan have to show for his time as Ireland manager?

Or, how awful was Steve Staunton as Ireland manager? The debate seems settled but maybe it wasn't as bad as it looked. Maybe.

Delaney: 'My comments weren't meant negatively. I respect people that use their strengths'