OPINION: Manchester United squad not good enough to win the title, with or without Solskjaer

OPINION: Manchester United squad not good enough to win the title, with or without Solskjaer

Manchester United lost to Leicester City 4-2 in the Premier League, leading to further questions about the competence of Ole Gunnar Solskjaer.

Ole Gunnar Solskjaer is a Manchester United legend and fan favourite. What he did as a player earned him the respect of the fans and is the reason he got the job. It's also often incubated him from media criticism because it's difficult for his former teammates to offer harsh criticism against him.

Solskjaer is very likeable and has an incredible resume as a player. He's going to get every benefit of the doubt from other players.

But even Gary Neville got close to blaming Solskjaer this weekend.

"The performances are nowhere near good enough," Neville said.

"There's been some good results, there's been some great goals. But the overall performances from the units in and out of possession are shoddy... When you play against a team that's got organisation to them and a methodology, you're going to get pulled apart. And that's what's happening."

Neville didn't openly say it, but he implied that Solskjaer got outcoached. He implied that Brendan Rodgers not only got the better of Solskjaer, but that it's something that has happened regularly this season against other managers.

United are a bad team right now. Their last 19 games have produced eight wins and one clean sheet.

If Solskjaer is to be consistent to the pattern of his career as United manager, he will somehow beat Liverpool next weekend and keep his job. That seems unlikely though. The questions around Solskjaer as a manager have lingered far too long for him to stay in charge regardless of next weekend's result.

The team is going nowhere with him.

But that's not the whole of this story.

Not to imply that any of them are lying or wrong, but it feels like this is a byproduct of Solskjaer outlasting his welcome. Our collective perception of the United squad is being pushed to an extreme because it subconsciously makes it easier for us to explain why Solskjaer needs to go.

Saying United would be third instead of fifth with a new manager is just not really the way our brains work anymore in the age of the internet.

"We've seen a team that's been picked today with Greenwood, Sancho, Ronaldo, Pogba and Fernandes... I wouldn't want to be a defender in that team.

"There's a reason that Darren Fletcher, John O'Shea, Gary Neville and Nicky Butt got a game at Manchester United."

That's an astonishing thing to say.

For all of United's struggles, the saving grace is that they have talented attacking players. Exciting players who can rival anyone else in the league. But if those players are that talented and that good, them playing together shouldn't be a problem regardless of who the manager is.

Solskjaer holds some blame here undoubtedly, but only some of it.

His responsibility lies in his lack of effort to make changes and the lack of understanding to solve the problems that are overtly in front of him.

The team's formation rarely changes but their shape remains a constant question. United aren't like the other top teams where each player or position has a clearly defined role. 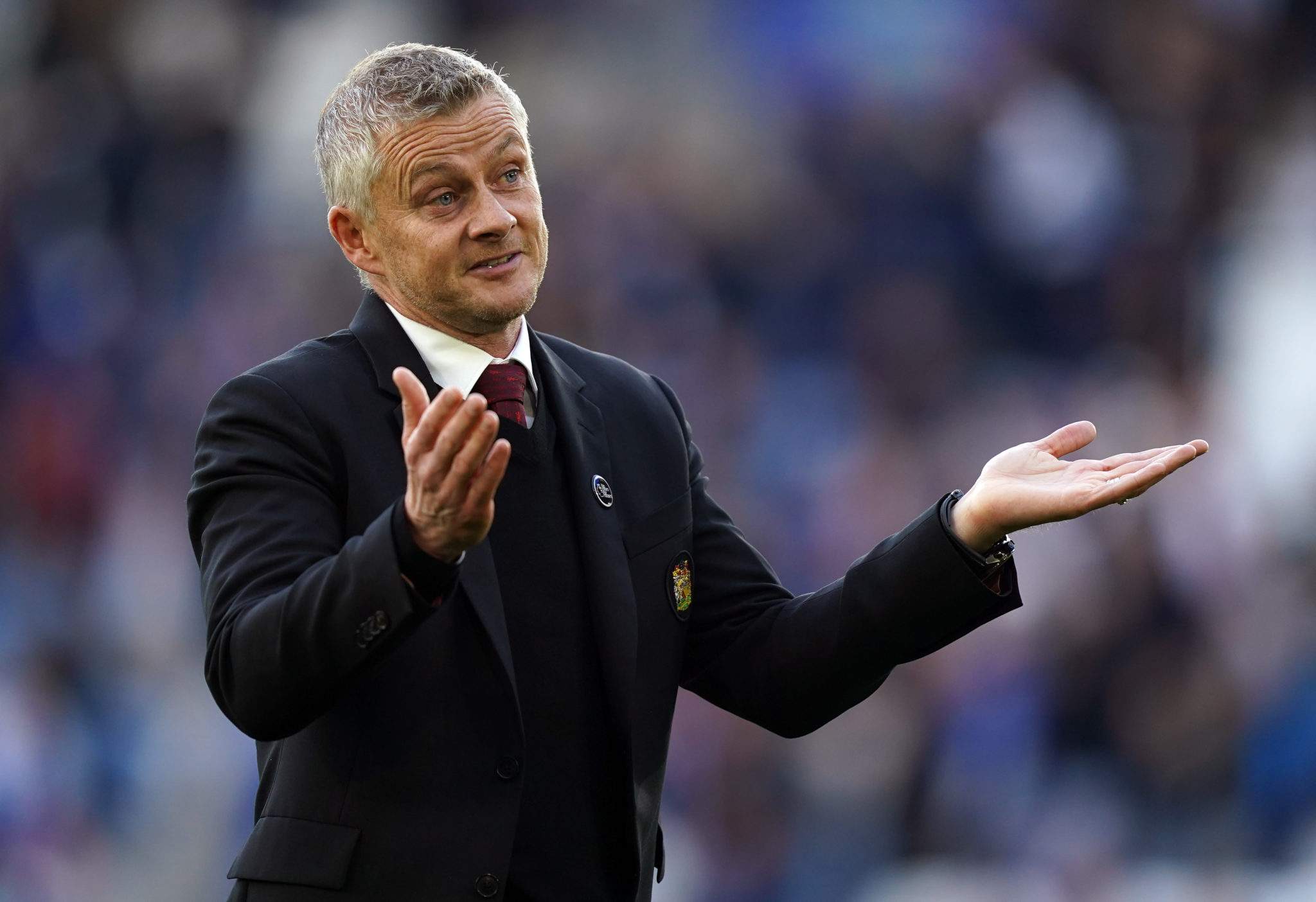 Paul Pogba is the prime example.

He's an easy scapegoat for analysts but has become a red herring that can be used as a crutch too.

A new manager might make him more effective in a specific role. But a new manager won't suddenly create an N'Golo Kante to play alongside him or a group of cohesive, congruent attackers to create a proper team in front of him.

Pogba often looks like he doesn't know what he's doing on the field and it's likely because his managers have often not known what to do with him.

He's far from blameless for United's failings but Neville didn't say Pogba creates an imbalance. He listed five players. And these are the players who are supposed to be the strength of this squad. The players who would presumably make United a title contender once Solskjaer was fired.

For them to be a title contender, they have to be at least on par with Liverpool, Manchester City and Chelsea.

Pep Guardiola started Kevin De Bruyne, Gabriel Jesus, Jack Grealish, Phil Foden and Bernardo Silva against Liverpool at Anfield. Guardiola is obviously a better manager but those players also don't come with a question about if they can all start together.

City have better defensive players and they have a good holding midfielder in Rodri. Even still, would Neville say that he wouldn't want to play behind those five players?

When Liverpool suffered injuries to their defenders last season, the front three still put shifts in to contribute with and without the ball. Whether it's Mohamed Salah, Diogo Jota, Robert Firmino or Sadio Mane, each of them carries their weight defensively. Salah is the only one of the group who can relax every so often but he offsets that with his quality and he hasn't done much relaxing this year.

The difference is that Liverpool's players are better.

And Chelsea's players are better.

Consider we're not even talking about the actual weak points of the United squad. They desperately need another central midfielder and they have by far the weakest set of defenders amongst the top four teams in the Premier League.

You can break down the flaws in United's greatest strength into three categories. 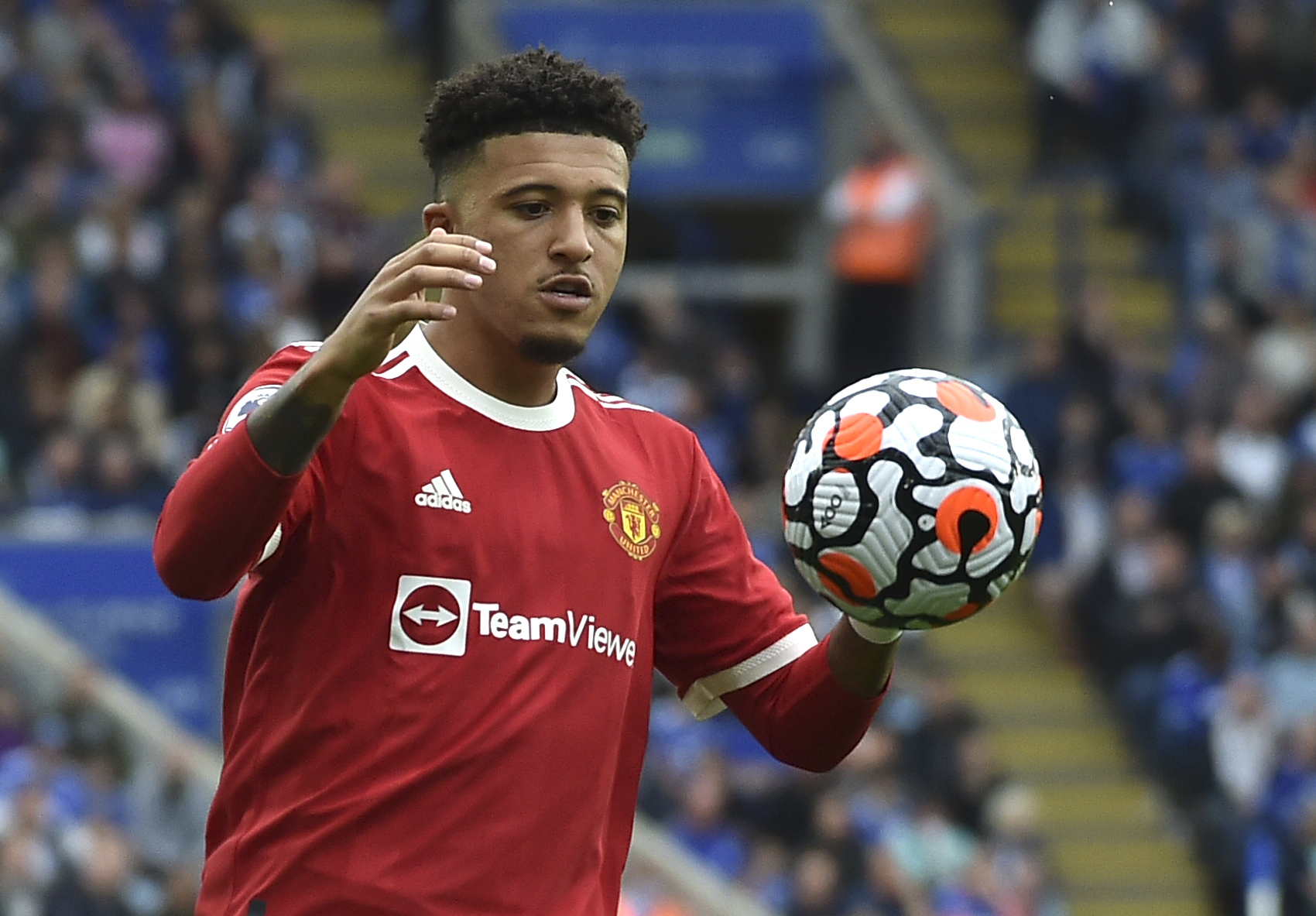 Jadon Sancho is a great talent who one day might become a great player. He's also English.

Too much is overlooked with Sancho because he's English. He joined United this year as a 21-year-old coming off a difficult Euros, joining a new team, moving to a new place and dealing with an injury. He has so many things working against him before you even remember that this is his first time playing Premier League football.

Sancho isn't viewed as a typical young, foreign import but that's exactly what he is. The only real advantage he has over a foreigner is that he speaks the language.

The price tag put Sancho in the Salah stratosphere. He is Salah, but he's Salah at Chelsea, not Salah at Liverpool. Salah at Chelsea was still developing, still figuring out football, the Premier League and himself at a young age. Just because Sancho cost €85 million doesn't mean he's an €85 million player right now.

He needs time to develop. Damien Delaney recently spoke about how Solskjaer is failing Sancho in terms of his individual development.

Getting Rashford back will mean United can avoid starting Sancho and Greenwood together like they did against Leicester. But they still don't have wingers comparable to Salah and Mane or the arsenal of options that City have.

Ideally, Sancho and Greenwood could start together but with Greenwood upfront rather than on the wing.

Greenwood is as talented as anyone. He's a good, effective player right now but he's also playing out of position to accommodate Ronaldo. He's a natural striker playing on the wing. For as talented as he is, he needs to develop in his own position to reach his prime and then he can be comparable to the best players in the world.

Right now it's a square peg in a round hole, even though he's so talented he can make it work.

Liverpool, City and Chelsea embrace their young players but don't ask too much of them. They insert inexperienced players into established teams. For example, when Harvey Elliott returns, Klopp won't start Elliott and Curtis Jones in midfield together. One of the two will start alongside Fabinho and Henderson with the established front three ahead of them.

They play in a structure and get guidance from all around. 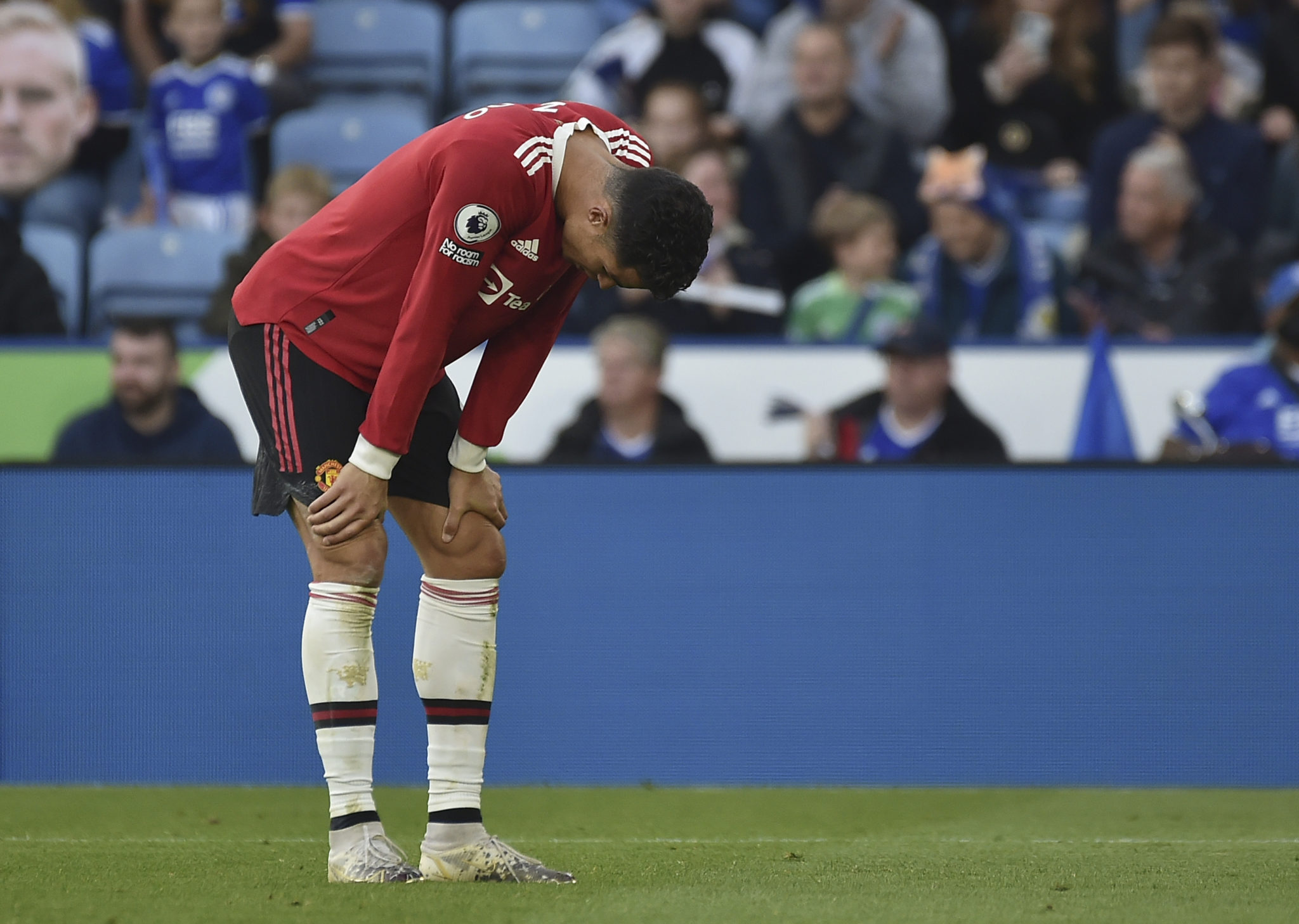 He plays for United the same way he plays for Portugal. Ronaldo stands up top and waits for his chances to come before inevitably taking them. There's huge value in that when you're playing inferior teams. Ronaldo will score a lot of goals when United dominate possession of the ball and don't have to work to get it back.

Good teams will force United to try and press them with 10 men though. It's not just that Ronaldo doesn't track back, it's that he preserves his energy for when United have the ball. He's never going to lead a press or consistently press high upfield for a full game. He might do in spurts but that's it.

His presence alone hinders what United can and can't do against different teams. That means they're not adaptable to different situations. It wouldn't be a major problem if it was easy to drop him or rotate him but he's such a presence that you can already see a reliance on him developing.

Players look for and to Ronaldo with the ball, making him the focal point of the team. When you have so many younger, less established players, you can understand how influential Ronaldo is on them.

Nobody is a liability in the City or Liverpool squads the way Ronaldo is. You can't press with him, you can't move him around the field to play different positions and you can't play him with other players in the squad for fear of being overrun.

Liverpool, City and Chelsea can all suffocate their opponents by pressing high upfield if they so choose. They can adapt to any opponent and change their shape to suit any situation. That is because they have athletic, well-rounded and consistent defenders with willing runners further afield.

United don't have that.

In fact, if we go through the whole United squad, how many players consistently contribute positively both with and without the ball. Luke Shaw, Bruno Fernandes and Raphael Varane. Those are the certainties. 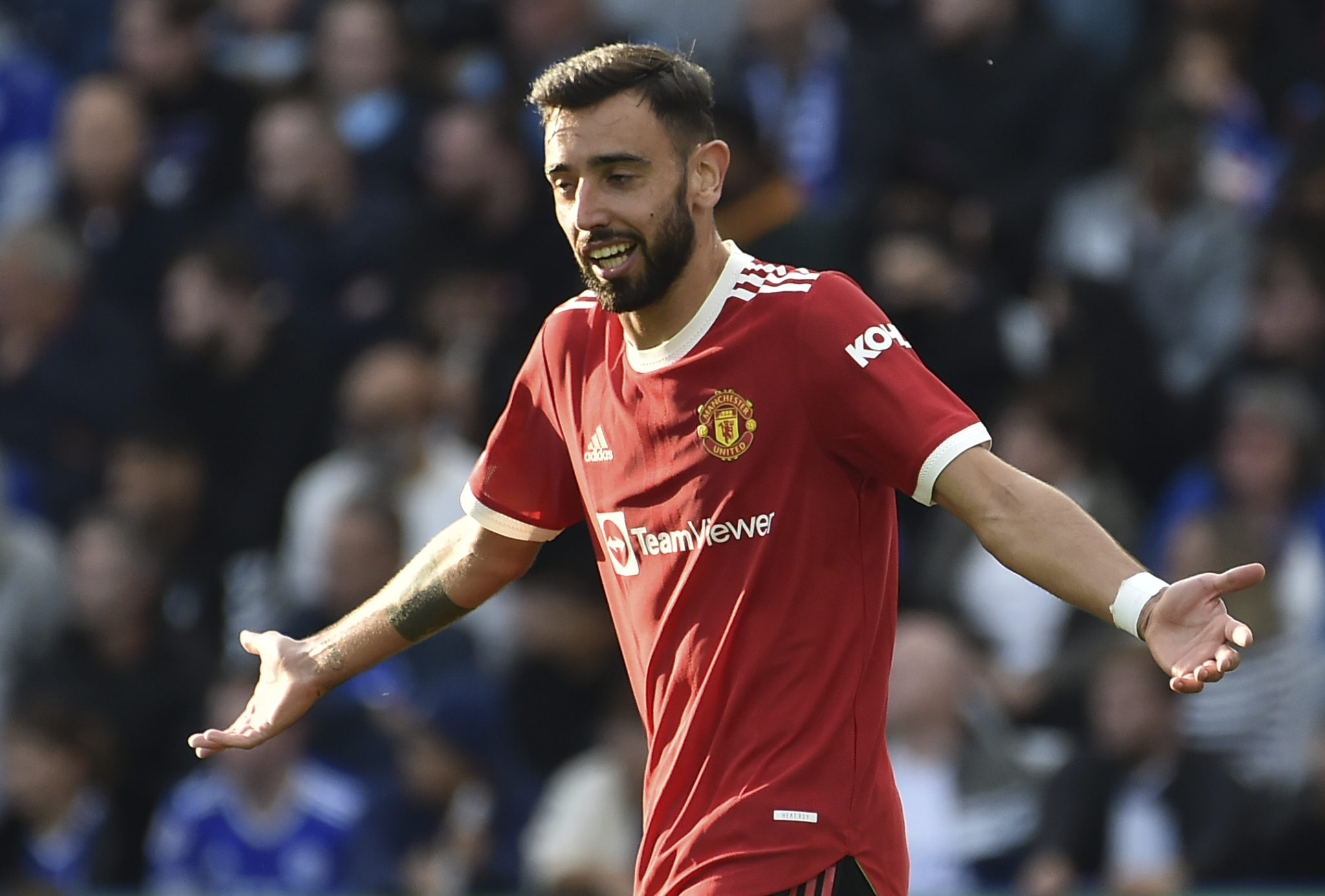 Silva is adaptable and effective no matter what his manager asks of him.

But still he's not one of City's best players. That's because they've continually invested in their squad over seasons so that they have players such as Kevin De Bruyne, Jack Grealish, Ruben Dias, Ederson and Rodri.

Right now, Riyad Mahrez and Raheem Sterling aren't regular starters for City. Mason Greenwood is one of United's best performers this season, would he be guaranteed to start ahead of those more experienced options? The argument is there regardless of which side you'd ultimately fall down on.

Firing Solskjaer will solve a lot of United's problems.

It won't make them title contenders. It won't reveal that they have one of the best squads in the league. Because they don't. No matter who the next manager is, they'll still be starting either one or two of Fred, Scott McTominay, Nemanja Matic and Donny van de Beek behind a front four or five that require more defensive support.

When Thomas Tuchel took over Chelsea, he could reposition good players and create a defensive shape that plugged holes Frank Lampard had created. A new manager can implement a new system and bring greater consistency, but he can't fundamentally change who these players are.

David De Gea is not on the level of Edouard Mendy, Alisson or Ederson. He hasn't been that player for years. And where their opponents boast world-class defenders, United have at best above-average Premier League starters in their back four.

By overselling the United squad, it becomes an easier argument to replace Solskjaer.

Solskjaer isn't good enough for the job. Replacing him won't make United title contenders but it will make them better.