Shamrock Rovers remain top of the table after a dominant 1-0 win away to St Patrick's Athletic, i...

Shamrock Rovers remain top of the table after a dominant 1-0 win away to St Patrick's Athletic, in Richmond Park.

Aaron McEneff scored the only goal of the game from the penalty spot after five minutes to give Stephan Bradley's side a massive win.

Shamrock Rovers went into the game on top of the table after their 3-0 win over Finn Harps in Tallaght on Monday night, and despite their extra game they were by far the sharper side in the opening 45 minutes.

We had to wait just five minutes for the opening goal of the game when Aaron Greene was brought down in the penalty box by Kevin Toner - Aaron McEneff stepping up for his second goal from the spot this year.

Just moments after Brandon Miele had missed a great chance at the other end, Greene pounced on a loose clearance from Toner to find himself straight through on goal, only to be fouled before he could get his shot off.

Aaron McEneff  calmly placed the ball into the bottom right corner; Not quite as fancy as his panenka a few weeks back against Derry City, but a goal all the same. 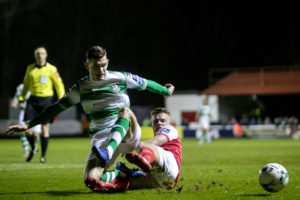 Rovers continued to dominate against a lackadaisical Pat's side and they could've double their lead on a couple of occasions; Dan Carr with the best of these chances, but he could only find the side netting after a nice counter-attack started by Aaron McEneff in his own half.

There were glimpses of good play from St Pat's at points in the game, Mikey Drennan a dangerous presence in the box but Rovers were deserved leaders at half-time, taking good advantage of a passive and sloppy St Pat's, to go into the break 1-0 up.

It took a while for the second half to spark into life, but when it did, it was again the visiting side who had the best of the chances.

The first came 15 minutes in when Roberto Lopes rose the highest to get his head on a Jack Byrne corner, Brendan Clarke pulling off a wonderful save; a goal mouth scramble ensued, but it was somehow cleared by the Pats' defence.

Clarke was called into action again moments later, Ronan Finn picking out Joey O'Brien at the far post, but the Pats' keeper was once again at hand to deny Rovers as second goal.

But the best chance of the half and, in fact the game, fell to Aaron Greene in the most calamitous of circumstances on the 78th minute.

An aimless ball played forward, Brendan Clarke came to claim it but Kevin Toner headed the ball over his keeper's and right to the feet of Greene. Six yards out and an open net, the finish was a bad as the defending leading to the chance.

It wouldn't matter though as Rovers managed to hold their nerve until the final whistle.

St Pat's will hope to improve on their performance when they travel to Waterford next Friday, while Rovers will go into their game with Sligo Rovers full of confidence.