The Republic of Ireland are off to a losing start in Group A of World Cup qualifying, with Stephe...

The Republic of Ireland are off to a losing start in Group A of World Cup qualifying, with Stephen Kenny's side suffering a 3-2 defeat at Serbia.

Alan Browne and James Collins found the net as Ireland got their first goals in over 11 hours on a night where Josh Cullen impressed. Here are our player ratings:

Could do little about Serbia's opener or third goal but was caught out positionally for Aleksandar Mitrović's sublime chip. On the occasion of his first competitive start, the Bournemouth stopper didn't enjoy the best night with the ball at his feet either and often went for long kicks forward rather than finding his teammates.

Tasked with playing at the right side of the central defenders, the Republic of Ireland captain again showed his versatility and tactical flexibility. Swept across well on multiple occasions when recognising threats. In his first Irish game since 2019, showed he can play in a new role for his country which could allow Stevens and Doherty to play in their best positions.

Was a step off Dušan Vlahović for Serbia's first goal but the West Brom youngster had an otherwise solid game in the three man Republic of Ireland defence. Has looked comfortable in his first five senior games.

Was beaten to a header in the lead up to Vlahović getting behind the Irish defence for the first goal for the hosts and was also bettered by Mitrović for their third. Otherwise played well alongside O'Shea and is likely to keep his place for the weekend.

Had a good game defensively but didn't get into as many good attacking positions as usual in attack. Has endured a tough season with Sheffield United and will hope to influence more on the front foot against Luxembourg.

Played in his preferred right-wing role and used that freedom to push forward and support the forwards. Will be disappointed with his final ball when he got into some good positions in the final third.

The Anderlecht midfielder was Ireland's best player in Belgrade. Made a strong case to become a regular starter with an assured performance, always willing to get on the ball and a tidy passing display.

Tasked with using his energy in midfield to break up opposition attacks and keep things moving for Ireland, the on loan Preston man had a solid game. Subbed on the hour for Jeff Hendrick.

Finally ended the Republic of Ireland's 11-hour wait for a goal. Deployed as a playmaker at the front of the midfield, he tried to make things happen in the final third and played some creative passes in the first-half in particular. Saw less of the ball after half-time.

Stephen Kenny said the Brighton attacker was "undercooked" going into the game after recently recovering from a rib injury. A willing runner and outlet in a more central role but had no clear chances before coming off midway though the second-half.

Provided a sublime cross for Alan Browne's goal while playing a free role in the Irish attack. Influence on the game faded as it wore on. His most effective work for Ireland again comes from the left rather than right wing for Ireland. 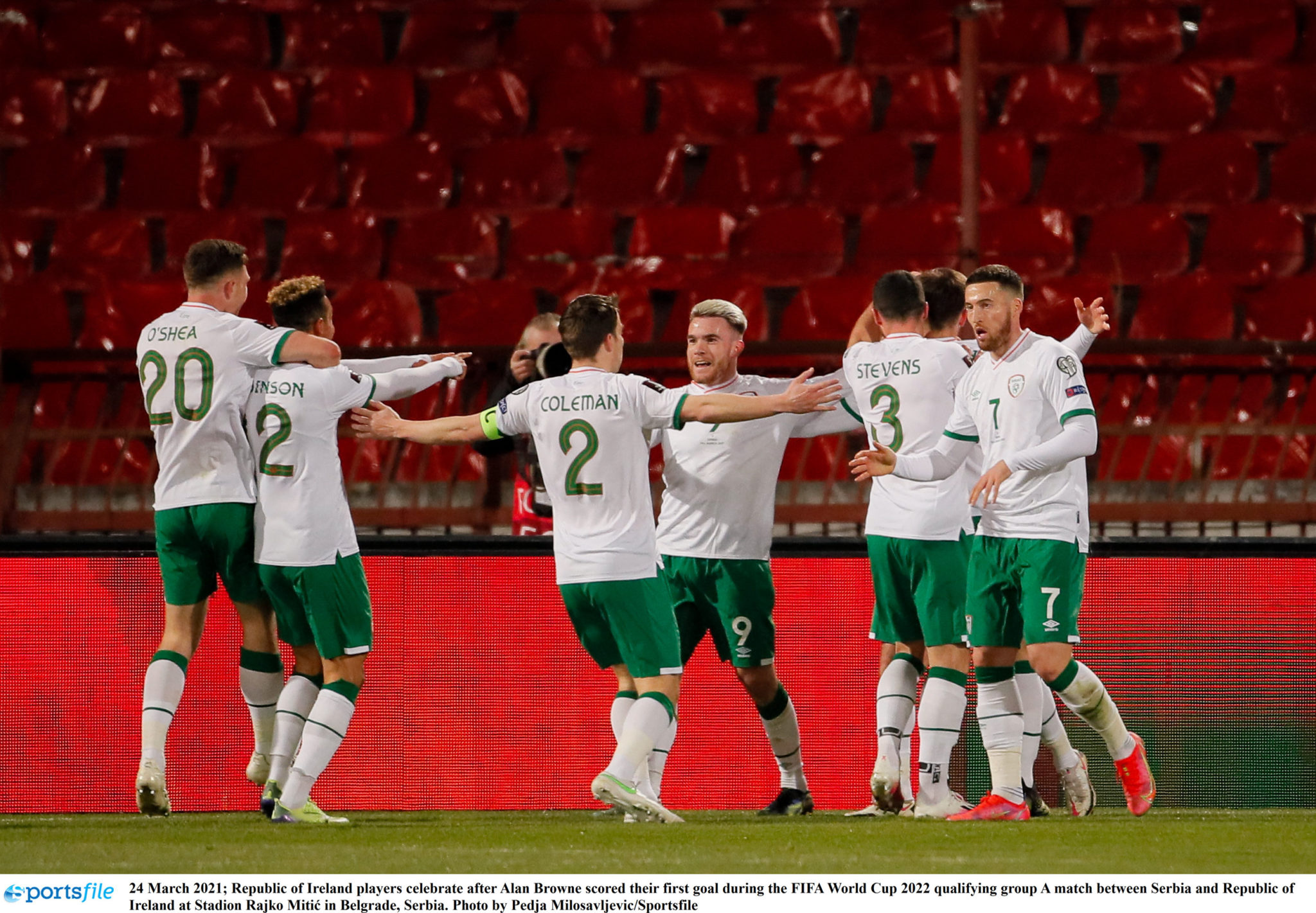 24 March 2021; Republic of Ireland players celebrate after Alan Browne scored their first goal during the FIFA World Cup 2022 qualifying group A match between Serbia and Republic of Ireland at Stadion Rajko Mitic in Belgrade, Serbia. Photo by Pedja Milosavljevic/Sportsfile

Replaced Alan Browne as an attacking midfield option in the final quarter, had a couple of attempted shots blocked.

Scored Ireland's second goal after a mix-up in the Serbia defence and the persistence of Shane Long to apply pressure. The Luton forward will be hopeful of leading the line against Luxembourg this weekend.

Provided a different option for Ireland when he came on. His pressing contributed to the defensive error which led to James Collins' goal.

Whipped in a couple of crosses from the left after coming on and added some energy in the final third.