Former Manchester United and Ireland captain Roy Keane has shared his verdict on Paul Pogba's performances at Old Trafford and while Keane is a fan, he thinks there's much more to come from the French midfielder.

After missing a large chunk of the season due to an ankle injury, the Covid-related break appears to be a blessing in disguise for Manchester United fans and Paul Pogba. While Bruno Fernandes has become the new darling fo the Stretford End in Pogba's absence, the World Cup winner has looked rejuvenated and motivated since coming off the bench in United's 1-1 draw with Spurs.

Granted, that hasn't always been the case with Pogba as Mourinho and Solskjaer have struggled to get the best out of the Frenchman since his move from Juventus.

Speaking with the Sunday Independent, Keane does think that Pogba is an outstanding talent. However, Keane also believes that he's lacking consistency.

“The key for Pogba, if he wants to become a really important player for Man United, is consistency. It’s no good turning up every two or three weeks and producing your piece of magic.

“I think he is more than capable of doing it, he has done it before. But do it week in and week out and get Man United competing for titles. I have a lot of time for him. I think he’s a talented boy," said Keane. 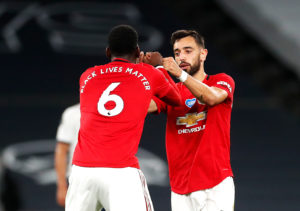 Having won 17 major trophies at Manchester United as a player, Keane knows what's required to make the grade and thrive at Old Trafford, but the former Ipswich and Sunderland boss thinks that some of the criticism towards Pogba has been unfair.

“If you are not performing week in, week out people are going to get on your back. I always say there is a compliment in that. People know he’s an outstanding talent but for some reason, it hasn’t gelled. He obviously had the injury problem this season. Just because a player is having a difficult time doesn’t mean they aren’t giving their all. Sometimes a player might be carrying a few knocks. Players lose a little bit of confidence.

“Everyone is quick to criticise Pogba for his off-the-field stuff, but let me tell you if Pogba was winning week in and week out for United people would tolerate his off-the-field activity, his social media activity.”

As for Pogba's immediate future, he'll be expecting to return to Utd's starting lineup when they travel to Brighton on Tuesday.