Despite enjoying a successful club career with some of England's biggest sides, Robbie Fowler's international experience never managed to hit the same heights as he explained on Wednesday's OTB AM.

A prodigious talent who's Liverpool breakthrough came a few seasons shy of the club's heyday, it is telling of Robbie Fowler's England experience that he was on his way to winning the PFA Young Player of the Year award for a second time before earning his first international cap in a friendly against Bulgaria in March 1996.

Selected by Terry Venables for England's Euro '96 squad, his direct competition came in the form of Alan Shearer, Les Ferdinand and Teddy Sheringham.

Ruled out of contention for the 1998 World Cup through injury, by the time Euro 2000 rolled around, Fowler and Shearer were joined by Michael Owen, Emile Heskey and Kevin Phillips as England's attacking options.

Darius Vassell and a returning Sheringham replaced Shearer and Phillips for the World Cup two years later, yet, in what would be Robbie Fowler's third and final appearance at an international tournament, the striker's playing time in all three amounted to the same number of substitute appearances therein.

Earning 26 caps in total, it is little wonder that the Liverpool native holds little fondness for this portion of his career.

"If I'm being totally honest," he explained on Wednesday's OTB AM, "had I played more games for England I might have a different feeling.

"I just never felt part of an England set-up because I never really played. I was a passionate player and I wanted to play all the time."

Ultimately, because I wasn't a regular I wanted to get back to Liverpool as soon as possible and play with them. I was comfortable there and knew I was playing 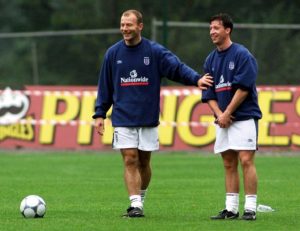 A Liverpool native playing for one of the city's two major clubs, there was rarely any uncertainty surrounding his importance to Liverpool throughout the 1990s.

Only three goals shy of the fifth-placed Steven Gerrard in the club's list of all-time top goalscorers, the allure of English duty never quite matched up to what Robbie Fowler had at home.

"Ultimately, because I wasn't a regular I wanted to get back to Liverpool as soon as possible and play with them," he admitted. "I was comfortable there and knew I was playing."

Yet, in a week where club loyalties have infiltrated the English set-up by way of Raheem Sterling's interaction with Joe Gomez, Fowler doesn't really recall ever losing perspective of what players from different clubs were there to do when called up to the England squad.

"With international football," he explained, "you're playing and training with your rivals, but you've got to be sensible enough to know that we're all here doing the same job.

"I never really was uncomfortable playing for England because I never really played and I never really felt proud of it, but I never once turned up thinking, 'Oh, I can't stand these Manchester United or Chelsea players.'

"Ok, they weren't my big massive mates, but I appreciated the good football we played and that they were good people."

You can watch back Robbie Fowler's interview in full here.