Former Manchester City defender Richard Dunne joined Off The Ball on Tuesday to talk modern football managers and the influence of Sven-Göran Eriksson.

Eriksson coached Dunne at City for the 2007/2008 season, with him being released from his contract at the end of the season.

Despite this unfortunate end to his time with City, Dunne thinks that the Swede was one of the best managers he played for.

“I probably enjoyed it under Sven, he was really good when he came in,” Dunne said.

“Respect each other, respect all the staff, respect everyone who works there, and we’ll get through it.”

Dunne suggested that his relaxed style of managing was what the team needed at the time.

“It was just a breath of fresh air; he wanted to relax, he wanted people to enjoy the work that they were doing,” Dunne said.

“We did reasonably well with him that season, we were good.

“The club was in a bit of a state I suppose with the owner that we had.”

Eriksson’s style of managing was to get the players involved and to keep them informed with everything he was doing, according to Dunne.

“He involved the players, he told us what he wanted,” Dunne said.

“He used to speak to us about players he wanted to sign, about where he though the team could improve and stuff like that.

“He made it a really good dressing room and place to be. People enjoyed coming in.

“It was unfortunate how it finished up for him, but it was a good experience to work with him.” 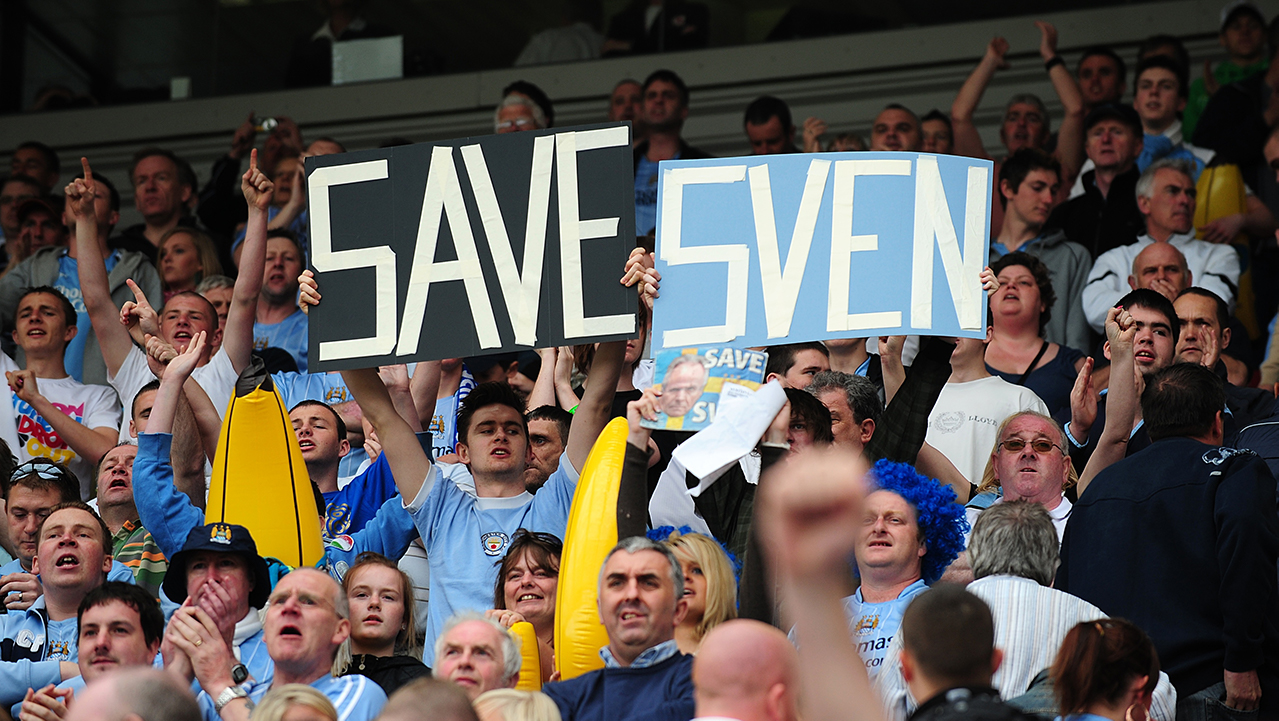 Manchester City fans show their support for manager Sven Goran Eriksson in the stands prior to kick off. Gareth Copley/PA Archive/PA Images

Eriksson was able to get the best out of his players by creating an environment that relaxed the players, according to Dunne.

“He had the personality about him that he wanted the players to be happy, to be going into the game on a Saturday or mid-week and feeling confident and comfortable in what they’re doing,” Dunne said.

“You look at the success that Martin O’Neill had at Aston Villa, everyone who spoke about it, there was no great master plan or whatever.

“Players would just walk out onto the pitch feeling 10-foot-tall; and I’m sure it was the same when he was at Celtic.

“That’s not down to tactical work or anything like that. That’s just down to good man management and keeping players happy.”

In the modern game, managers like Jürgen Klopp and Pep Guardiola have brought a focus on tactics and analysing play.

Dunne thinks that the ability to manage players was more important than the tactics that Eriksson employed.

“Obviously the game has changed slightly in recent years with the different tactics that Pep has brought over and Klopp has introduced,” Dunne said.

“It does get more like that, but at the end of the day the only way that you can make a tactic is by the players buying into it.

“If they don’t like it or they don’t believe in you, your tactics will go out the window.

“You have to have that personality so that the players feel that they want to work for you and they want to implement what you are trying to do.”

Football on Off The Ball with Paddy Power – new normal? Same old football.

Visit PaddyPower.com to get the latest on the Acca-Cracker Free Bet.

Hourihane | "We have to come out fighting on Wednesday night"

Danny Ings facing up to six weeks out with knee injury

Villa sign Ross Barkley on loan for the season