CONFIRMED: Lionel Messi to stay with Barcelona after all

Lionel Messi is to stay with Barcelona.

TyC Sports - who broke the story about Messi's burofax to Barcelona - broke the news this afternoon that he will remain with the Catalan giants.

Goal have now confirmed that Messi is staying at the Camp Nou, ending the dullest soap opera since Shortland Street.

"When I communicated my wish to leave to my wife and children, it was a brutal drama,” Messi told Goal.

“The whole family began crying, my children did not want to leave Barcelona, nor did they want to change schools.

“But I looked further afield and I want to compete at the highest level, win titles, compete in the Champions League. You can win or lose in it, because it is very difficult, but you have to compete."

Messi says the only way he could have left this summer was to go to court, but told Goal, "I would never go to court against Barca because it is the club that I love, which gave me everything since I arrived.

“It is the club of my life, I have made my life here.

“Barca gave me everything and I gave it everything. I know that it never crossed my mind to take Barca to court.”

It follows a morning of claim and counter-claim from Messi's agent - his father Jorge - and La Liga.

Messi has claimed that there is a clause in his contract allowing him to leave for free at the end of a season. This claim has been rebuffed by both Barcelona and La Liga who say his €700million release clause is still in play.

"We do not know what contract you have analysed and one what grounds you conclude that there is a recission clause applicable in the case of him deciding to unilaterally end his contract from the end of the 2019/20 season," read a statement from Jorge Messi on Friday.

It continued with a broadside at La Liga president, Javier Tebas, "As clause 8.2.3.6 of the contract signed between the club and the player explicitly says: 'This indemnity will not apply when the player's decision to unilaterally rescind the contract is effective from the end of the 2019/2020 season'.

"It is obvious that the compensation of 700 million euros provided in the previous clause is not applicable at all." 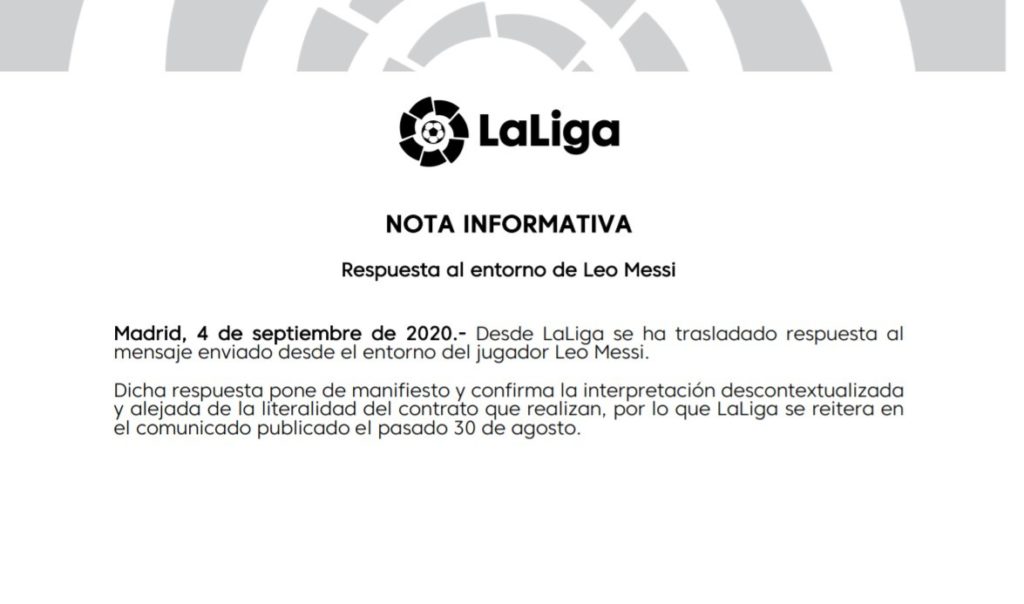 La Liga shot back almost immediately, saying the Messis' interpretation of that release clause is wrong, adding, "This said response reveals and confirms that the interpretation has been decontextualized and that it is far from the literal nature of the contract."