Do you remember the 21st of September? Vera Pauw certainly would - that date marked a famous 3-2 ...

Do you remember the 21st of September? Vera Pauw certainly would - that date marked a famous 3-2 victory for her Ireland side over Olympic semi-finalists Australia in an international friendly at Tallaght Stadium.

Exactly a month later, Ireland found themselves on the wrong side of a one-goal margin.

A desperately unlucky Louise Quinn own goal proved the difference as they fell to a 1-0 home defeat against Sweden in their opening World Cup qualifier at Tallaght Stadium on Thursday evening.

Despite a superb performance from goalkeeper Courtney Brosnan, the Girls in Green could not capitalise on frailties in the Swedish backline and snatch an equaliser.

Here's how the Ireland players rated after a frustrating night in Dublin 24. 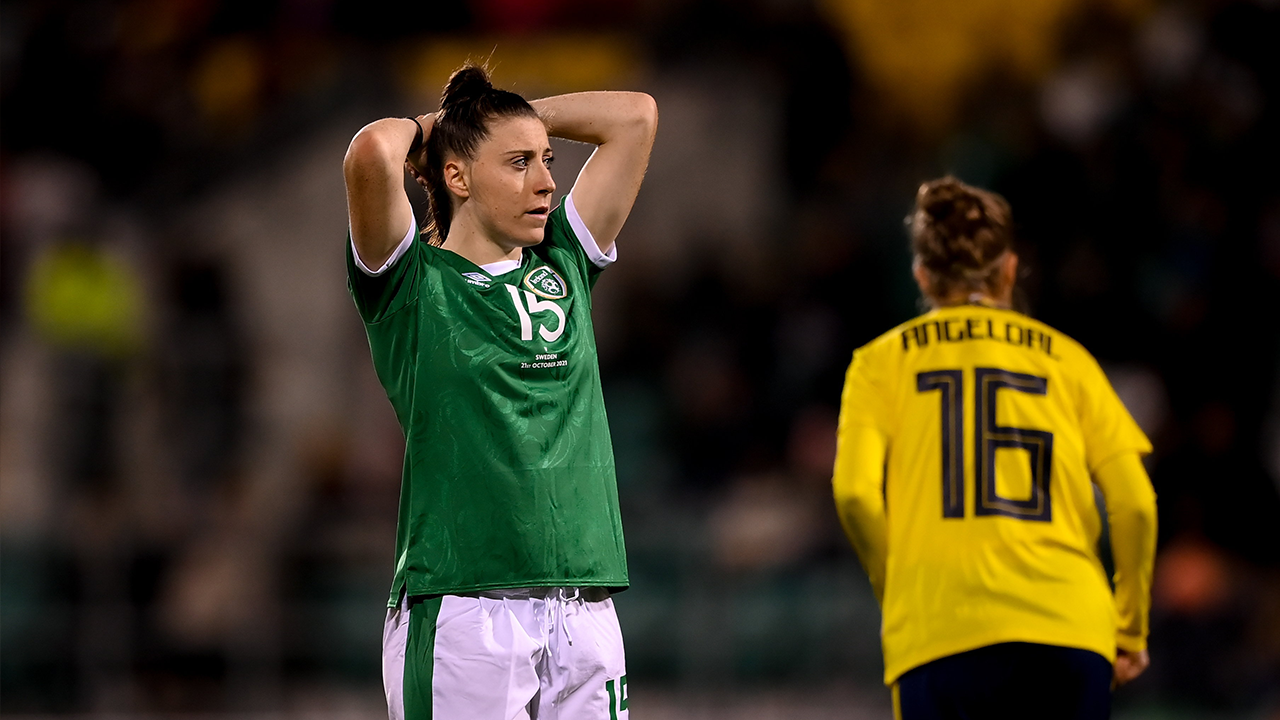 While there was some concern around the mistakes she has made at both club and international level, Pauw opted for the Everton goalkeeper over Grace Moloney. Brosnan responded with an assured performance between the Irish sticks, including a terrific save at full stretch to deny Filippa Angeldahl on 35 mins. Could do very little to stop the decisive goal.

Could do very little to subdue Sweden's primary attacking threat Stina Blackstenius. Was in the wrong place at the wrong time when Blackstenius' otherwise poor shot deflected off her left shin and into the Irish net. Pushed up the field as Ireland pressed for a goal late on, but for nought.

Another one of the Ireland centre-backs who could not silence Blackstenius. Too busy dealing with the Swedish attack to make enough of an effort anywhere else on the pitch.

Perhaps the strongest performance of that Irish back-three, McCarthy made some vital interceptions as the Swedes began to pour forward. Gave away the ball far too cheaply on a couple of occasions. Her shove on Blackstenius in the box late in the game could've cost Ireland a penalty.

Part of a porous Irish midfield that gave possession back to the visitors too easily. Made a lung-busting run for a crucial block in stoppage time as Blackstenius looked set to double the Swedish advantage.

A frustrating night for the North Carolina Courage midfielder. Sloppy passing and poor execution from her Irish teammates meant that O'Sullivan could impose herself in a meaningful way in terms of attack. Left the pitch carrying her right arm in her jersey at full-time - would be a huge blow to Pauw if she is injured for the game against Finland on Tuesday.

In blistering form for Arsenal in this season's WSL, McCabe had a slow start to tonight's game. She lacked that usual polish in the set-piece during the first half, but found her range in the second half; her dangerous corner with 10 minutes left possibly the best chance for Ireland to nab a vital goal. She was limping towards the end of the game - Ireland cannot afford to lose their star player.

Pushed up to provide attacking options for Ireland, leaving huge space behind her on the right which Blackstenius gobbled up. Gave the Swedish forward the space for her run which led to the goal. Finn was also very fortunate not to give away a penalty after a clear foul on Blackstenius. Her superb ball into the Irish forward provided the most promising Irish attacking opportunity.

It was a difficult night for the Irish midfielder after a bright start. Nicely teed up the ball for a long-distance shot from McCabe on 10 mins, but faded as the Swedes began to dominate. Her side-footed shot early in the second half was the only other moment of note in an otherwise lacklustre evening.

The Peamount player struggled to figure herself in this game. A last-ditch tackle in the dying throes of the game prevented a second Swedish goal, but little else to report.

The sheer dominance of the Swedish centre-back pairing of Ilestedt and Eriksson completely neutralised Payne, who failed to make any sort of impression on the game. Called ashore on 73 minutes.