Phil Foden is reportedly unhappy with his social media team after a tweet targeted at Kylian Mbap...

Phil Foden is reportedly unhappy with his social media team after a tweet targeted at Kylian Mbappe was published following Manchester City's defeat of Dortmund on Wednesday night.

On a night where Pep Guardiola finally guided Manchester City into the semi-finals of the Champions League, he would have had reason to be pleased with the contribution of Phil Foden.

The late goalscorer one week ago to give City a 2-1 lead going into Wednesday's game, the English midfielder struck again last night to seal the tie in City's favour.

As the club celebrated victory and cast one eye toward that upcoming series of games with PSG, however, the social media team of Foden were still hard at it.

With a tweet that has reportedly left the City starlet quite unhappy, his Twitter account appeared to directly address PSG's talismanic Kylian Mbappe ahead of the clash. 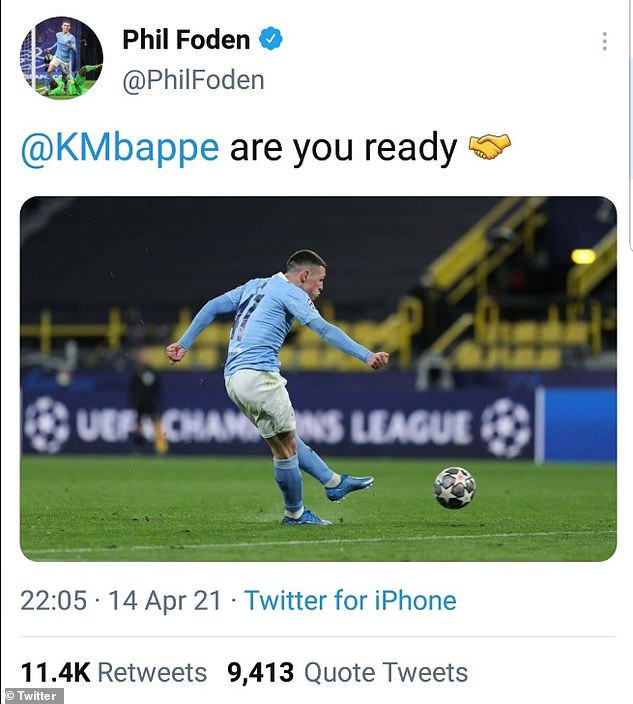 The City and England star quickly instructed for the post to be taken down and it was subsequently removed.

Phil Foden is not the first footballer in recent memory to feel the brunt of inappropriate social media messaging, however.

Back-up Spurs goalkeeper Joe Hart had to apologise after his Instagram account had published an image following the club's Europa League exit that celebrated the result.

"I feel like I need to come on and make an apology on behalf of my social media team," he explained via Instagram on Friday morning.

"It's just been brought to my attention - I've literally just woken up - that someone thought that we had won 3-0 last night. Sloppy as it sounds, that's the truth."

There is no indication yet of what Phil Foden and his representatives will do regarding the errant Twitter post. In the mean time, Manchester City will resume their Champions League action against PSG later this month with the first-leg taking place in Paris.