On the day that Paul McGrath turns 60-years-old, Kenny Cunningham took the opportunity to share h...

On the day that Paul McGrath turns 60-years-old, Kenny Cunningham took the opportunity to share his thoughts on playing alongside one of his heroes for the Republic of Ireland.

"I wouldn't have any idols as such," admitted former Republic of Ireland captain Kenny Cunningham on Wednesday's OTB AM, "but I loved Paul as a footballer.

"We didn't share any attributes, obviously, but the level to which he played and just his back story.

"I read his book (Back from the Brink) - one of the very few footballing biographies I've read - and I was interested in the man.

"I didn't have a relationship with him as such, but we were teammates for a short period of time and the most important thing is that he's still here with us and having his good days."

Even a pat on the back, the smallest of things, telling me, 'Well done, great header, good tackle.' That meant a huge amount coming from Paul 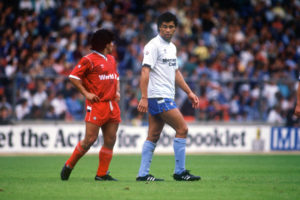 An enormously talented footballer who would spend the guts of 15 seasons playing top-flight football in England for the likes of Manchester United and Aston Villa, Paul McGrath, best remembered in Ireland for his displays with the international team, was approaching the end of his career just as Kenny Cunningham's time with the seniors was getting off the ground.

"It was one of the stand-out moments of my career," he said of earning his first two international caps alongside McGrath. "Two friendlies against Czech Republic and Wales - nobody will remember them, but I was 10ft tall because I was beside Paul."

Peerless as a centre-half in Cunningham's mind, the former Wimbledon and Birmingham City man shared some insight into what it was like playing alongside McGrath.

"He was a good talker," revealed Cunningham. "People always say how quiet he was, wouldn't say boo to a goose.

"He wasn't a shouter or a screamer, but he would have given me a lot of good information.

"Even a pat on the back, the smallest of things, telling me, 'Well done, great header, good tackle.'

"That meant a huge amount coming from Paul."

The focus of a wide-reaching discussion on Tuesday's OTB AM, you can watch back Kenny Cunningham sharing his memories of Paul McGrath below.

"He'd give me a wee pat on the back - 'Well done, good header.' It meant a huge amount to me coming from Paul McGrath." ️⚽️

Kenny Cunningham doesn't have many idols, but one of them turns 60 today | Here's to @Paulmcgrath5 🇮🇪 | #OTBAM pic.twitter.com/3X4AOvZ8jb