"Pat Fenlon came in and started going around the room saying, 'You're not good enough'"

The most evident thing to come out of Michael Jordan’s documentary ‘The Last Dance’ has been mentality. The mental strength you need to get to and stay at the top level of the game.

As we look back on his career, Owen Heary's mentality is something that sticks out. From making his senior debut for Kilkenny City at 16 to winning seven league titles, he was willing to do what it takes to be successful in the League of Ireland.

For the Cabra native, that drive started from a young age where he played senior football instead of schoolboy football, in the Phoenix Park. That led to an opportunity to play for Kilkenny City in the First Division at a young age.

“I had to borrow a shirt and tie from my Dad for games because the only ones I had was from my school uniform,” Heary said speaking on Team33.

Having spent a season at the club and made a few appearances at right-back, he turned down offers to move to Finn Harps and instead opted for Home Farm who were a little closer to home.

As luck would have it, the man who had tried to sign him for Finn Harps - Dermot Keely - took over at Home Farm soon after Heary had made the move.

He is also the man who brought him to Shelbourne a few years later, although had mobile phones existed, he may have ended up on the other side of Phibsboro.

“I had actually signed and then Bohs asked me to sign for them.”

“Dermot gave me the contract. Believe it or not, he gave me a few drinks and I had no idea what I had signed for, I had to ring him the next day. Bohemians ended up coming in then and one of them asked me to meet them down in Bohemians bar in Phibsboro.”

She said that some fella was after ringing the house saying they couldn’t find you so they’re coming up to the house.”

“So as I went back, I was sitting there and it turned out the man that walked by me in the pub was the fella who was trying to sign me.

Unfortunately, I had already signed for Shelbourne and I followed Bohs so I was a little peeved out about it at the time because I always had it in my head that I would play for them.”

Heary was coming in as a back-up right-back for Keely but things weren’t rosy, to begin with, and at that level, it didn’t take long for senior players to let him know.

Some players could have crumbled under this pressure, Heary chose to stand up for himself, a brave move for such a young player but one that ultimately garnered the respect of the older players and the manager.

“Dermot then asked us for our opinion and I said ‘look I don’t care what he says, I know I’m good enough and I’ll prove it”.

“I think then the three other lads were let go and I was the only one who ended up staying”. 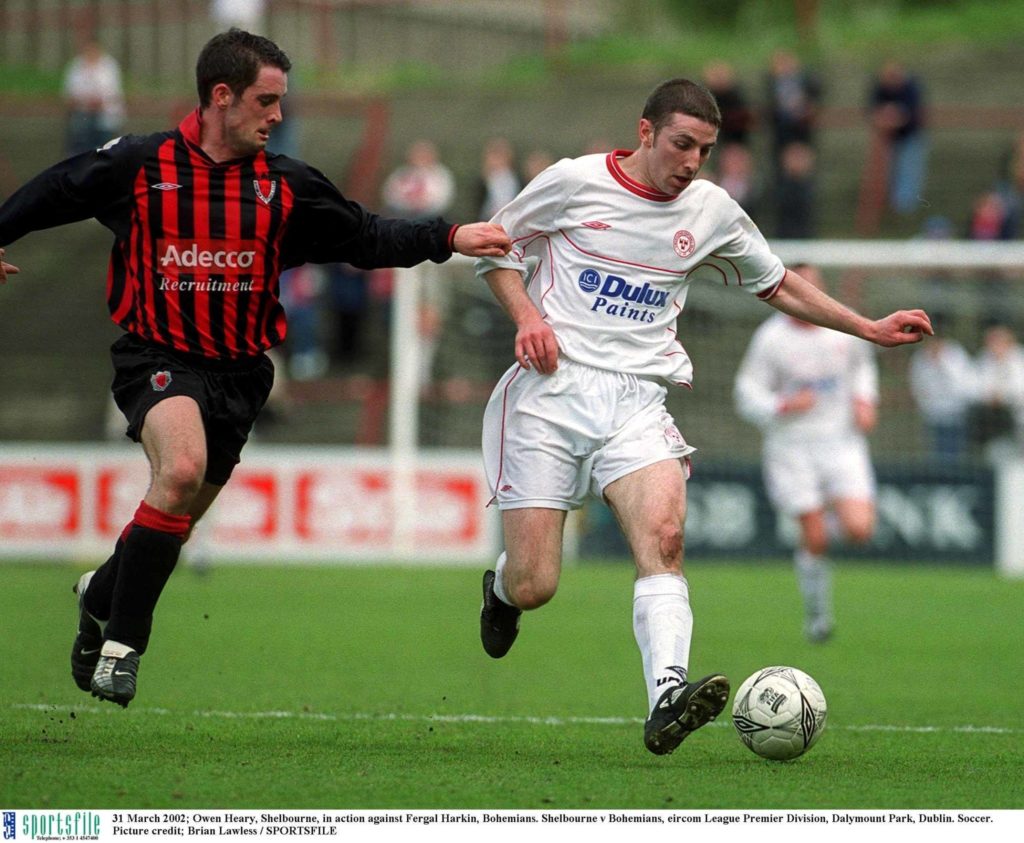 Fenlon would go on to manage Shelbourne at the turn of the millennium which brought the club to another level in terms of success.

Having won the league in his first two seasons at the club, Fenlon led Shels on one of the most memorable European runs in recent history for an Irish club.

Victories against KR Reykjavik and Hajduk Split left them one game away from the group stages, standing in their way, however, was Deportivo La Coruna - who were semi-finalists the year prior.

The first leg was played in Lansdowne Road and for Heary, these games highlighted the special nature of the League of Ireland.

“I remember leaving Citywest Hotel and you had thousands of fans going to the game wearing Rovers’ jerseys, Bohs’ jerseys, Pats’ jerseys, the whole league. Every team in the league had fans there with their jerseys on.

“There’s something special about European nights in Ireland that supporters from other clubs are going down to the game and supporting the Irish team. I don’t think there’s any other league in the world where you’d get that.”

“Coming away with a draw against one of the best teams in Europe was magnificent for a League of Ireland team. I even remember we had a chance in the game. I crossed the ball into Jason Byrne, nine times out ten he’s hitting it perfectly and it’s going into the net”

“Unfortunately, the one time that he did get that chance, he miss-kicked it which was unlike him. If that goes in what a marvellous result that would have been but it wasn’t to be and we drew 0-0, which is still a good result against a great team”.

The return leg wasn’t as tight as Shelbourne fell to a 3-0 defeat to the Spaniards, but the pain of crashing out of Europe would be matched and more by the turmoil that faced the club in the years following. 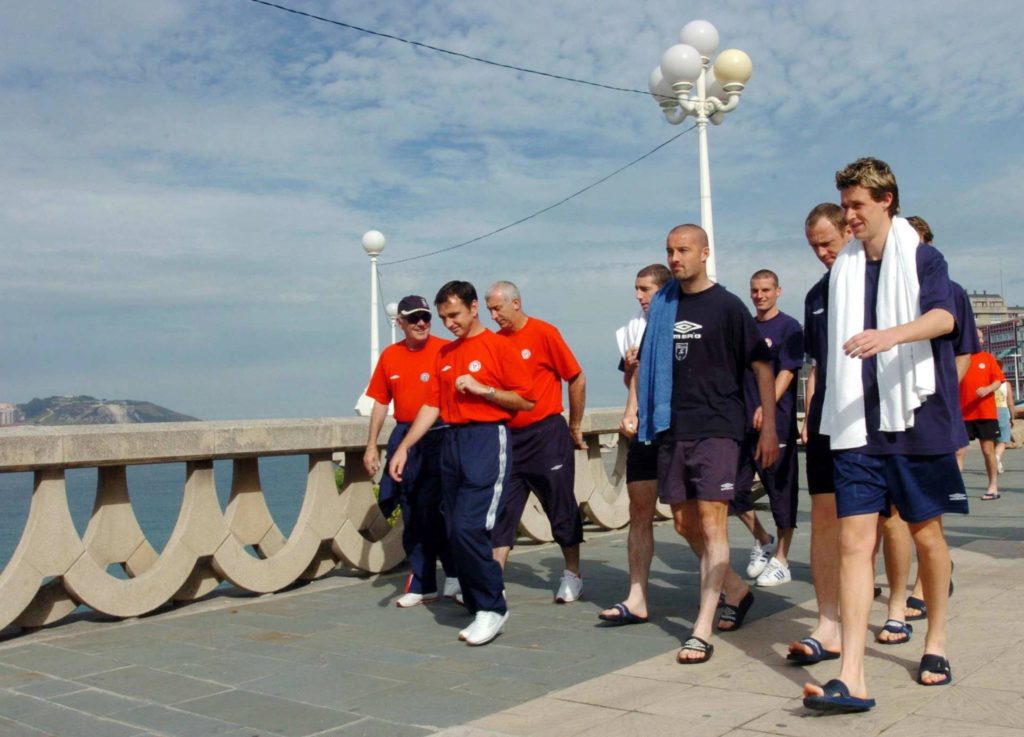 Years of overspending and over-reliance on European funds had brought the club to its knees financially, players went months without pay which inevitably ended in a mass exodus of players.

The club captain at the time, Heary was in the difficult position between his loyalty to the club and his need to maintain a career in the league. Eventually, he forced a move and landed where it could have all begun, Bohemians.

Coming from a side that had won the league five times in six years, Heary held a certain standard and it became evident to him, those standards weren’t being met when he first arrived at Dalymount Park.

“We were a full-time club that were doing things that you would do at a part-time club, we were training like a part-time club and we needed more focus. We needed to turn up every day, do the hard work and I think I didn’t feel as fit as I could be because of it.”

“Whatever happened with Sean, the club let him go and Pat came in. We still had the basis of the squad from the year before and we just got so fit that we went on to win the league by numerous amounts of points”.

“That shows you that it was just that one little thing that needed to be tweaked that turned us from a team that finished third, to a team that dominated the league”.

Eventually, at the ripe age of 38, Heary decided it was time to hang up his boots and take a step into management. An expected mood for someone with his leadership qualities.

Unfortunately, Bohemians would suffer a similar fate to Shelbourne as the club ran into financial difficulties and Heary received an offer to take over at Sligo Rovers.

“The biggest and worst decision I made was probably leaving Bohs in the first place. The reason I left was full-time football, I was offered more up there and promised a few things."

Sligo had won their first league title in 35 years just three years prior but had failed to push on from their success in 2012 and results didn’t improve under Heary.

“I was trying to change a few things in terms of professionalism there. Unfortunately, they didn’t want me there, which is fine but they needed to do things properly and say ‘look, we’re letting you go, end of story’”.

“I’m doing Setanta Sports and they come up with the idea of releasing a statement saying that I agreed that I would finish up which I did no such thing.

"It was just bizarre because when you’re dealing with a lot of professional people over your career, at Shels and Bohs and you expect that at other clubs, too.

“It was just one of those things that happened and you have to move on and try get to the next stage of your career.” 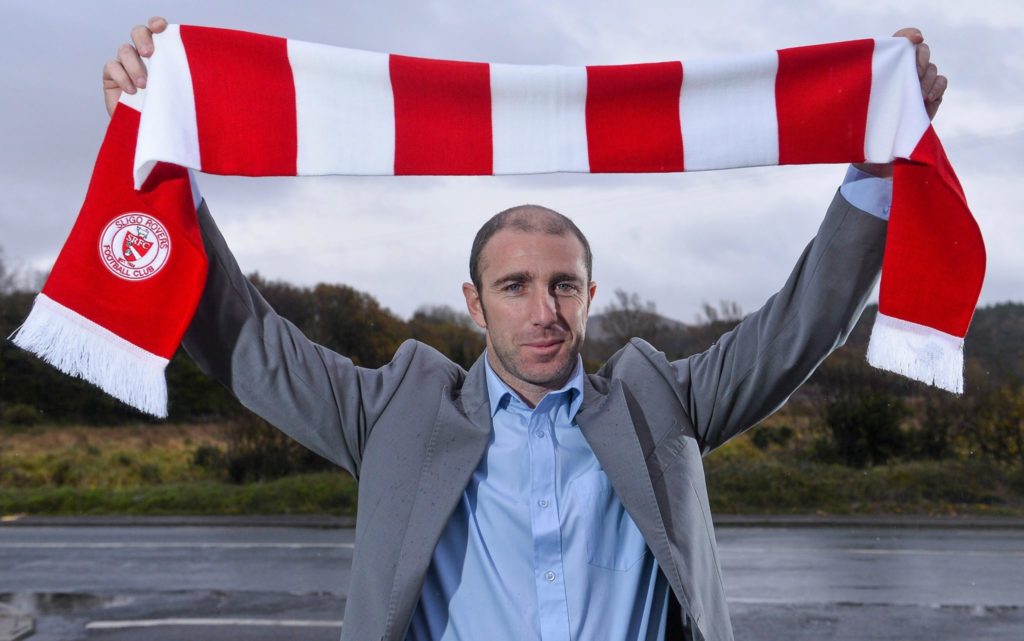 The next stage of his career would be a move back to where it began as Heary took over a Shelbourne side struggling on and off the field in the First Division.

“When I was asked to go in, they asked me to come in and steady the club. Kevin [Doherty] had left and I said I’d go in and see where we progressed.”

“I felt when I went in that there was no winning mentality in the club anymore. They’d be winning 1-0 and end up losing 2-0, they could be 3-0 up and end up losing 4-3, so you have to go in and change that around”.

Slowly, improvements were made as Shelbourne finished sixth in his first year in charge. The following year a fourth-place finish and Heary was optimistic about the future of the club.

“It showed that we were starting to get the Shelbourne name back. Teams were asking for friendlies against us. We started to get a team together that the Shelbourne fans could be proud of again.”

“The season we finished fourth, any other year that would have been enough for the play-offs but they changed the rule that year. The following year we got into the play-offs.”

“A new owner came in - Dave O’Connor who used to play for Shamrock Rovers came in as the CEO. I thought things were going grand and I asked the owner if he wanted me there and he said ‘Oh yeah, definitely want you there. Keep going’”.

Again, it would be a frustrating and abrupt ending to his stint with the club as they decided to replace the former club captain with the up-and-coming manager Ian Morris.

“Then, low and behold he comes up to me and says we’re going in a different direction. Which took me by surprise because of the amount of work I was putting in, I wasn’t getting much money for doing it.”

“I spoke to one or two of the board members who said they voted for me to stay but the owner had his own idea which is fine but it was done a bit upper handed so that wasn’t nice.”

“I think it’s unfinished business for me. Look, I’m glad the club are doing well now, I’m glad they’ve put money into it, they’ve gone on to win the First Division and in the Premier [Division].

"That’s something I wanted to achieve with them and I think I set the ball rolling for that and Ian Morris has done a great job since he has come in.

“I’m delighted for the club but I’m unhappy with the way that it went at the end. Again, you’d like people to be honest but they weren’t honest come the end and that’s the one thing that annoys me.”

Bohemians Football League Of Ireland Off The Ball Shelbourne