It was Stephen Kenny's first win in a competitive game.

He needed it too.

Ireland beat Azerbaijan 3-0. They created 18 chances and played more direct football. Part of that was Azerbaijan pushing high upfield, which meant Kenny's team had to adapt. After a controversial week, Callum Robinson was the star for Ireland on the field.

Robinson scored two goals from outside the box. Chiedozie Ogbene headed in the third from a corner. Neither Troy Parrott nor Aaron Connolly were involved. Both Parrott and Connolly started when Ireland drew at home with Azerbaijan previously.

Kenny Cunningham believes this result was a sign of the progress of the team.

"Was it perfect? Absolutely not," Cunningham said.

"But generally speaking, I was pleased with what I saw. I think there's the bones of a team coming together there. I've seen it over the last couple of games despite some of the results. There was a period of time maybe six months ago...I wasn't too sure in terms of formation and where we're going, in terms of personnel, even combinations.

"The last couple of games it looks like Stephen has settled on that back three and the wing backs so that's good. They're the foundation blocks."

Cunningham sees Josh Cullen as integral in the central midfield and the back three as the foundation of the team. There's a real sense of the team coming together and there are clear pictures of what they are trying to achieve.

The question marks remain upfront because Parrott and Connolly are such exciting talents, but Kenny got it right on Saturday according to Kenny.

"I thought Stephen got it right.

"If you flip it to the previous game against Azerbaijan at home, the front three that night were such an inexperienced front three I think it showed that night. There was very little combination play between the three. They separated themselves from the rest of the team. The balance didn't look right but last night it was a lot better." 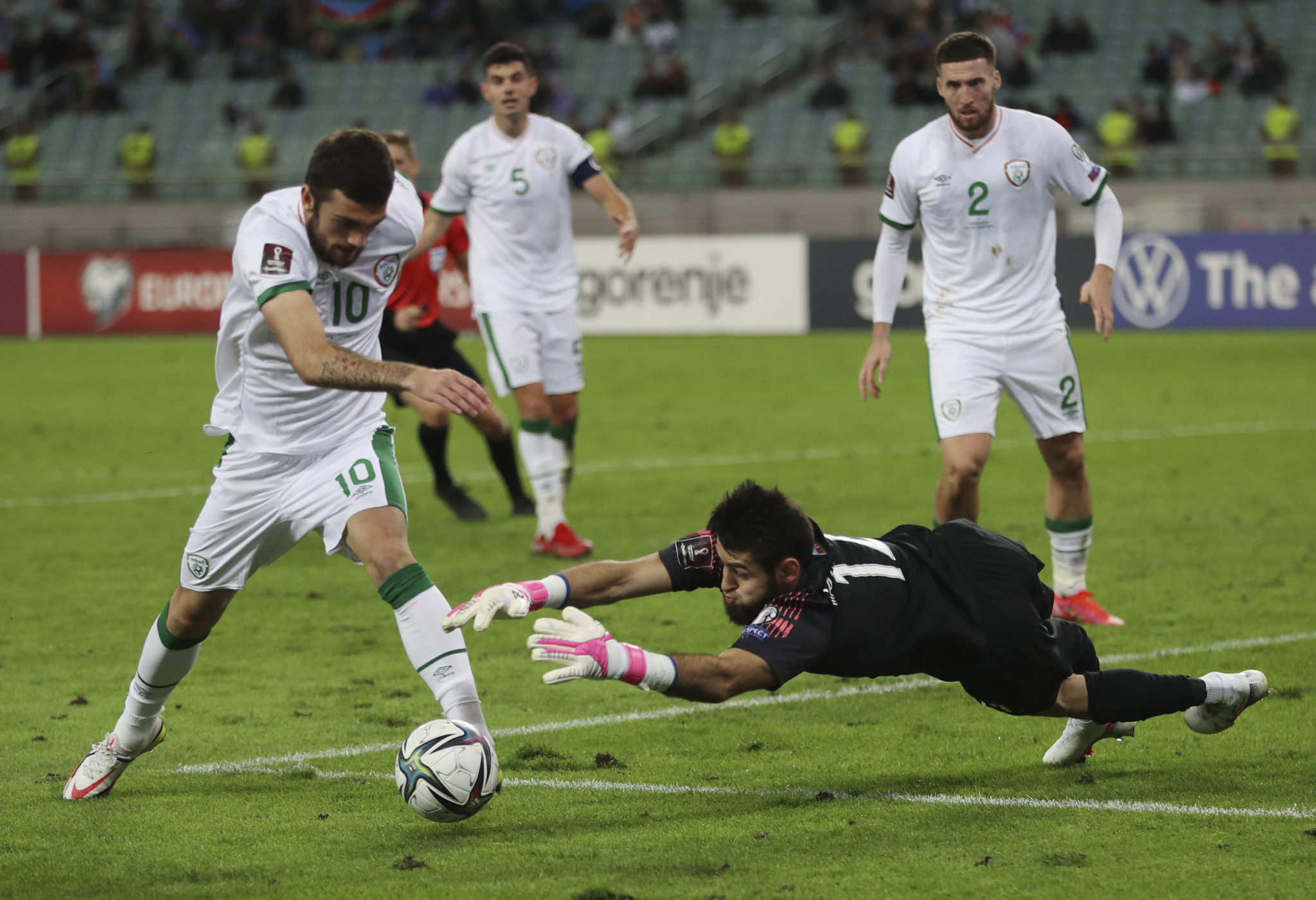 Republic of Ireland's Troy Parrott, left, tries to score past Azerbaijan's goalkeeper Shakhrudin Magomedaliyev during the World Cup 2022 group A qualifying soccer match between Azerbaijan and Republic of Ireland at the Olympic stadium in Baku, Azerbaijan, Saturday, Oct. 9, 2021. (AP Photo)

Although the younger players struggled in the home game, Cunningham isn't writing them off just yet either.

"The more I look at Parrott, he played right of a three that night against Azerbaijan. I'm not too sure. He looks like a player for me that has to play in the central area. He'd like to play upfront on his own or in a central striking pair. Playing right of a three, there's real significant differences there."

Parrott played everywhere for Ireland's under-21 team and was effective everywhere. At senior international level, it's a tougher task to do that. He's naturally a striker or someone who can play in the hole behind a striker. Fitting him into this current system will be difficult.