Gerry McAnaney, the long-time Defence Forces representative on the FAI Council, is the new presid...

Gerry McAnaney, the long-time Defence Forces representative on the FAI Council, is the new president of the organisation.

McAnaney was elected at the association's EGM on Saturday in Dublin.

The Cork man was up against Sligo Rovers Chairman Martin Heraghty in the race to replace outgoing president Donal Conway.

McAnaney was elected after receiving the support of 88 of the 130 eligible voters. Heraghty received 40 votes, while two were spoiled.

Heraghty will remain as a member of the association's board after failing to be elected.

The election and Conway's departure marks the conclusion of the process of overhauling the association's board as was demanded by Minister for Sport Shane Ross.

Minister Ross had maintained that funding would not be restored to the embattled organisation until Conway stepped aside.

McAnaney previously ran against Paul Cooke for the position of vice-president in the summer, when he lost by 80 votes to 57. 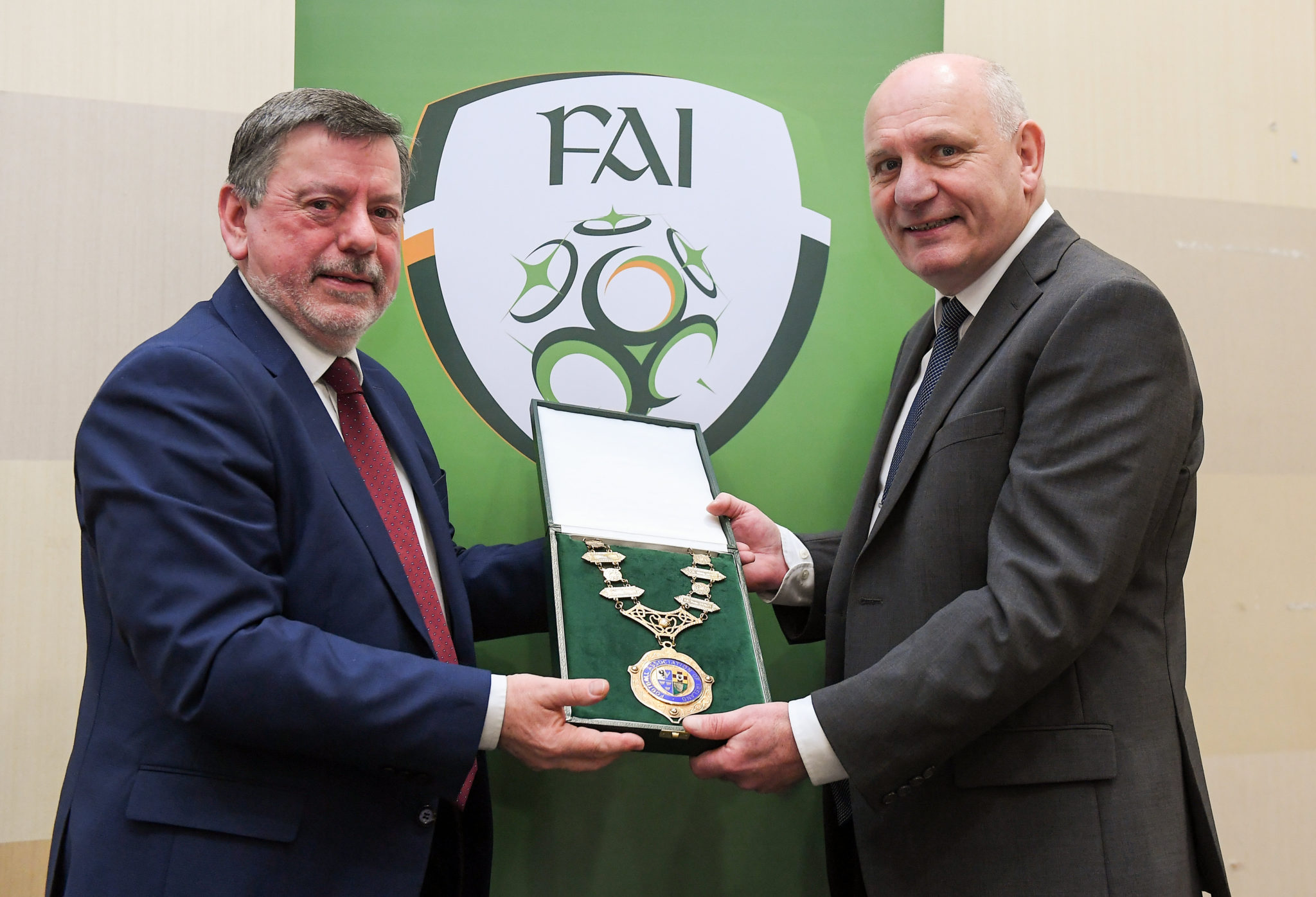 25 January 2020; Outgoing President of the FAI Donal Conway, left, presents President-elect Gerry McAnaney with the Presidential Chain of Office during an FAI EGM at the Crowne Plaza Hotel in Blanchardstown in Dublin. Photo by Matt Browne/Sportsfile

The former army officer played for Ireland at schoolboy level and in the League of Ireland with Cork City and Cobh Ramblers.

Speaking to Echolive prior to his election, McAnaney said his short term aim was to "get stability back in the organisation, and gain the confidence of the grassroots, supporters and stakeholders."

“We have to gain people’s trust and it would be my job to explain to people where we are at, why we need volunteers and why we need fresh blood.

“The association needs to change, we have to have structured change and get the right people," he detailed.

Donal Conway was re-elected unopposed as the organisation's president at July's AGM, however, increasing pressure to remove all those who had been associated with former FAI CEO John Delaney led to him announcing he would step down early.

Speaking at a meeting where the FAI published revised accounts last month, Conway recognised that his departure was in the best interests of the association.

"If I'm old guard as I have been clearly identified and I move aside, it can only be helpful," he said.

"We have talked about our approved financial statements today, the picture is bleak, I would accept."

The FAI's debt was revealed as €55 million at that meeting in December.

Donal Conway to step down from FAI President Role