England striker Marcus Rashford has written an open letter to Members of the British Parliament, ...

England striker Marcus Rashford has written an open letter to Members of the British Parliament, saying, "Please reconsider your decision to cancel the food voucher scheme over the Summer holiday period and guarantee the extension."

The Manchester United star shared the two-page open letter he penned, addressed to 'all MPs in Parliament', on his official Twitter and Instagram accounts. The post has received a huge response to date among his millions of followers on each social platform.

In the letter, Rashford tackled the food poverty crisis afflicting many families across the United Kingdom, referencing the '45% of children in Black and minority ethnic groups now in poverty' in England in 2020.

The 22-year-old cited his own upbringing under the care of his beloved mother who, despite working full-time on minimum wage to ensure that her family ate a meal each evening, struggled to cope, regardless of how hard she worked to support her children. 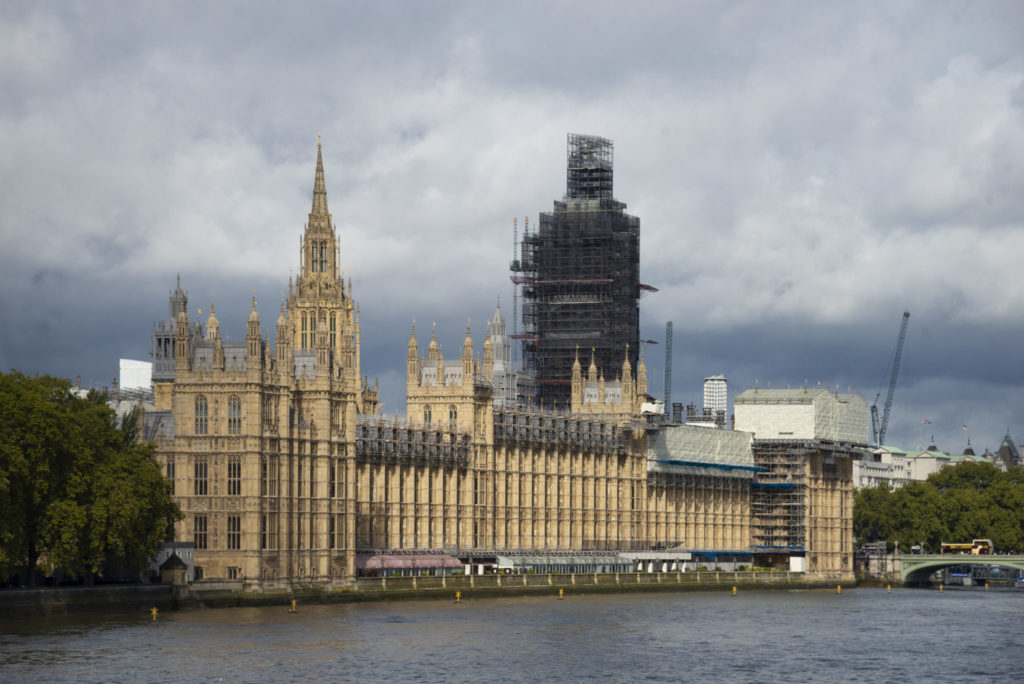 "As a family, we relied on breakfast clubs, free school meals, and the kind actions of neighbours and coaches", wrote Rashford.

"Food banks and soup kitchens were not alien to us; I recall very clearly our visits to Northern Moor to collect our Christmas dinners every year. It's only now that I really understand the enormous sacrifice my mum made in sending me away to live in digs aged 11, a decision no mother would ever make lightly."

Rashford has been heavily involved in helping to provide food to vulnerable families during COVID-19 with the nationwide closure of schools for an indefinite period amid the lockdown impacting a number of households across the country. Rashford has teamed up with FairShare - the link is on his Instagram bio - and has provided an alternative to school dinners by distributing three million meals a week to vulnerable families in Britain, a gesture Rashford says is still insufficient.

An Open Letter to all MPs in Parliament...#maketheUturn

He has labelled poverty in England as a "pandemic" and, in the latter, asked the British government, "Political affiliations aside, can we not all agree that no child should be going to bed hungry?", before continuing, "Whilst 1.3 million children in England are registered for free school meals, one quarter of these children have not been given any support since the school closures were ordered."

Since lockdown began, Rashford has become involved in a charity which has raised £20 million and helped feed hundreds of thousands of children while simultaneously launching a campaign to aid the homeless and has learned sign language in order to judge a poetry event in a deaf school.

Rashford has pleaded with the government in this letter to help and listen to those who have been struggling amid coronavirus, "During this pandemic, people are existing on a knife's edge: one missed bill is having a spiral effect, the anxiety and stress of knowing that poverty is the main driver of children ending up in care, a system that is designed to fail low-income families.

"Do you know how much courage it takes for a grown man to say, 'I can't cope' or 'I can't support my family'? Men, women, caregivers, are calling out for our help and we aren't listening". 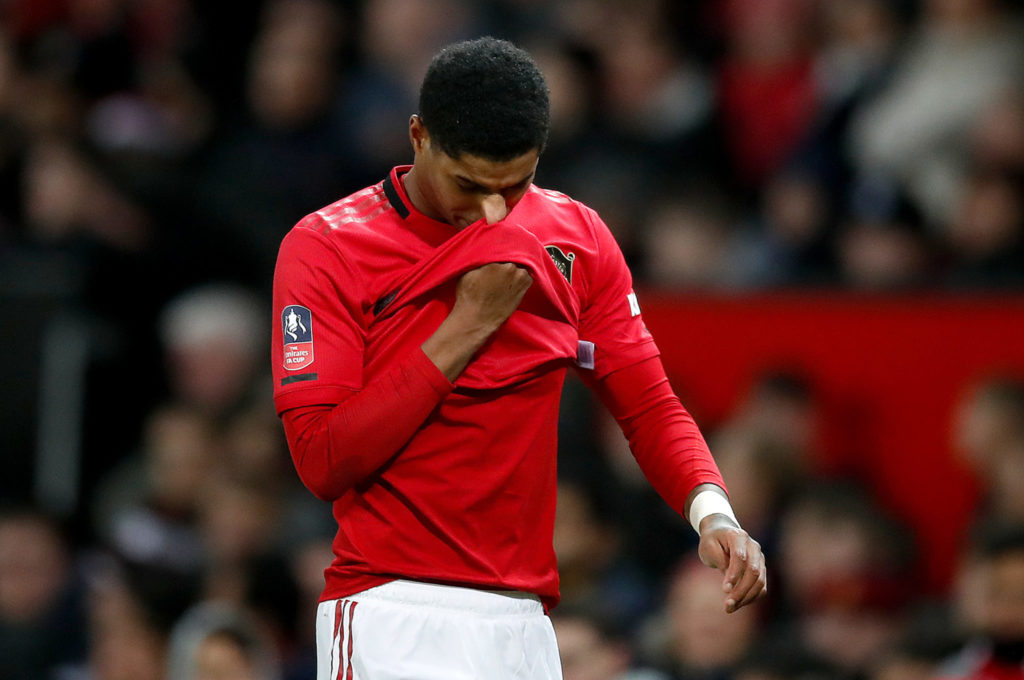 Manchester United's Marcus Rashford leaves the pitch after picking up a back injury during the FA Cup third round replay match at Old Trafford, Manchester.

Rashard restated in his letter how fortunate he has been with how his life has turned out, while requesting assistance from the government to do more.

"As a Black man from a low-income family in Wythenshawe, Manchester, I could have been just another statistic. Instead, due to the selfless actions of my mum, my family, my neighbours, and my coaches, the only stats I'm associated with are goals, appearances and caps.

"I would be doing myself, my family and my community an injustice if I didn't stand here today with my voice and my platform and ask you for help." 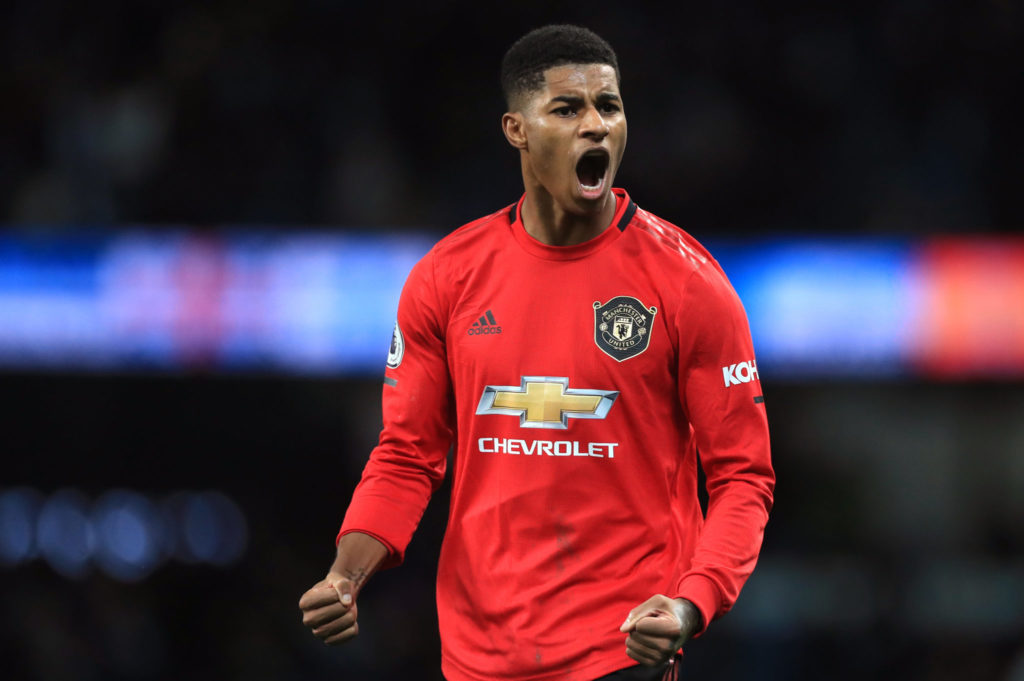 Manchester United's Marcus Rashford reacts after the final whistle during the Premier League match at the Etihad Stadium, Manchester.

The centre-forward burst onto the scene suddenly at Old Trafford in the 2015/16 campaign under the tutelage of Louis van Gaal, winning the Jimmy Hill Young Player of the Year award that season.

He has since become a central figure at Manchester United, making over 130 Premier League appearances, scoring 41 times and assisting a further 18 in the league along the way, while earning 38 England caps.

Despite playing in the post-Ferguson era, Rashford has enjoyed an impressive honours list at the club so far, winning the 2016 FA Cup, the 2017 League Cup and the 2017 Europa League title.