The Ligue 1 giants took the extraordinary step of putting out a press release warning supporters of the potential consequences for such posts.

Lyon are in Champions League last-16 action on Wednesday night, welcoming Juventus to the Groupama Stadium.

But the seven-time Ligue 1 champions, and the dominant domestic force in France in the noughties currently sit 7th in the table with last Friday's 2-0 win away to Metz their first win in five top-flight games.

As expected, the social media reaction among their fans has not been favourable with Garcia and Aulas often depicted as clowns in Twitter and Instagram posts. One quite benignly read, "The stadium will be empty as long as this clown (with Garcia pictured) on the bench." 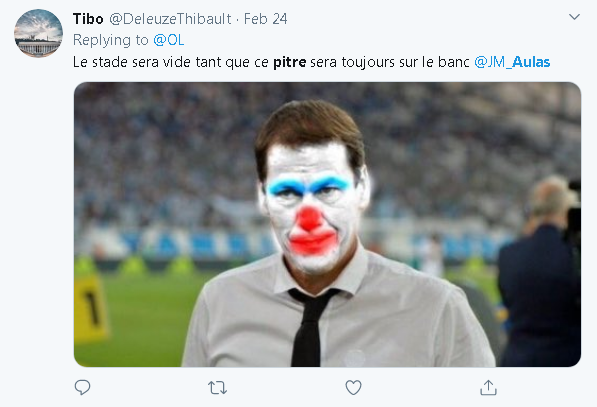 Speaking ahead of Juve's visit, Garcia seemed to be taking the criticism in his stride saying, "It's obvious (there was 'Garcia Bashing'), but that's society, not just football.

"There are things that can hurt your family. Me, I have thick skin.

"When you have trained in Rome, you can train everywhere", said the former AS Roma coach.

Garcia also conceded that Lyon's current position in Ligue 1 is "not acceptable" and doesn't match the ambitions of the club.

However, it appears Aulas' skin is not quite as thick as his manager's with the statement reading:

Olympique Lyonnais announces that the club will now file legal complaints for all content, posted or shared on its social networks, which may constitute abuse, defamation, threat, harassment or incitement to hate or violence (in relation to the club).

It is our duty to mobilise to fight against instances of discrimination and hate, online and on the field. OL will manage its responsibilities in this sense.

Mourinho not happy with long wait between games

Who is going to qualify for the Champions League?

"The crowd were shouting these monkey chants - it was awful"