"I just went down a different path, I'm one of the lucky ones" - Mark Quigley on his journey to the LOI

“My mindset was “I can’t wait to take this penalty because I’m going to score it and win the league”’, Mark Quigley recalls with unexpected calmness.

This sort of confidence is not something we normally associate with Irish players, but for Quigley, who grew up on Sean McDermott St in between Connolly Station and Sheriff Street, he had experienced pressure before.

The general area surrounding Mount Joy Square has produced some of the most technically gifted players this country has seen from Wes Hoolahan to Jack Byrne. These players have been moulded by the football played on the streets and come with a steeliness you wouldn’t expect from players with such delicate touches.

“I’d get home from school and the pitch was only two minutes away from my house so I’d just get my football and head out. By the time about half an hour passed, you’d have fifteen players and you’d be playing five-a-side games”, Quigley said speaking on Team 33.

“All anybody wanted to do was play football and everyone was good at football. It toughened you up. You’d be sitting there on a Wednesday and the older men, like your father’s age would be playing and you’d be praying they’d be down a man so you could hop in”

“They’d treat you the same as they would a normal man so you’d be getting put into the railings, so it toughened you up and you had to hone your skills”

It wouldn’t take long for Quigley to stand out from the crowd as clubs from across the pond came to look at the young Belvedere player and it couldn’t have come at a better time.

“Don’t get me wrong, I was no angel when I was younger. Stuff that went on and stuff that you did. Sometimes you follow people who are doing things they shouldn’t”, Quigley said.

Thankfully for Quigley, Millwall were able to spot this from early on and decided to bring him over earlier than his contract start date.

“I think I got to the age of 14 or 15 and Millwall, when they scouted me from Belvo, I think they took me over four or five months early because they heard I could have been going down the wrong path”

“Looking back now that was a godsend because if they had have waited until I was 16 when I was supposed to go over, you never know what I could’ve done stupidly or gotten in trouble”

“I just went down a different path. I’m one of the lucky ones. There are friends I know who didn’t go to England and were honest workers then there are friends who have committed crimes and stuff like that.”

“That’s just the way it is in an inner-city environment. You don’t hold grudges against your friends. They chose to do what they do and I chose to do what I do. Football was the escape, I don’t know where I’d be if I didn’t go to England.”

“I went away at a stage when the paths were very close together and you didn’t know which way I was going to go, so I’m glad I chose to go to England when I was 15”

There are many tales of woes and heartbreak when it comes to Irish teenagers going to England and after a couple of seasons at the club, management changes would impact Quigley's career and he was told he was no longer required.

“I remember going to an Oasis gig with the first team and they just took me in straight away. The managers liked me and I got on well. It was a good four and a half years there, I have a couple of regrets but that’s what happens in life.” 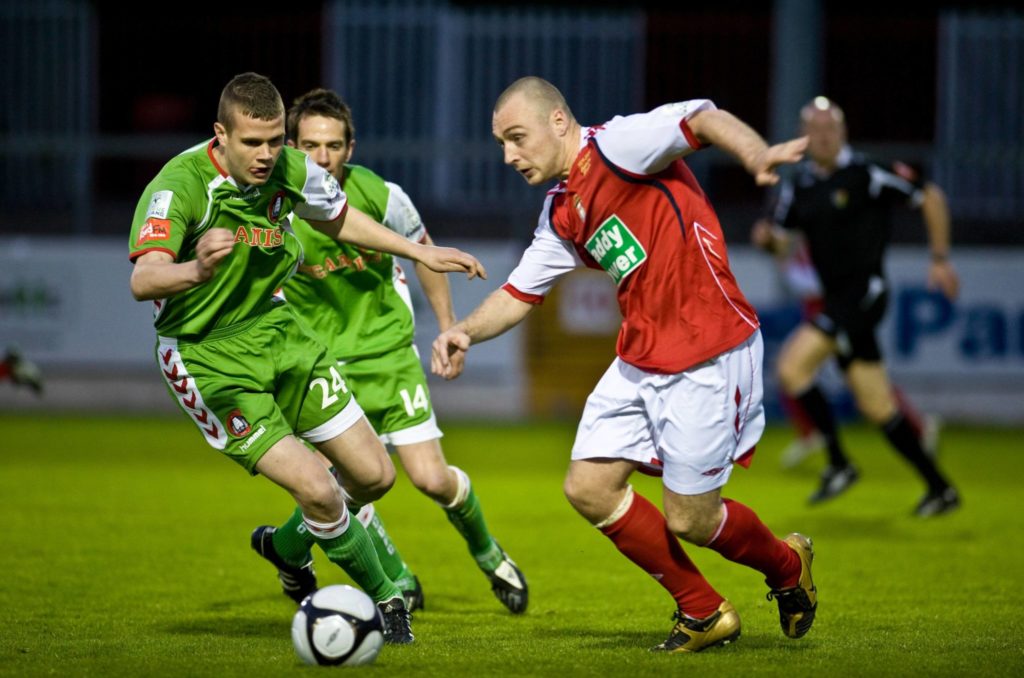 After returning home to Shamrock Rovers under Roddy Collins initially, Quigley signed for a St Pat’s side with Johnny McDonnell at the helm and started to shine almost immediately.

In his first two seasons at the club, he finished joint top-scorer and was voted PFAI Young Player of the Year as St Pat’s finished runners-up two years in a row.

Despite the great individual form, he wanted more. He felt he was good enough to win more and so after a few frustrating years at Bohemians first and then Dundalk. He signed for Sligo Rovers.

Ian Baraclough had taken over in the interim after Paul Cook left for Accrington Stanley and the club were on their way to their first title in 35 years. Standing in their way, Quigley’s old side St Patrick’s Athletic.

After taking a two-goal lead, it looked like the title was all but wrapped up for the Bit O’Reds but goals from Christy Fagan and Sean O’Connor left the game in the balance. Then Sligo were given a lifeline.

Conor McKenna was adjudged to have handled the ball in his own box.    St Pat’s fans to this day will argue that it wasn’t a penalty but the referee pointed to the spot regardless.

What went through Quigley’s mind as he stepped up to the spot?

“It was more enjoyment, it was more thinking to myself that this is a moment that you wait for. I remember the ref was taking his time going back and forward and I could hear lads behind me trying to have a bit of banter behind me, trying to get under my skin.”

“As soon as the penalty was awarded, I knew it was going in. It was meant to be for me to score that penalty so I had that in my mind. I knew where I was going to put the ball”

“I was getting stick off the St Pat’s fans which I usually did so it was nice to score against them. I made no hoo-hah about it, I didn’t shy away from it. The minute it was given, I ran and got the ball to take it. Scoring a penalty to win the league, it’s something you dream of.”

Here's the draw for the FA Cup semi-finals