Ireland and Australia played out a thrilling game in front of a sold-out crowd in Tallaght. What ...

Ireland and Australia played out a thrilling game in front of a sold-out crowd in Tallaght.

What was billed as a chance to welcome one of the best teams in the world turned into a famous 3-2 victory for Ireland.

Katie McCabe captained the home side on her 26th birthday, while Lucy Quinn made a big impression on her debut. Quinn's free-kick early in the game rebounded off the goalkeeper after hitting the post to give Ireland a 1-0 lead.

That was just the beginning of a game that was about as eventful as setting off fireworks in a field of landmines.

Own goals, egregious errors, wicked deflections, and some high-quality football were all on show in Tallaght tonight.

But how well did each Ireland player play?

Unfortunately for Brosnan, it's impossible to give her a good rating for this game despite many strong moments. Australia's first goal was inarguably her fault as she failed to react quick enough to a shot that went to her feet. She followed up that mistake by rashly running out for a ball that she didn't reach and by getting caught underneath a high ball on her goal line.

Those mistakes went unpunished but only by sheer good fortune.

O'Gorman was born to be a wing back. Her energy and speed down the right side was felt throughout the game. She was repeatedly first to the ball during the first half and set up some attacking platforms for Ireland with good passing. While playing faster than anyone else around her, she also made a handful of avoidable errors to prevent her from being the best player on the field.

After Ireland conceded their first goal of the game, Fahey almost provided the perfect response at the other end. She found space by the near post and beat the keeper to the ball, but just couldn't direct it into the net. Fahey was solid throughout the game, making more than one key interception to prevent Australia from building quick attacks through the middle.

Ireland's answer to Shane Duffy in more ways than one. Quinn showed off her prowess at set pieces with a headed goal that is typical of her career so far. Her size and ability to read the flight of the ball at the back post created major problems for the zonal defence Australia were employing. Quinn was just as imposing defensively, although she was caught out a couple of times in space.

One of those occasions led to a scramble defence situation where teammate Savannah McCarthy made two brilliant goalline clearances at the back post. 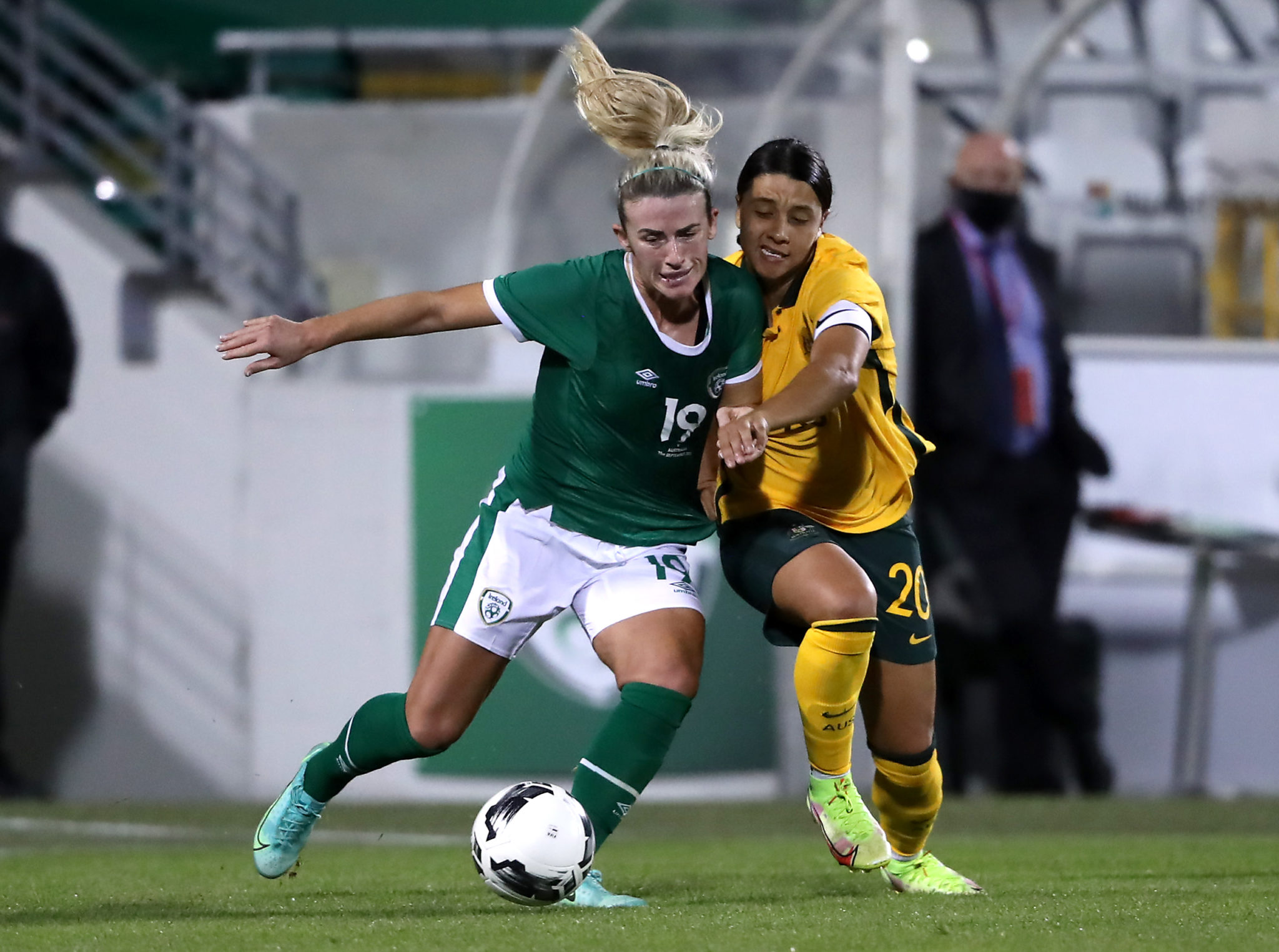 McCarthy wasn't directly at fault for either of Australia's goals but she definitely could have prevented them. The first saw her misjudge a ball from deep into the box and on the second she headed the ball straight to an Australian attacker on the edge of the box when she could have cleared it with her feet. Although those two mistakes were significant, she rarely put a foot wrong otherwise.

Her night was highlighted by those successive blocks off the goalline in the first half. McCarthy showed a willingness and desire to put her body in front of the ball throughout.

It wasn't the best game for Ireland's captain. She showed well in defence and held her positioning when Ireland conceded possession, but too often she was the one conceding possession unnecessarily. McCabe's leadership helped to guide Ireland in the second half as Vera Pauw's side managed their lead.

Although she didn't get onto the ball often enough to make a big impact for Ireland in attack, Finn worked tirelessly throughout the game and played a pivotal role in helping Ireland keep their shape.

With such an inexperienced team, Pauw intelligently put Denise O'Sullivan right in the center of her players. O'Sullivan was a deep-lying midfielder and it was notable from the start how much she was communicating with everyone around her. With that said, she still can't claim the second goal as her own. Her strike from the edge of the box was going well wide before it was deflected in off the post.

Typically tidy on the ball, O'Sullivan played well. Her positioning defensively was good although she really isn't the enforcer type in front of the back four.

It was almost a dream start for Barrett as she connected clean on a strike from just outside the box. She arrived late to a good cross from the right side, keeping the ball low and directing it towards the corner. The Australian keeper did well to push the ball away, although Ireland would score two plays later off a direct free kick.

Barrett was quiet after that point but she, along with her fellow midfielders, showed great energy and discipline to maintain Ireland's shape throughout and limit the quality of possession Australia enjoyed.

With her first touch, Quinn showed her pace down the right wing before getting in a good cross. It led to the first strike on goal from Amber Barrett. Almost immediately after, Quinn whipped a free kick around the wall that rebounded off the post and went in off the keeper. It was an outstanding strike regardless of who was credited with the goal.

Quinn should have scored when she volleyed a rebound off the crossbar into the stands from the penalty spot.

Payne had a quiet opening 20 minutes for Ireland before she showed her pace to win a ball in behind the defence. After a good first touch with her right foot, she set up to strike on goal with her left foot. The Australian keeper made a good point-blank save. Her pace would define her performance as she consistently offered Ireland an outlet and pressured the back four of Australia.

Farrelly was brought on to provide energy and solidify the midfield for Ireland. Her energy was there but she lacked the composure of Amber Barrett who she replaced. A fresh air shot then a mishit clearance in close succession of each other almost cost Ireland dearly.

Whelan wasn't on long but she offered Ireland an outlet by running into space. She had one particularly impressive touch that set up a good cross into the box, though nobody was there to take advantage of it.