Football manager Lisa Fallon spoke about the Republic of Ireland's upcoming Euros qualifier against the Ukraine on Friday at 5pm in Kyiv, Ukraine on Wednesday’s OTB AM.

Ireland can still qualify for Euro 2021, if they are able to earn a victory over the Ukraine on Friday evening.

Vera Pauw’s chargers have been in great form of late, with their only loss in the last four matches coming at the hands of Germany, who many believe to be the best team in the world at present.

The girls in green lost 3-0 to Germany last month, however this result would buoy the Irish side, as Germany had recently beat Ukraine and Greece 8-0 and 5-0 respectively.

Heading into Friday’s match, Ireland will be confident that they can recreate a similar performance to that of their last encounter with Ukraine in 2019, where they won 3-2.

Fallon believes that this is the most important match for the women’s national team for a very long time.

“I think this is the biggest game the women’s national team have ever had,” Fallon said.

“They have got themselves into an incredible position, but rightly so.

“We have had brilliant players in our squads over the years who never got to a major tournament, and it is such a shame.”

Fallon thinks that this group of players is the strongest that Ireland have been able to field.

“I don’t say that lightly, because we’ve had incredible players before.

“Collectively, as a unit, and with the structures that Vera has brought in with Eileen Gleeson alongside her, I think this is the very best opportunity we have ever had.

“We are in a fantastic place within the group, but at the same time Ukraine is going to be a really tough game.” 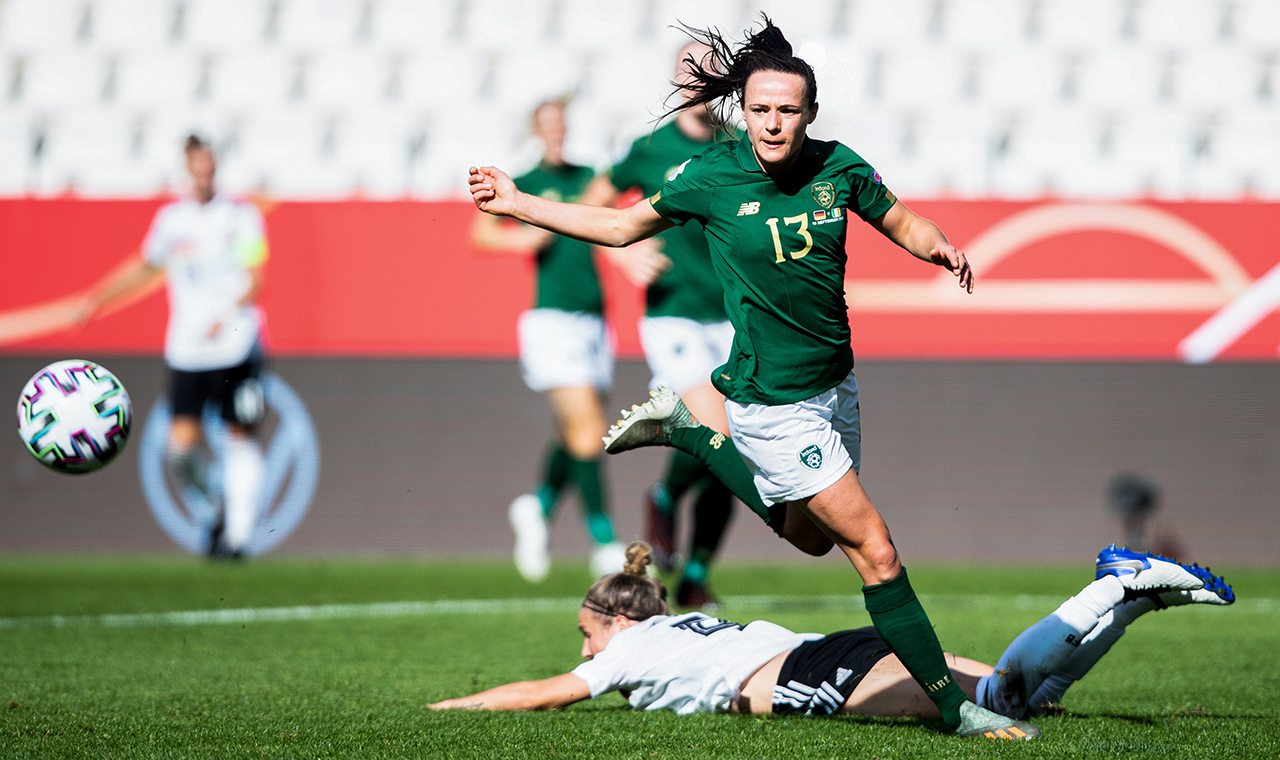 Aine O'Gorman of Republic of Ireland in action against Marina Hegering of Germany during the UEFA Women's 2021 European Championships Qualifier Group I match between Germany and Republic of Ireland at Stadion Essen in Essen, Germany. Photo by Marcel Kusch/Sportsfile

Fallon was one of the co-commentators in Dublin the last time that these two teams faced off.

She believes that the Ukraine are coming into the match underestimating what Ireland can do.

“I think the musings from the camp saying that the Ukraine probably underestimate them are bang on,” Fallon said.

“Ireland were 2-0 up in that game, Ukraine got back into it and we probably saw a bit more of what the Ukraine were about after we were 2-0 up.

“Certainly, their performances recently would indicate that they have improves as well.

“This game is not going to be a foregone conclusion by any stretch of the imagination.”

Fallon is particularly excited about the goal-scoring potential that Ireland have up front.

“We have some really exciting players, particularly within the forward division,” She said.

“We have got the likes of Denise O’Sullivan, who traditionally plays her football in the States, but she is currently on loan at Brighton.” 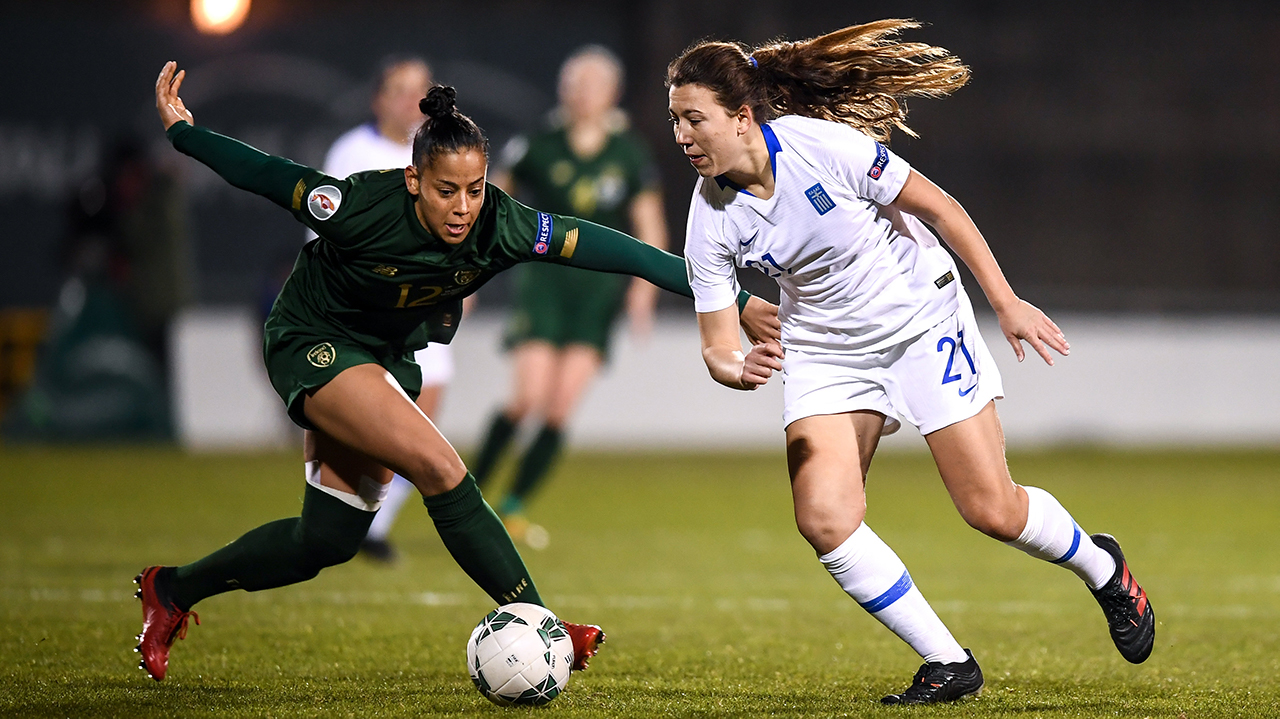 Despiona Chatzinikolaou of Greece and Rianna Jarrett of Republic of Ireland during the UEFA Women's 2021 European Championships Qualifier match between Republic of Ireland and Greece at Tallaght Stadium in Dublin. Photo by Stephen McCarthy/Sportsfile

Along with the energetic and always-active O’Sullivan, Pauw is able to call on the dynamic Rianna Jarrett in the number 10 position.

“She is playing there alongside Rianna Jarrett, who is a striker, and Rianna has come from Wexford,” Fallon said.

“Rianna is the player who has had an incredible story. She has done her ACL three times, she has come back, now in her mid-20s, in the prime of her career.

“She has been absolutely flying, she is the top scorer in the Women’s National League, and she has been scoring regularly.

“She scored in the last game against Ukraine.”

According to Fallon, Jarret, along with many of the players that played against Ukraine last year, has greatly improved over the last couple of months.

“[Jarrett] is in the best shape I’ve seen her in. She looks really fit; she looks really sharp; you can see the strength training that she is doing on a day to day basis,” Fallon said. 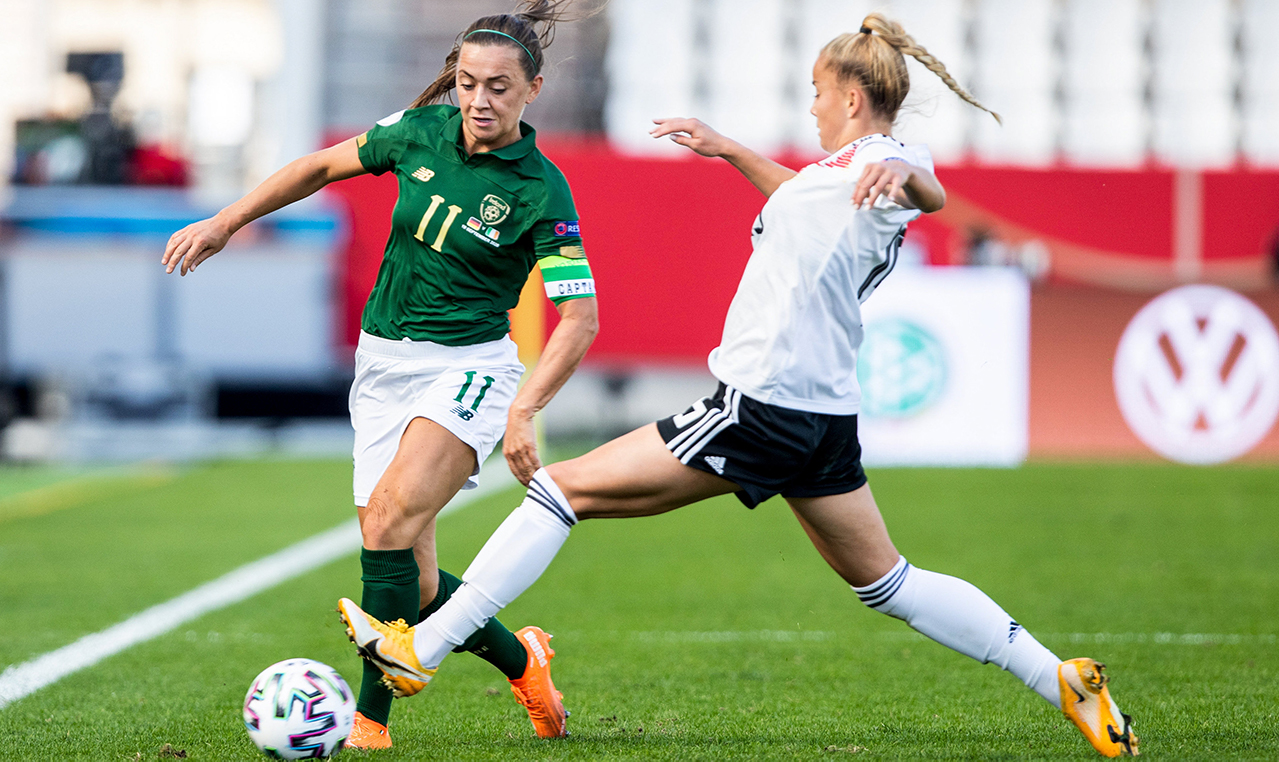 Katie McCabe of Republic of Ireland in action against Giulia Gwinn of Germany during the UEFA Women's 2021 European Championships Qualifier Group I match between Germany and Republic of Ireland at Stadion Essen in Essen, Germany. Photo by Marcel Kusch/Sportsfile

“Also, the quality of player that she is training with is bringing her game on massively.

“She is an incredible player, she plays as a left winger, very fast, very dynamic, incredible set piece deliveries, and will score goals from all sorts of ranges as we saw for Arsenal at the weekend.

“She is lethal from set pieces; her deliveries are excellent.

“We are a very fast, dynamic, counter-attacking team.

“We have players who like to get into the space in behind, run at players and take players on.”

But it is not just on attack that Fallon thinks Ireland are ahead of their rivals.

She believes that Pauw has been able to create a solid defensive structure in the Irish back three, which sets up their attack for counter-attacking opportunities.

“What Vera has done is she has shored us up structurally in terms of our defence, so that the players are all really well connected, have a structure and know their roles.

“Once we establish ourselves in the game, we have the opportunities to counter-attack into.”

O'Sullivan believes in miracles | Ireland gearing up for Germany

Heartbreak for Ireland as own goal sinks Pauw's side in Ukraine