How Ireland should line-up against Switzerland

It's a massive game for Ireland tonight as they face a strong Switzerland side fighting for the top spot in Group D. Ireland are sitting pretty at the top of the group having won three of their first four games.

However, with Switzerland still to play Georgia and Gibraltar, we can assume Mick McCarthy's men will need to claim some points in this meeting if they want to qualify for the Euros next year.

Here's who we here at Off the Ball think has the best chance of getting those points;

An easy choice for in the goals. The most experienced goalkeeper we have in the squad and an important member in the previous games. Randolph pulled off some good saves against Gibraltar in the first game and again in our draw against Denmark.

It's an odd situation Seamus Coleman finds himself in. A leader and automatic starter for both club and country over the last five years but is getting to the stage of his career when younger and fresher names are starting to challenge his position. He has let his performances do the talking for him though.

Richard Keogh has been the usual partner alongside Shane Duffy but for me, it's got to be time to give John Egan a chance. Has taken the step-up to the Premier League in his stride. Don't expect him to do any overlapping this evening, though.

An automatic starter at this stage. Always solid defensively, leads by example and, if you listen to the Danish players, Ireland's biggest goal threat.

Another player who hasn't been fazed by his move up to the Premier League with Sheffield United. Has grown in confidence in the Irish shirt in recent games, is solid defensively and isn't afraid to provide an option on the overlap down the left flank.

Made a move up to Scotland this year after a solid year with Aston Villa. Whelan has found a new lease of life under Mick McCarthy. No longer is he being used as just a hatchet man, he has been given some freedom to get on the ball too. The rock in the Irish midfielder.

Showed some signs of returning to the player we saw at the Euros against Georgia. He got on the ball and made some good runs, exactly what Ireland will need. He might need to help out with some of the dirty work tonight.

Hourihane might feel a little disappointed by his lack of game-time for Aston Villa this year. The arrival of Douglas Luiz to Villa Park this season has limited him to one appearance in the Premier League. He has made the most of his opportunity in the cup though, scoring two goals in Villa's 6-1 win over Crewe. He is still Ireland most well-rounded midfielder though and a constant threat from dead balls.

Ipswich have made a bright start to their League One campaign, sitting pretty at the top of the table. Judge's experience is what wins him his place in the starting line-up. Played the ball which led to Ireland's last-gasp goal against Denmark and can be Ireland's creative spark in the middle tonight again.

A bright spark for Ireland in the past but has been unlucky in terms of goals. Robinson has already got off the mark for Sheffield United in the Premier League. He may not be a prolific goalscorer but is in the team for his overall play more than goals.

Ireland's best player against Georgia. He was excellent up front by himself. Held up the ball well, got into the channels and gave the Georgia defence all sorts of problems. It could be a frustrating night for him again. 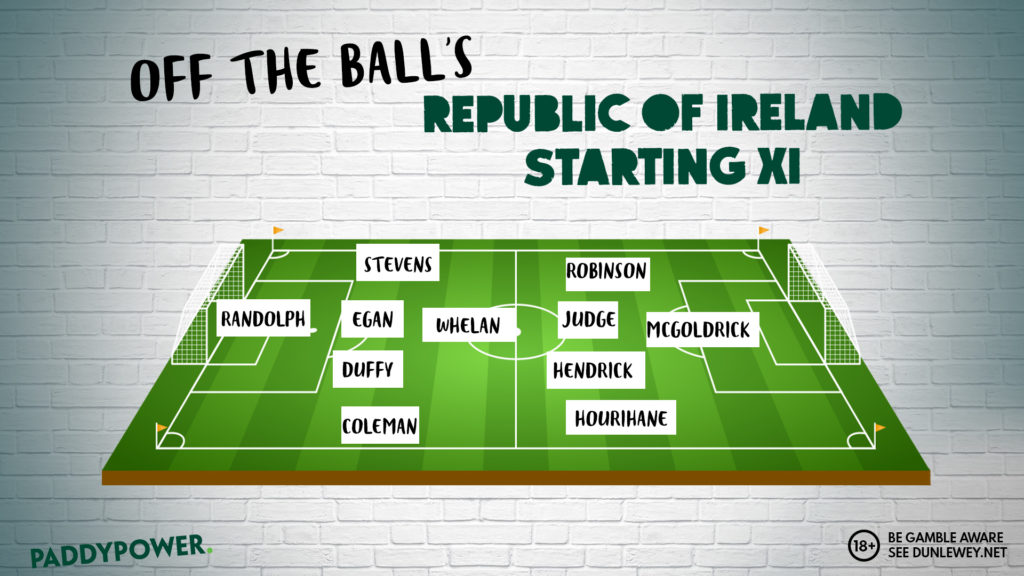