Ireland enjoyed a convincing victory over Qatar in a friendly at the Aviva Stadium. It is a resul...

Ireland enjoyed a convincing victory over Qatar in a friendly at the Aviva Stadium. It is a result that Stephen Kenny will welcome, but it would be an insult to training matches to even call this that.

Callum Robinson just can't stay out of the news lately and thankfully for Stephen Kenny, it's only for positive reasons on the field.

But it must also be noted that three of the five goals he's scored over the last two games have taken significant deflections.

His first goal against Qatar was almost a tribute to his second goal against Azerbaijan, this time it was an even more wicked deflection on a shot from outside the box that beat the keeper. His second goal was a penalty and his third was another big deflection after Jeff Hendrick played him in on goal.

Robinson's movement for the third goal was fantastic.

While the striker will get the headlines, the truth is this game was too easy from the start.

Qatar started the same team that started against Portugal on Saturday and their players looked tired from kick-off. Irish players had all the time they wanted on the ball, which allowed Jeff Hendrick and Conor Hourihane to play in the final third more than they have at any point previously for Ireland.

It was a complete contrast to the Azerbaijan game, where the home side then pressed Ireland high upfield.

Did Kelleher have as many touches in this game as Gavin Bazunu has saves for Ireland? He wasn't involved, so it's hard to rate him one way or another.

There's an unnatural composure and calmness to Andrew Omobamidele. Even against Qatar, he should struggle more with senior international football. But he doesn't. Everything looks easy for him. It's a wonder how he's not starting for Norwich.

Duffy had a quiet game for Ireland. That's a major positive considering just 12 months ago this type of game would have been a challenge for him. In those early Stephen Kenny games, Duffy looked uncomfortable on the ball, but now he's passing and moving in space easily. Maybe it's just being part of a back three instead of a back four, but regardless, it's working for Ireland right now.

There was never a question about his ability to make clearances and cut out passes.

Do we even need to mention when he scores from corners now? We just expect it at this stage. Duffy has now scored more goals for Ireland than John Giles, Matt Holland and Aiden McGeady did.

The Qatar threat, and calling it that is being generous, generally came down the opposite side to Egan. He had very little to do except keep the ball moving and hope he could latch onto a cross in the box from a set-piece. Everything he did was done well.

Doherty was at his roving best for Ireland from the start. Chidoze Ogbene ahead of him and Jeff Hendrick drifting out into space to work with him allowed Doherty to repeatedly find space in the final third. Doherty is playing really well for Ireland, so all we need now is for him to get back in the Tottenham team.

Or maybe he can move somewhere in January.

James McClean had an all-action performance for Ireland against Azerbaijan at the weekend. Enda Stevens lacked the action replacing him but was calm, intelligent and didn't put a foot wrong throughout the game. Stevens reminded Irish fans why he was a regular starter before being injured, now he just needs to play enough club games to get back there. 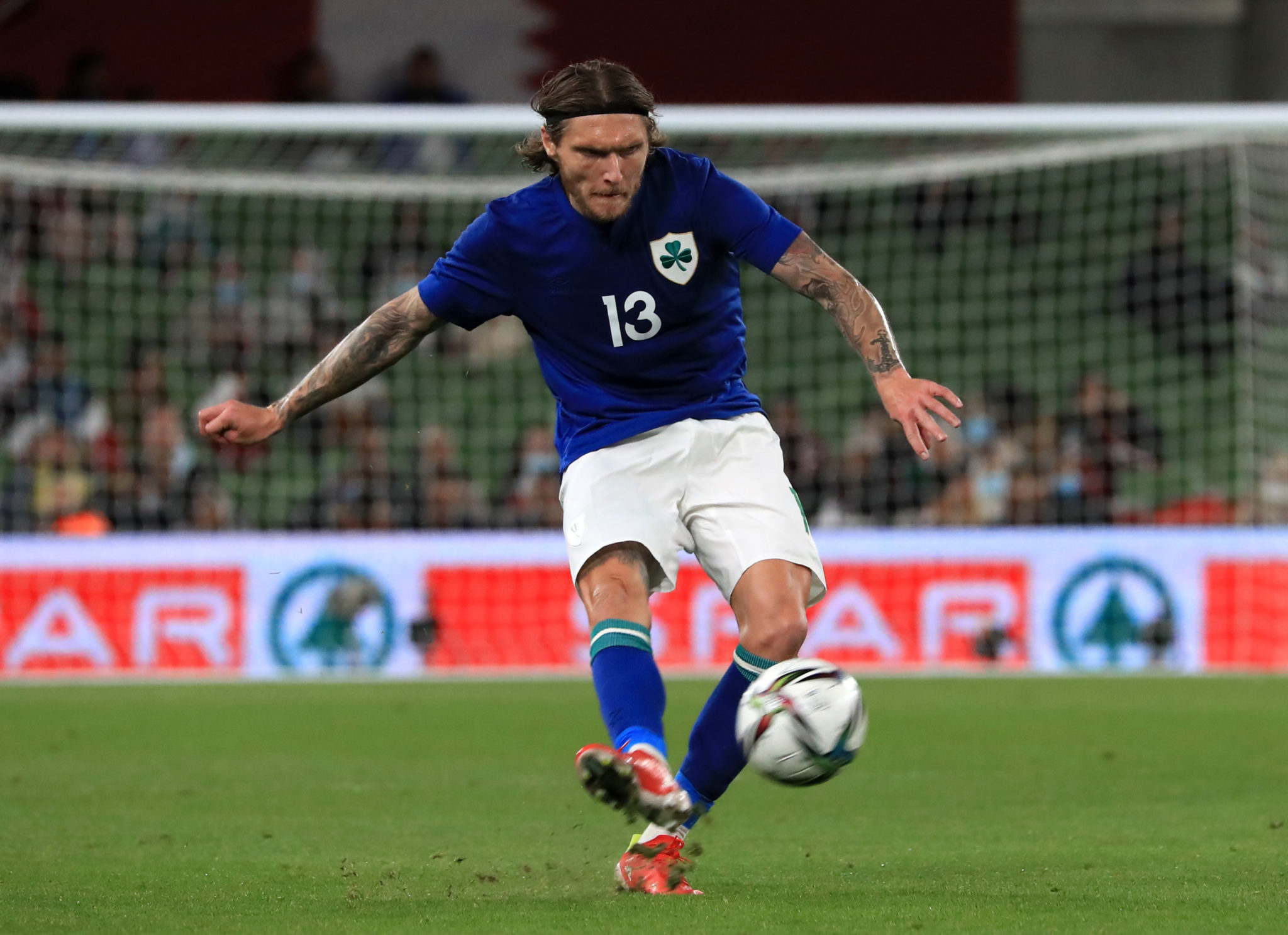 This looked more like 2016 Jeff Hendrick than anything we've seen since. It's likely because of how slow and largely uninterested the Qatar midfielders were, but still it was great to see Hendrick's technique and passing on show in the final third.

Hendrick's performance was topped off by his perfectly weighted assist for Robinson's third goal.

While we've always known that Hourihane has a wand of a left foot, we've not seen it often enough for Ireland throughout his career. With Ireland dominating the ball in this game, he had opportunities to show off. He nearly set Ogbene up for a goal with a dangerous cross early, before later finding the winger with a raking cross-field ball.

Hourihane stood out less than Hendrick, but he kept the ball moving smartly and played very well.

McGrath is an ideal link-up player in Ireland's attack. He's intelligent and comfortable on the ball in tight areas, which is what allowed him to earn the penalty in the first half. Although he didn't dive, McGrath did bait the defender into the tackle so he could create the penalty. He smartly stepped across the recovering defender so he inevitably took him down.

Despite being a pacey winger in theory, Ogbene's best work was done inside. His movement from outside-in was outstanding. He nearly latched onto a Conor Hourihane cross early in the first half before heading the ball off the crossbar in a similar position just before halftime.

Ogbene was outstanding from start to finish. He showed off pace, intelligence and great technique to keep the left side of the Qatar defence confused.

Scoring a hattrick for Ireland is a rare feat. How it comes about is inconsequential for the history books, but relevant for the player ratings. Since two of Robinson's goals were big deflections, it's hard to give him too much credit. The third goal was a penalty that he had no hand in winning. Robinson dispatched that penalty perfectly and deserves credit for that.

His movement and pace were a constant problem for the Qatar defence.

Robinson's hattrick is the first for an Irish player since Robbie Keane in 2014. Keane scored Ireland's last three hattricks, against Gibraltar in 2014, the Faroe Islands in 2013, and San Marino in 2006. We can add Qatar to that murderer's row of opposition.

Christie was caught out positionally once or twice but showed good energy working down the right side of the field. He linked up well with Hendrick and Ogbene to instigate one attack of note, but the eventual cross didn't reach Robinson in the middle. He almost set up Ireland's fifth goal when he broke down the right wing and pulled the ball back for Enda Stevens.

Hungary fans clash with police and stewards at Wembley.