Ireland enjoyed a 2-1 win over Finland thanks to star performances from Denise O'Sullivan and Katie McCabe.

Although it was an admirable performance against one of the best teams in the world, Ireland couldn't hold out for the draw at home. That put pressure on the side as they headed to Finland for their second game. There are four other teams in Ireland's group, Sweden, Finland, Slovakia and Georgia. Losing to Sweden didn't derail their campaign but Finland already had two wins going into this game.

Ireland needed a result. Pauw trusted the same starting 11 to get it. Her trust was rewarded.

Here are the Ireland player ratings.

Brosnan made one excellent save with her face on a shot that was ultimately ruled offside, but soon after that she nearly gave Finland an equalizer. Brosnan left her goal and didn't reach the ball, allowing Finland to set up a chance on the edge of the box. Luckily for Ireland, the ball was blazed over the bar.

Ireland did eventually concede when the ball was struck directly at the Ireland goalkeeper whose reactions were too slow to make the save. She should have done better.

Finland nearly scored a late equalizer when Brosnan was exposed again. She lost the ball in the air and relied on a teammate to clear the ball from the line behind her.

Working tirelessly in her role, O'Gorman was solid defensively and kept Ireland's shape throughout the game. But she was also too quick to cross the ball from deep. Unlike her counterpart at left wing back, O'Gorman looked out of her depth in the final third and needed to offer Ireland more with the ball. She was a key reason why neither Lucy Quinn nor Heather Payne could get into the game.

McCabe started the game sharply, winning the ball high upfield before putting in a dangerous cross that earned Ireland a corner. Ireland scored soon after. The ball stayed in the Finland final third after McCabe initially won it.

Finland equalized while McCabe was off the pitch. They immediately attacked the right-wing as if purposely targetting McCabe's absence. When she returned, McCabe quickly went to work again. She won the ball high upfield before going on a run into the box that led to a dangerous cross. The goalkeeper punched it away as no Irish player attacked the near post.

As Finland pressed forward, McCabe was more dangerous on the counter. She nearly scored when her searching shot from outside the box flashed past the far post. 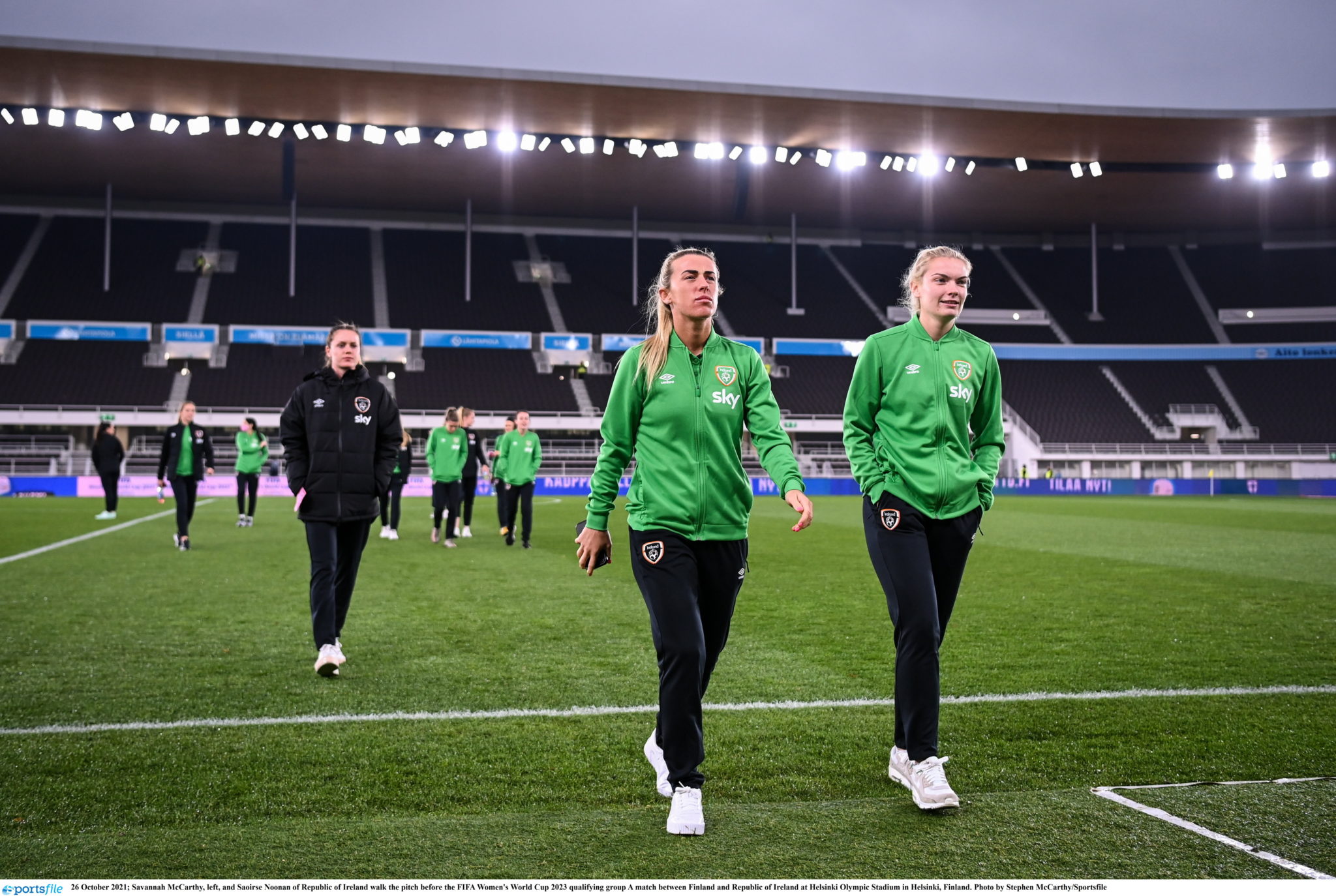 Few players on the field love a challenge as much as Savannah McCarthy. Shes' comfortable defending in space but was caught out once or twice by being too aggressive. McCarthy's speed is important in behind McCabe because of the wing back's eagerness to get forward. She repeatedly showed her value to Ireland in this game.

McCarthy was caught out for Finland's equalizer but it was largely a result of the team being down to 10 women at the time.

Playing in the center of a back three can often mean concentration is your biggest concern. Quinn went for long stretches of this game without the ball coming near her, but her positioning and concentration was good so when it did she was ready to clear it. Quinn is a model of consistency and leader for Ireland in the heart of their defence.

While solid in defence, Fahey could have shown up better in possession at different points of the game. The three at the back gave her time and space on the ball but she didn't use it smartly. Fahey made a crucial intervention in the six yard box when Finaldn threatened late in the second half. She understands how to read the game and that showed up in important moments for Ireland.

Denise O'Sullivan's ability to read the game and see space was on show early. She latched onto the ball twice on the edge of the box before Ireland's opening goal and played a key role in retaining possession in midfield throughout. When Katie McCabe was off getting treatment, O'Sullivan attempted to fill in for her at left wing back. She wasn't able to contain the Finland right winger, allowing her to break down the Irish defence. That led to the equalizing goal.

O'Sullivan was excellent in her own position and immediately made up for her mistake by pouncing on a loose ball in the opposition box. She nodded the ball in smartly at the back post. Her 13th goal for Ireland.

In Ireland's system, the central midfielders have to cover a lot of ground but don't necessarily get to dominate the ball. Ireland primarily play through O'Sullivan and their wing-backs, so Finn's role is to complement them with her positioning and work rate. Finn repeatedly stood out in the second half, winning the ball back multiple times as Finland pressed forward more.

Finn wasn't always found with the ball but she got forward well to support Ireland's attacking players.

Megan Connolly gave Ireland the perfect start when she whipped in a free-kick from the edge of the box. It may ultimately go down as an own goal because the ball hit the bar and rebounded in off the goalkeeper, but it was a sweet strike regardless. Connolly took a knock early in the second half. It wasn't a surprise because she had battled with the Finland midfielders throughout the game.

Connolly continued on but showed signs of the injury as her involvement dropped off.

It wasn't easy for Lucy Quinn to get into this game. She found little space in the middle of the field so she often found herself drifting out to the right side. Quinn showed her work rate and discipline to chase back when required but didn't get any opportunities to show her lethal finishing ability.

Quinn tried to find her place as the connection point between Heather Payne and the midfielders but was never really able to.

Payne had a thankless job for much of this game as Ireland provided her with limited service. Finland defenders faced constant pressure in possession and Ireland players always had an outlet to aim for because of Payne. O'Sullivan's goal was a result of Payne's cross from the byline. Payne did a lot with little service.

It was a fine Adam Idah impression.