How Ireland should line out against Denmark

It's the Danes again. If we play them one more time Oman might get worried that their record appe...

How Ireland should line out against Denmark

It's the Danes again. If we play them one more time Oman might get worried that their record appearances against Ireland might be under pressure. It's a massive game for Ireland though and our first test of this Euro Qualification campaign.

The starting line-up is vitally important as a result; here's how we think Mick McCarthy should line out.

Randolph has been solid for Middlesbrough all season and has cemented himself as Ireland's number one choice. He pulled off a world-class save against Gibraltar to keep Ireland in the game (yes, that really happened). An easy choice for between the sticks.

The debate that has taken up the headlines since Matt Doherty sprung onto the scene for Wolves. Mick McCarthy has hinted that Coleman would be his first choice at right-back and he wouldn't be playing both players. Coleman found some good form in the closing weeks of the season having weathered a sticky patch. Ireland will need his leadership on the pitch.

Derby County's Player of the Season, Keogh proved all year that he can play at a top level, despite the disappointment in the playoffs.

An automatic starter at this stage. Always solid defensively, leads by example and, if you listen to the Danish players, Ireland's biggest goal threat.

The best singer in the Sheffield United side that won promotion from the Championship this year. Stevens showed that he's not just a pretty voice though. He was impressive against Georgia in the Aviva Stadium a few months ago. Good on the ball and confident getting forward.

It seems strange now that Martin O'Neill essentially retired Glenn Whelan from international football. A pivotal player in Aston Villa's promotion this year and one of Ireland's best players in the Georgia game. We'll need him to do a lot of the dirty work in midfield. He'll have a tough game on his hands against Christian Eriksen.

Another Irish player that struggled for form throughout the season but finished strong for Burnley this year. He showed some signs of returning to the player we saw at the Euros against Georgia. He got on the ball and made some good runs, exactly what Ireland will need.

Scored the free-kick against Georgia and was a threat throughout. A player who has really come into his own over the season and can be Ireland's main man going forward in midfield. His ability from set-pieces will also be crucial if Ireland wants to nick a result.

Despite the disappointing performance against Gibraltar, I'm still convinced Matt Doherty and Seamus Coleman can play together down the right wing. Doherty can provide that extra cover in midfield should Ireland get overrun, plus he offers a creative spark down the right flank.

He wasn't fully fit for the match against Georgia but he still played pretty well. The left midfield position suits him more than left-back or centre-midfield. With Whelan providing more cover in behind it will give him a chance to go forward a bit more and relieve him from his defensive responsibilities.

Ireland's best player against Georgia. He was excellent up front by himself. Held up the ball well, got into the channels and gave the Georgia defence all sorts of problems. Denmark will be a true test of his abilities against top opposition. 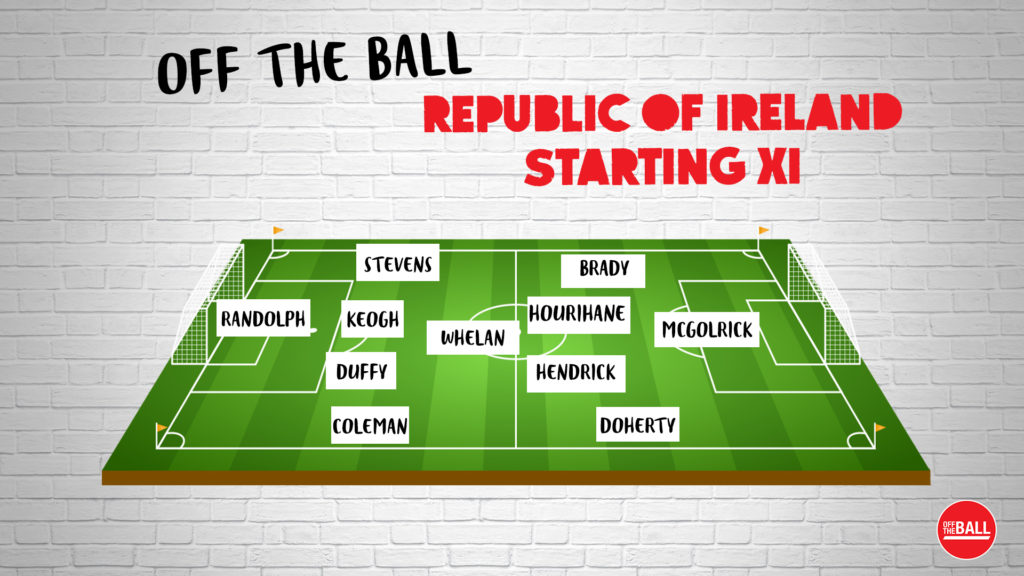