Stephen Kenny should pick an experimental Ireland on Tuesday

Stephen Kenny has plenty of options to choose from against Lithuania on Tuesday.

Stephen Kenny should pick an experimental Ireland on Tuesday

Stephen Kenny should pick a completely new team against Lithuania on Tuesday.

Ireland didn't get the result they hoped for on Saturday. A 2-2 draw against a second-string Belgium team is fine. It's neither overly impressive nor is it concerning in any way.

The draw should help Ireland's world ranking points. The fashion in which it came about should help the morale of the team. Ireland didn't sit back and invite Belgium onto them, they created opportunities and scored two spectacular goals. Chiedozie Ogbene was the best player on the field, while Alan Browne reminded fans of what he's capable of.

Kenny started the strongest team he could against Belgium. He will embrace his younger players against Lithuania.

Lithuania are 137th in the world rankings and have recently suffered heavy defeats to different teams. A 5-0 loss to Italy was expected, a 4-0 loss to Switzerland likely was too. But heavy losses against Kosovo, Latvia and Northern Ireland emphasize where Lithuania are.

Ireland can control the game and beat Lithuania like they did Qatar. They can do so with younger players starting too.

The Liverpool and Ireland goalkeeper didn't have a good game against Belgium. He didn't necessarily have a bad game either. Michy Batshuayi's strike was spectacular. Maybe Gavin Bazunu saves it, but it's highly unlikely. Sometimes you just have to credit the striker. The second goal was a deflection in the six-yard box, another impossible stop for Kelleher.

He played well with the ball at his feet, which is to be expected at this stage. He will have a quieter game against Lithuania.

Ireland's two goalkeepers will continue to push each other. The standards and expectations for both players are already through the roof.

If Dara O'Shea had been playing regular football prior to the Belgium game, one of Seamus Coleman or Shane Duffy would have been on the bench. It should be Duffy based on Saturday's performance. The young defender is a favourite of Stephen Kenny's. O'Shea offers Ireland a level of athleticism they otherwise lack at the back.

His aggression and ability to pick a pass aren't too shabby either.

O'Shea will play on the right side of the defence, so Collins can start in the middle. The big Burnley defender isn't playing often enough at club level yet, but he's en route to being a Premier League standard starter. At 20 years of age, a home start against Lithuania is the perfect next stepping stone for him.

Familiar faces in O'Shea and Kelleher around him will help too.

Suddenly the old man of the defence.

When Andrew Omobamidele and Dara O'Shea are healthy together, he'll get to start in the middle. For now, he's excelling as the left-sided defender in Ireland's back three. At 29 years of age, this game will give Egan an opportunity to be the leader of the team.

Ireland need to play differently against different teams. They must be adaptable. Kenny blooded players with versatile skill sets and that will open opportunities to move players around. Chiedozie Ogbene was the best player on the field Saturday, but his full potential is still unrealized. Kenny sees him as an attacker, but that doesn't mean he has to play upfront or on the wing.

Against teams where Ireland can expect to dominate possession, Ogbene should be employed as a wing back. He's smart enough and works hard enough to be effective in that role.

Ireland don't have an obvious emerging left wing back. James McClean still starting on Saturday was concerning, but there's no real clamour to get Ryan Manning on the field. If Liam Scales or Enda Stevens were available, it would be a different story. Switching wings for Doherty allows Ireland to experiment with their most potent attacking lineup.

Doherty had a relatively quiet game on Saturday but continues to be Ireland's best player under Stephen Kenny.

Josh Cullen is no longer a young player, but he's still benefiting from playing games. He's the fulcrum of Stephen Kenny's midfield and it's important for him to play with the younger players coming through. Similar to Egan, he will be in position to act as a leader for this younger side.

Cullen has broken into the team in the way that all of the younger players around him want to. He should be an inspiration for them to play alongside. 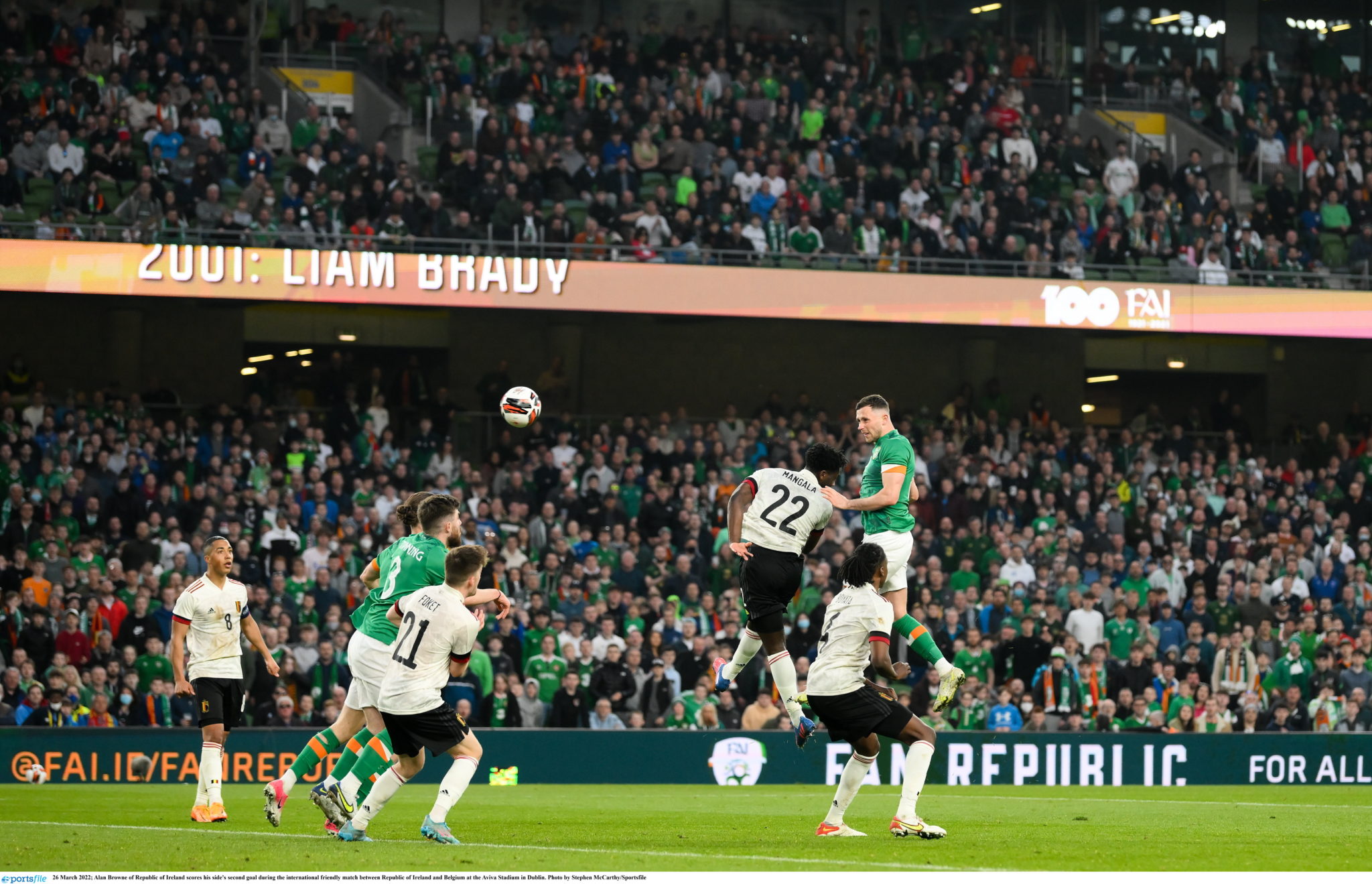 Stephen Kenny is clearly a big fan of Alan Browne. Kenny explained how he's only ever been absent when unavailable for selection after the Belgium game. While he's played only 18 times for Ireland and mostly off the bench, he's clearly Ireland's best midfielder at arriving into the box late.

Browne and Cullen could potentially be the perfect foils for each other. Jeff Hendrick will remain Ireland's preferred starter but Browne has an important role to play as a squad player. He's still only 26 years old.

Knight's quality is clear. He had one big chance early in the second half against Belgium that he turned down in favour of a pass inside. But the Belgium game mostly passed him by. He'll have more opportunities to run the game in the final third for Ireland against Lithuania. Knight is still just 21 years of age but the amount of Championship experience he has will actually make Lithuania a step down for him.

He doesn't need to prove anything and he's not under any pressure. But this is the perfect opportunity for Knight to showcase his quality.

The St. Mirren midfielder made the squad ahead of Jamie McGrath. But he didn't make the matchday squad on Saturday. That suggests Ronan will likely come off the bench rather than start on Tuesday. Regardless of whether he starts or comes off the bench, Ireland need Ronan to get experience at this level. His technical ability and potential to score and create goals is so appealing.

Parrott is not starting upfront each week for MK Dons. He didn't start upfront for Ireland's under-21 team either. He's not a striker in the traditional sense, but he's more than capable of leading the line for Ireland. He was very impressive when he started against New Zealand all those years ago and his two goals against Andorra show he's a threat at this level.

The 20-year-old remains a vital prospect for the future of Irish football.