Welcome to Lockdown 2.0, the second instalment of a potentially endless stream of lockdowns. Like the second season of Lost, you might feel that this is unquestionably going to be the part where we get a definitive conclusion to everything you have experienced, but it might just leave you with a permanent sense of psychosis instead.

So what is the difference between the first lockdown and the second lockdown? Well, to borrow a technical phrase of epidemiology: There is a shit load of sport happening this time. The heady days of making lists of movies that you will never watch are over, it is now time to do something productive with your lockdown life. It is time to sit on a couch for 12 hours straight and watch people do sport.

Here is your survival guide and schedule for the weekend ahead.

You will need: Three screens.

Friday is all about easing yourself into the weekend. It is time to say hello to your family. But it is also time to say goodbye to your family. Select the people in your bubble who also enjoy sport, bring them with you but say your goodbyes to everyone else. You will want to do this at 4.30pm at the very latest, and make sure to shut down any conversation before it gets going. Don’t be afraid to cut off your sport-hating brother mid-sentence. He will understand. There is a big international football match to watch, and there really is little time for anything else right now.

Ukraine vs Ireland (5pm kick-off time, RTÉ 2) is how we will start the weekend. The stakes are high enough, given qualification for Euro 2022 is at stake, but there is added pressure on the team given a defeat would almost certainly ruin your weekend.

You will then have, roughly, an hour to digest things. You could flick on Leinster’s Pro 14 clash with Zebre at 7.30, but I am advising you against this. Do something productive, like googling the recipe to a healthy dinner you would like to cook next week but absolutely won’t.

Nottingham Forest vs Derby is likely to have an Irish tint at 7.45, but Aston Villa vs Leeds United (8pm, BT Sport Box Office) is next up on the perfect schedule, as Leeds finally get to test their worth against a top two Premier League team. The Bourne Identity is on Virgin Media at 9pm if it’s shite.

This next piece of advice may shock you. Go to bed early. Get an early night. Forgo the Zoom quiz. A big bag of cans with your mates on a horrible delay can wait. A big night’s sleep before an enduring day of sport cannot.

It is a ridiculous weekend of live sport | #OTBAM pic.twitter.com/wgu6nGaCxR

Get up early. Go outside. Get some exercise. Listen to the birds sing. Listen to the stillness of Lockdown 2.0. Enjoy these sounds, because very shortly you are going inside for a long, long time.

Prepare a fruit bowl to sustain you for the next few hours. Have six litres of water on standby.

Remember: Any break in play means you sprint to the kettle. More coffee. Maybe take bathroom breaks if you want.

West Ham vs Manchester City (12.30pm, BT Sport) is how we begin. Will David Moyes dance for the second consecutive week? With 70 minutes on the clock, you want to be launching screen number 2 and screen number 3, for the Allianz Leagues are back.

Kerry vs Donegal (2pm, Eir Sport 1) and Cavan vs Roscommon (2pm, TG4) will go some way to deciding where the Division 1 and Division 2 titles will go. There might even be relegation consequences for both of the losers.

When West Ham vs Manchester City concludes, you can’t lose your focus. Get ready for Barcelona vs Real Madrid (3pm, Premier Sports) and the first El Clasico of the new La Liga season.

This is where things get complicated. We want to hope for a bit of “garbage time” in the GAA. We want to be switching one of those games over before full-time, because it’s Ireland vs Italy (3.30pm, Virgin Media One) in the Six Nations. Having Allianz Leagues and Six Nations games on the same day will force your body to go into February mode. Relax, it’s October. We’re two months from Christmas. Everything is going to be okay.

Enjoy the single screen life for a time. Basically all of the second half of Ireland vs Italy will have your undivided attention. Use this time to charge that device that always seems to be too far away from a power source. In even better news, it will be over just in time for Manchester United vs Chelsea (5.30pm, Sky Sports) where the winning manager will be hailed as the greatest thing since Johan Cruyff and the loser will be a victim of the mismanagement elsewhere in the club and absolved of all blame.

You can’t afford to get too comfortable, though. A wild GAA championship game is about to appear and there’s a surprise 2019 defeat to be avenged. Dublin vs Laois (6pm, Sky Sports Mix) could provide the sort of drama that isn’t deserving of second-screen status. But these are tough times and even hurling needs to settle for your very divided attention in 2020.

Triple screen time is upon us once again, and it’s over to the women’s Six Nations. Ireland vs Italy (6.30, RTÉ 2) will conclude our oval ball focus for Saturday, but the evening is just getting started. The closing stages will have to compete with Liverpool vs Sheffield United (8pm, Premier Sports) where a minute’s silence is expected for the passing of Virgil van Dijk.

Now, you will have noticed that I haven’t left any time for eating here. That is not a typo. I did tell you to have a big breakfast, so don’t come crying to me if you’ve collapsed from malnutrition. There is a window of opportunity here, though. At half-time of the Liverpool game, you have a 15-minute period of no sport. Use this time to heat up a microwaveable meal and text your family to tell them you are okay.

You’ll want to keep a second screen active during Liverpool - Sheffield United. Khabib vs Gaethjie (10pm, BT Sports Box Office) is slated for shortly after full-time, and this is the main event, not only of UFC 254, but of your entire day. If you make it to the inevitably bloody conclusion of this fight, you have made it to the end of this particular marathon. Press stop on Strava and chart it down as a personal best.

Spend 3 minutes (tops) catching up with your parents. Maybe say hello to your dog. But, really, we’re only halfway there and you need your sleep once more. Go to bed. 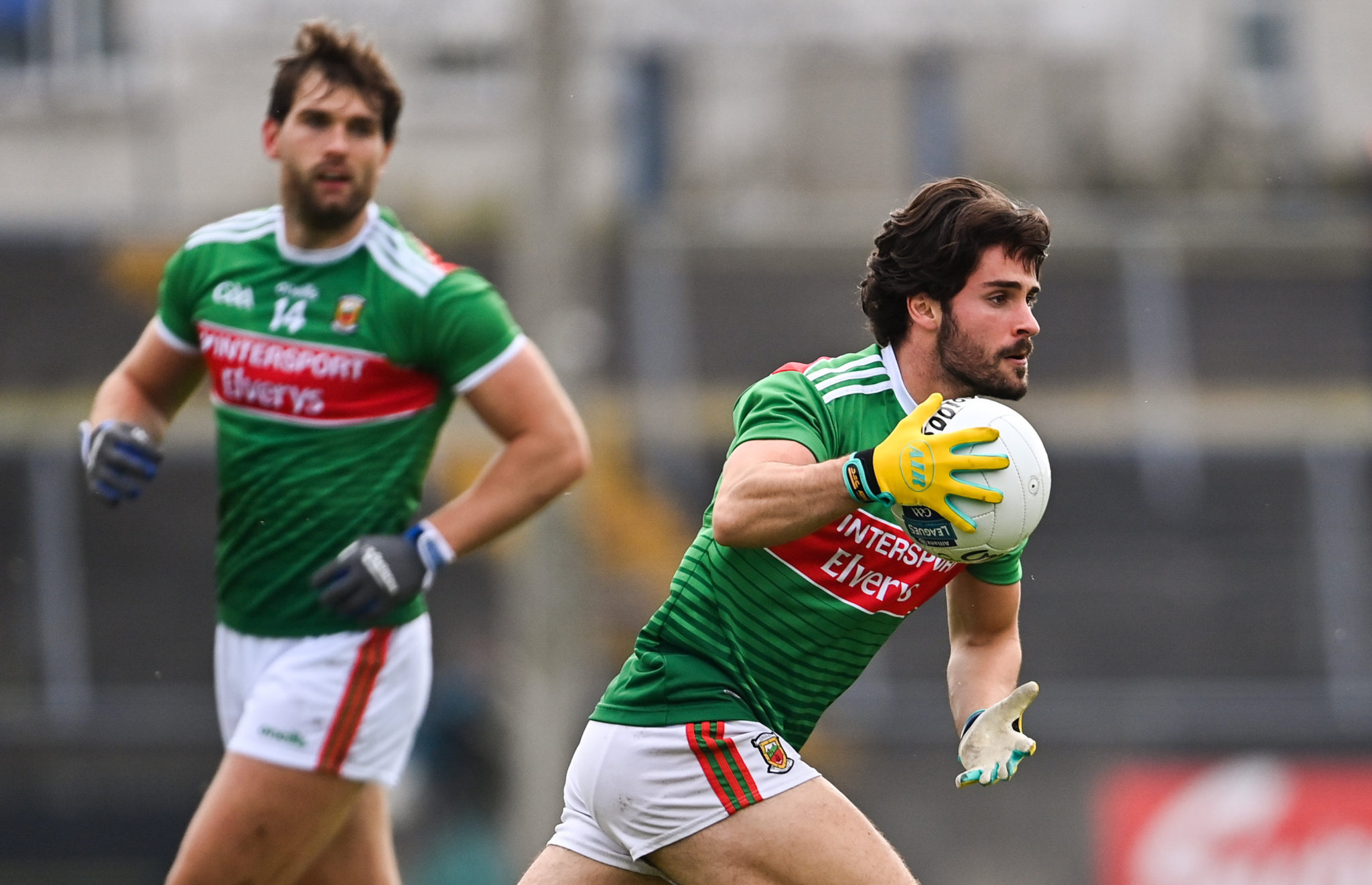 It is Sunday. It is cold outside. You wake up slightly groggy. That can mean only one thing: There MUST be Scottish Premiership on television right now. Aberdeen vs Celtic (12noon, Sky Sports) will bring us into the early afternoon, where it is very much time to have all your devices at the ready.

Southampton vs Everton (2pm, Sky Sports) gets the Premier League action underway, but you’re going to want to have Galway vs Dublin (2pm, TG4) on-screen too, as it’s a game that might decide Division 1 of the Allianz Football League.

Mayo vs Tyrone (2pm) and Monaghan vs Meath (2pm) both have deferred coverage on TG4, if you want to see the relegation drama unfold after it actually happens.

You’ll want to save the “main screen” for Clare vs Limerick (3.45pm, RTE 2), given everything ever seems to be on the line in this game. It’s a Championship match, it’s a National League match and the winner probably gets to keep Shannon airport.

It would, frankly, be rude to not have Wolves vs Newcastle (4.30pm, Sky Sports) on your third screen, before we head into an evening of American football where someone’s 0 has got to go in Nashville. Pittsburgh Steelers @ Tennessee Titans (5pm, Sky Sports) is a face-off between two of the three remaining unbeaten teams in the NFL. Let’s face it, though. You’re going to bottle it and just watch Redzone instead, aren’t you?

Titans - Steelers will firmly be a “second screen” job, due to the fact that Arsenal vs Leicester (7.15pm, Sky Sports Box Office) is a game in the 2020/21 Premier League season and therefore has an 80% chance of being absolutely mental.

Back in the land of the free and the home of the brave, Seahawks @ Cardinals (8.05pm, Sky Sports) is a big NFC West matchup and should take you nicely to the point where you’d rather gouge your eyes out than watch another second of sport. Happy bank holiday weekend, everyone.