'He's struggled recently, it looks like maybe his confidence has been hit. There's been sections of the crowd getting on his back'

On Wednesday's OTB AM, The Daily Mail's Dominic King said a dip in form was always going to inevitable for the Donegal native.

"I wouldn't like to be the one to say he's finished," he said. "I've seen him develop over the last 10 years, I think Everton had the best two full backs in the country for a spell.

"The injury he received was horrific and the form he showed when he came back this time last year we terrific.

"He's struggled recently, it looks like maybe his confidence has been hit. There's been sections of the crowd getting on his back.

"I think there was always going to be a point when you come back from a long-term injury that he was going to have a blip. I hope he gets through it, he's a great lad. He loves Everton, they've made his life for him."

He's struggled recently, it looks like maybe his confidence has been hit 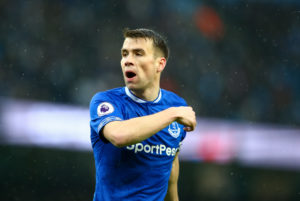 Seamus Coleman was dropped for Everton's defeat to Leicester City on Tuesday night.

In contrast, Matt Doherty has been in terrific form for Wolves in the Premier League - starting regularly and joins Shane Duffy as Ireland's top league scorer.

We discussed whether or not Doherty deserves to be Ireland's starting right-back in the wake of Coleman's lull in form. You can catch up on this full chat below.

If we factor in that Seamus Coleman was dropped for Everton's defeat to Leicester City and Matt Doherty continues to shine at Wolves - who should Ireland's first choice right-back be? 🤔

Should Seamus Coleman been given the benefit of the doubt that it is a temporary dip in form or should McCarthy seriously consider a situation where Doherty is Ireland's first-choice right-back.