Former Women’s National League winner Ruth Fahy was on OTB AM this morning and spoke about the controversy surrounding Ada Hegerberg.

The Ballon d’Or winner has refused to play for her country at this year’s women’s World Cup over complaints about how the Norwegian national side is run.

While Fahy would prefer to focus on the football being played at the World Cup, she did have her say on the 23-year-old superstar, who currently lines out for Lyon in the French league.

“Imagine if Messi or Ronaldo weren’t at the men’s World Cup, it’s not something that you’ll ever stop talking about during the campaign.

“A lot of high profile Norwegian stars have actually come out and slammed Hegerberg for continuing to talk about this. The issue is that they’re claiming its not clear why she’s walked away.

“She’s cited a lot of general factors, all extremely valid, but she hasn’t said this is what happened, this is what needs to be done. It hasn’t been clear and they’re slamming her for this,” Fahy explained.

Hegerberg originally walked away from the side in 2017 after Norway crashed out of Euro 2017 without scoring a single goal in any of their three matches.

She explained her decision in an Instagram post at the time saying, “the decision is not only a consequence of this year's European Championship, but is based on my experiences with the national teams over a long period of time.”

Shortly after Hegerberg quit the national team, the Norwegian federation granted equal pay to its male and female players, which doubled the women's wages. Members of the men’s national team took pay cuts to allow this to happen.

However, this wasn’t enough to bring Hegerberg back to the international set-up and she explained that her decision to walk away was not about money.

Hegerberg has been the subject of criticism from both pundits and players alike. Norway and Real Madrid midfielder Martin Odegaard didn’t pull any punches when talking about the world’s best female player.

"Being able to represent your country at the World Cup is one of the biggest honours in football. Your teammates deserve better,” Odegaard said about his fellow Norwegian on Instagram.

In a podcast with the Olympic Channel, Hegerberg said that she had been dragged down by teammates and the people around her in the Norway set-up.

“I was super motivated to become even greater on the pitch, and to succeed.” The federation, she said, “doesn’t live up to expectations to move the women up.”

Hegerberg said that she greatly regretted having to walk away from her national side but that she felt compelled to take a stand over what she felt was the poor state of women’s football in her home country.

“I’m still a proud Norwegian. I love my country, I miss representing my country. That explains the whole situation, I feel, because I didn’t ask to be in this position. But that’s the reality.

“My connection to Norway is the same as always. It’s just that I don’t play for the national team,” she said on the Olympic podcast. 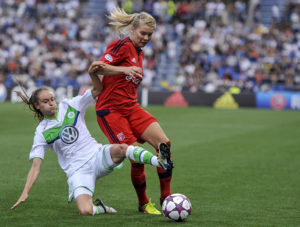 While Fahy wants the focus to be on the players who are playing in the World Cup, she fully understood why Hegerberg’s story was garnering so much attention.

“I’m sure back in Norway there’s probably an awful lot of discussion about it, probably quite split, similar to our own Keane-Saipan saga.

“For me, I’d like to just focus on the games now. Hegerberg’s not coming back to the campaign, but maybe afterwards we can wrap it up and see if we can get her back in the team and get her back on the international stage where she should be,” Fahy said.

Even without the Ballon d’Or-winning striker, Fahy believes Norway are in a good place and can make an impact on the tournament.

“I think it would be better to just focus on the games and focus on who they do have because they’ve got some cracking players.

“The World Cup has started and Norway have launched their campaign. They’ve got their first win and they’ve got an absolutely massive game on Wednesday [against France] and maybe the whole conversation about Hegerberg should be shut down,” Fahy commented.

Norway take on the hosts France tomorrow night, knowing that a win would see them emerge as genuine contenders for the tournament.

English FA to challenge FIFA in court over Chelsea punishment