Gary Breen has criticised the 'flippant' nature of Eden Hazard's Carabao Cup final panenka penalty and says the effort reflects poorly on the character of this current Chelsea squad.

Speaking on Wednesday morning's #OTBAM with Eoin Sheahan and Ger Gilroy, the former Ireland international said the effort was "a nonsense" considering the high-stakes nature of the match.

"You'll probably call me a kill-joy, but the way that Hazard took that penalty - that if they missed they lost the Cup - to try that chip just shows everything about Chelsea at the moment," he said.

"They're all about themselves them players. Yeah it was cool, but if you're a player you're thinking: 'Just put it in the back of the net.'

"Why even put it at risk like that? It's a nonsense. There's a time and a place for it. You can do it on the pitch. I think he's executed it well, but it's the flippancy with which he took it.

"That sums him up. He might be thinking: 'If I miss it, it doesn't really matter.'"

Yeah it was cool, but if you're a player you're thinking: 'Just put it in the back of the net.' 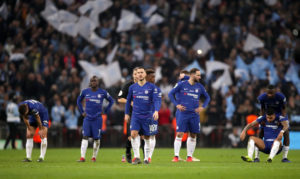 David Luiz and Jorginho were the two to miss their spot kicks as Chelsea went on to lose Sunday's League Cup final to Manchester City.

Pep Guardiola's side lifted the first silverware of the season on offer this year via penalty shootout after a scoreless 120 minutes.

Chelsea now face Tottenham this evening, knowing a win could take them into the top four should Arsenal and Manchester United both suffer shock defeats to Bournemouth and Crystal Palace respectively.

Questions also remain as to whether Chelsea boss Maurizio Sarri will opt to start Kepa Arrizabalaga following the goalkeepers refusal to be subbed off during the defeat to City.