The final pairing for the Off The Ball Greatest Aviva Moment has been revealed, it will be a clash of brilliant domestic moments.

In Friday's final the penalty heroics of Sligo's Ciarán Kelly look to continue their incredible run in this series, having already seen off Leo Messi.

The Bit o' Red's goalkeeping masterclass will take on that late goal by Seani Maguire for Cork City against Dundalk in the 2016 FAI Cup final.

Here's the second semi-final in our search for the 'Greatest Aviva Moment' 🇮🇪@JonWalters19 vs Bosnia or Sean Maguire (@CorkCityFC) vs Dundalk in the FAI Cup final? Voting is open until 7pm! @AVIVAIRELAND has been the proud sponsor of the Aviva Stadium since 2010 #SafeToDream

Maguire's effort that day was of the great performances from his Cork City hey-day, as Dundalk were winning all around them at the time. Seani Maguire inspired his side to an FAI Cup final win in 2016.

Shortly before departing Cork for Preston North End throughout the following season, Maguire's late winner in the Aviva Stadium teed John Caulfield's side up for a successful run at the title next time out. 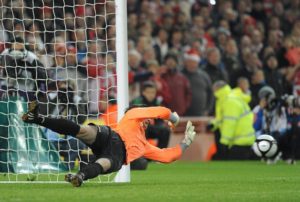 Will the goal be good enough to get past Ciaran Kelly? The goalkeeper saved four penalties in a crucial FAI Cup final shootout.

Earlier in the week Off The Ball caught up with the Sligo Rovers legend, Ciaran Kelly recalled his thought processes throughout that shootout.

"It was one penalty at a time, I was trying to speak to myself," he recalled of the 2010 clash. "I didn't look at our penalties, for the main reason that I didn't want to get emotionally involved in the shoot-out."

It's going to be: Seani Maguire's late goal for @CorkCityFC

In the 'Greatest Aviva Moment' decider

Poll will be live tomorrow!@AVIVAIRELAND
has been the proud sponsor of the Aviva Stadium since 2010 #SafeToDream https://t.co/9M6EbRhPEm

After saving three of Shamrock Rovers' penalties in the shoot-out, he even allowed his mind to drift a bit when it came to the decisive fourth.

"I know it's probably a little bit cheeky, but I was thinking [about] how we were going to celebrate," he admitted. "That's how confident I felt at that moment in time prior to the kick."

Merseyside police "ready" for any home Liverpool or Everton games