Senior lecturer of sport Dr Katie Liston joined the Sunday Paper Review on Off The Ball to discuss Denise O'Sullivan and the concept of girls playing football with boys at a young age.

When Republic of Ireland manager Vera Pauw spoke on OTB AM in August, she suggested that it was important for young girls to play football with boys at early age, only separating the two when they become teenagers.

She cited her own experiences not having a girls’ team to play for and coaching women with different backgrounds of playing in girls-only teams and mixed teams.

Similar to Pauw, current Republic of Ireland star Denise O'Sullivan also grew up playing with boys until she found a girls’ team to play for as a teenager.

Liston believes that this is the reason that O'Sullivan is arguably not only the best Irish player, but is ‘the best player on the pitch’.

“[O'Sullivan is] a phenomenal player, and you can see her personality coming out on the pitch,” Liston said.

“All you can see is the blonde ponytail bobbing constantly… she doesn’t stop.”

O'Sullivan grew up playing street soccer with her older brothers and other boys from a young age, as there were no girls teams for her in her area. 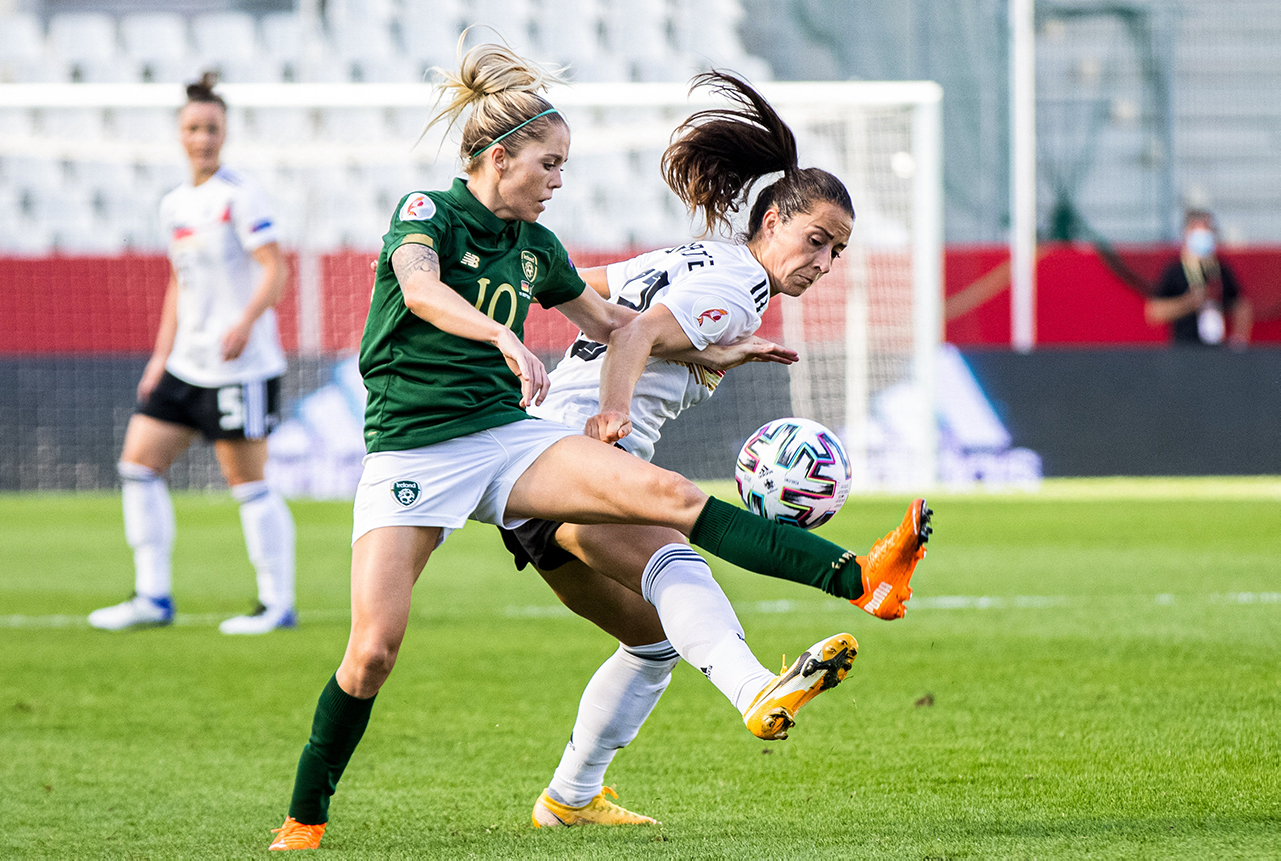 Denise O'Sullivan of Republic of Ireland in action against Sara Däbritz of Germany during the UEFA Women's 2021 European Championships Qualifier Group I match between Germany and Republic of Ireland at Stadion Essen in Essen, Germany. Photo by Marcel Kusch/Sportsfile

While there have been developments made since then that have allowed for the creation of girls-only academies and teams, the question of whether that is a productive move for the women’s game was raised.

“There are a couple of things that concern me going forward,” Liston said.

“At the elite level of talent, the extent to which we may become reliant on players like Denise and others based abroad [can create a gap between local and foreign-based players].

“There is a gap that begins to appear between the level that they can achieve and our own Women’s National League.”

In addition to those concerns, Liston thinks that there are still many girls that don’t have a team or academy to play for, meaning that they still have to play with boys.

“That generation hasn’t gone yet; the extent to which you would describe a young girl today who has the opportunity to go straight into an academy or a girls’ football team at school,” Liston said.

“It is not necessarily the case.”

She argued that, if that does become the case, then women’s football might suffer.

“The physiological research and all of the technical work that has been done would say that boys and girls alike benefit from being able to play [together],” Liston said. 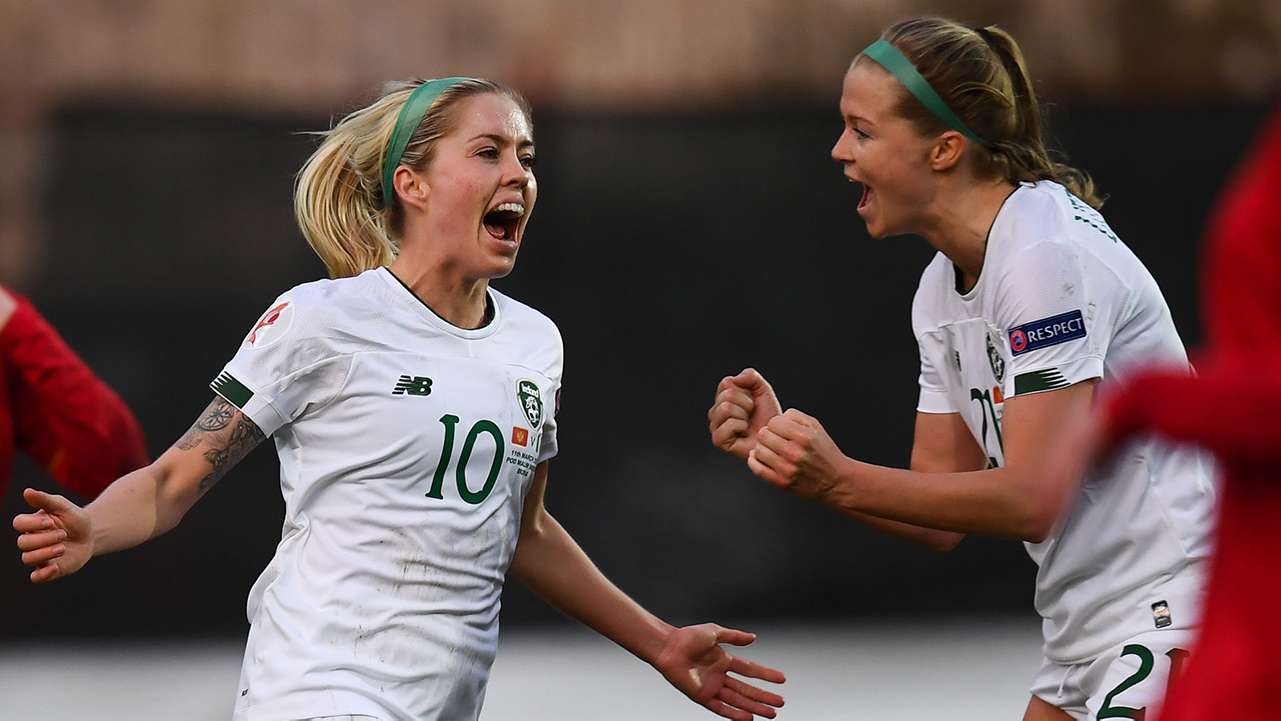 Denise O'Sullivan of Republic of Ireland celebrates after scoring her side's third goal with team-mate Ruesha Littlejohn, right, during the UEFA Women's 2021 European Championships Qualifier match between Montenegro and Republic of Ireland at Pod Malim Brdom in Petrovac, Montenegro. Photo by Stephen McCarthy/Sportsfile

Journalist Dion Fanning, who joined Liston on the Sunday Paper Review, mentioned the importance of visibility in the growing support for the women’s team.

“[Having the women’s matches on TV] demonstrates the power and the necessity of actually promoting the game,” Fanning said.

“The idea that ‘people aren’t interested’, or that people don’t want to know [about women’s sport] is disproved by the response when games are shown, and games are publicised.

“There is a huge opportunity; we have seen it globally with women’s football, the opportunity it has for growth.

“There is a huge opportunity for the women’s game here if it is backed and if it is funded for players to be at the forefront of that.”

Fanning suggested that, if Ireland can get more players to the standard of O'Sullivan, then the women’s team will have a massive impact on participation and support for women’s football.

“[Denise O'Sullivan’s] story is remarkable, and her journey and the clubs she has been to means we do have players at clubs that have potential to be successful.

“If the Irish team can be successful that will be massive, not just in terms of participation, which is important, but in terms of becoming a hugely popular sport.

“It is something that needs to be recognised as really a potential growth area, and when it is on television, people respond to it.

“It is important to understand that that’s how it works.”

Giovagnoli blames himself for not tweaking tired Dundalk in Molde loss

'Everton could be the closest to Liverpool this year' | John Giles

Euro 2021: Montenegro v Rep of Ireland - all you need to know